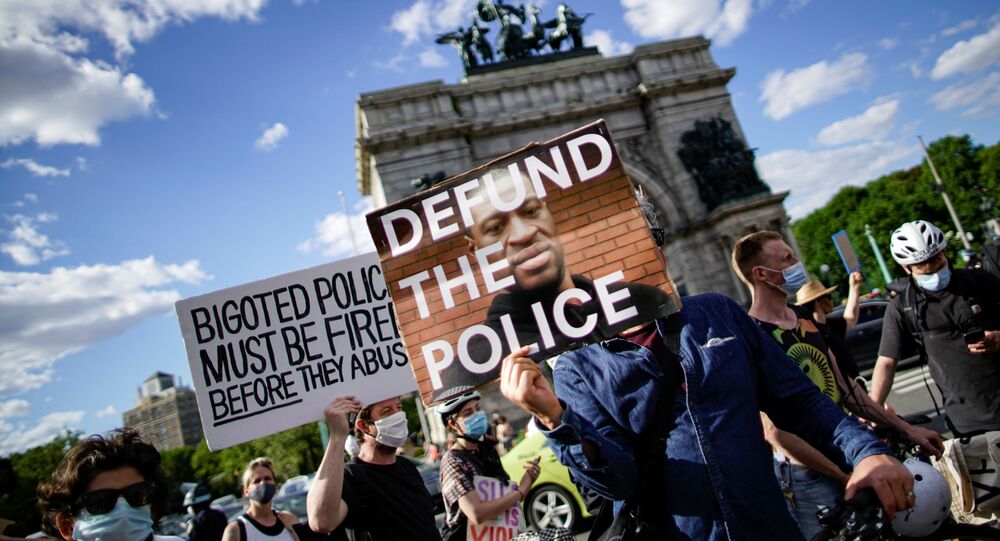 In the wake of the death of George Floyd - who died after a white police officer knelt on his neck for almost nine minutes - there have been calls for radical change. The Democrats want to reform law enforcement but some activists want to go further and “defund” the police. What is going on?

Around US$115 billion was spent on policing and prisons in by state and local governments in 2017, according to data compiled by the Urban Institute.

The figure does not include the money the federal government spends on the FBI, ATF or DEA and many radical activists in the US are questioning whether they get value for money.

These people are garbage! pic.twitter.com/ExKcSZdMDx

​In the light of George Floyd’s death two schools of thought have come forward from the liberal wing of US politics, while President Trump and the Republicans have largely focused attention on rioters and the involvement of Antifa.

The Democratic Party, and its nominee for the White House, Joe Biden, has called for reform of police departments across the country.

The money to create housing for the homeless and better fund public education in 2 of our biggest cities is right there.

​Its moderate programme - the Justice and Policing Act 2020 - was unveiled by Nancy Pelosi on Monday, 8 June.

Who is Training US Police Officers?

It would ban the chokehold - a method of restraint which has led to the deaths of several African-American men, most famously Eric Garner in New York in 2014 - would make it easier to prosecute officers for abuses and would also change the way they are recruited and trained.

In the last two weeks several sources have highlighted the work of Dave Grossman, a retired US Army ranger and West Point instructor, whose Bulletproof Mind course has been blamed for making American police officers too aggressive and trigger-happy.

© AFP 2021 / EVA MARIE UZCATEGUI
Police officers kneel during a rally in Coral Gables, Florida on May 30, 2020 in response to the recent death of George Floyd, an unarmed black man who died while being arrested and pinned to the ground by a Minneapolis police officer.

Hundreds of law enforcement agencies and police departments have sent their officers on Grossman’s courses in the last 22 years, including Jeronimo Yanez, the officer who shot and killed Philando Castile in Minnesota in 2016. Yanez was later acquitted of second-degree manslaughter.

Karen Bass, chair of the Congressional Black Caucus, said: "A profession where you have the power to kill should be a profession that requires highly trained officers who are accountable to the public."

Biden has said he "supports the urgent need for reform” but the Justice and Policing Act is unlikely to be passed by a Republican-dominated Congress.

The legislation, which was introduced by two African-American senators, Cory Booker and Kamala Harris, would also make it mandatory for federal officers to use body cameras and dashboard cameras. Congress does not have the power to enforce this on local police or sheriffs.

What if Police Departments Cannot Be Reformed?

But the Democrats’ proposed reforms do not go nearly far enough for many Black Lives Matters activists, who are pushing a new agenda - “defunding.”

On Sunday, 7 June, Minneapolis City Council decided - against the objections of the Mayor Jacob Frey - to defund and disband the city’s police department.

The council’s president, Lisa Bender, said: “We committed to dismantling policing as we know it in the city of Minneapolis and to rebuild with our community a new model of public safety that actually keeps our community safe.”

CNN interviewer Alisyn Camerota asked Ms Bender: “What if, in the middle of the night, my home is broken into. Who do I call?”

Minneapolis City Council President Lisa Bender on the intent to defund and dismantle the city’s police department: “[We] have looked up ways we can shift the response away from our armed police officers... the groundwork is laid already.” https://t.co/h0eSepelHE pic.twitter.com/wBASgjsIbq

​Ms Bender, a Democrat, did not answer the question directly but claimed: “I hear that loud and clear from a lot of my neighbours and myself too, and I know that that comes from a place of privilege.”

But Ms Bender also praised politicians in Camden, New Jersey, who disbanded the city’s police force only to replace it with a new force that covered Camden County.

President Donald Trump has been keen to use Minneapolis decision and the calls for defending to portray the Democrats as soft on crime.

​Trump could well get traction with that narrative but some voters - not just African-Americans or Democrats - may be attracted to the idea of reducing funding for police departments and spending it on housing, education or tax cuts.

The co-founder of Black Lives Matter, Alicia Garza, told NBC: "Why can't we look at how it is that we reorganise our priorities, so people don't have to be in the streets during a national pandemic?"

Last month Alex S. Vitale, a Professor of Sociology and Coordinator of the Policing and Social Justice Project at Brooklyn College, said there needed to be a radical re-think of policing in the US.

He told Sputnik: "The difference in political parties is expressed only in terms of the willingness of many Democrats to waste millions of dollars on pointless procedural reforms like implicit bias training, civilian review boards, and community policing, while Republicans prefer to rhetorically support the 'thin blue line'."

The MPD150 pressure group, which supports the idea of a “police-free Minneapolis” says it wants “strategically reallocating resources, funding, and responsibility away from police and toward community-based models of safety, support, and prevention.''

When we talk about abolition here in Minneapolis, we're not talking about rebranding police, or privatizing police, or "community policing," or any of the reform tactics that could potentially be used to undermine this work. We're talking about building a police-free future.

​But MPD150 does not explain who would investigate a rape, murder or armed robbery in a police-free Minneapolis or who would run into a school in the city to take out a gunman if there was a mass shooting.

Congressman Bass told CNN: “I don't believe that you should disband police departments. But I do think that, in cities, in states, we need to look at how we are spending the resources and invest more in our communities. Maybe this is an opportunity to re-envision public safety.”

What Happens if You Cut Police Budgets?

The Mayor of New York, Bill de Blasio said at the weekend he planned to move some of the police’s funding into social services and youth initiatives.

The Mayor of Los Angeles, Eric Garcetti - the son of the prosecutor who failed to get a murder conviction for OJ Simpson - said he would cut up to US$150 million from the LAPD budget.

Police unions have been quick to deride “defunding.”

President Trump - who says he plans to restart campaign rallies next month - is expected to defend police forces across the country and might suggest to voters that a Biden victory in November could embolden street gangs like the MS-13, the Bloods and the Crips and boost other organised crime syndicates like the Hells Angels, the Bandidos and the almost-dormant Cosa Nostra.