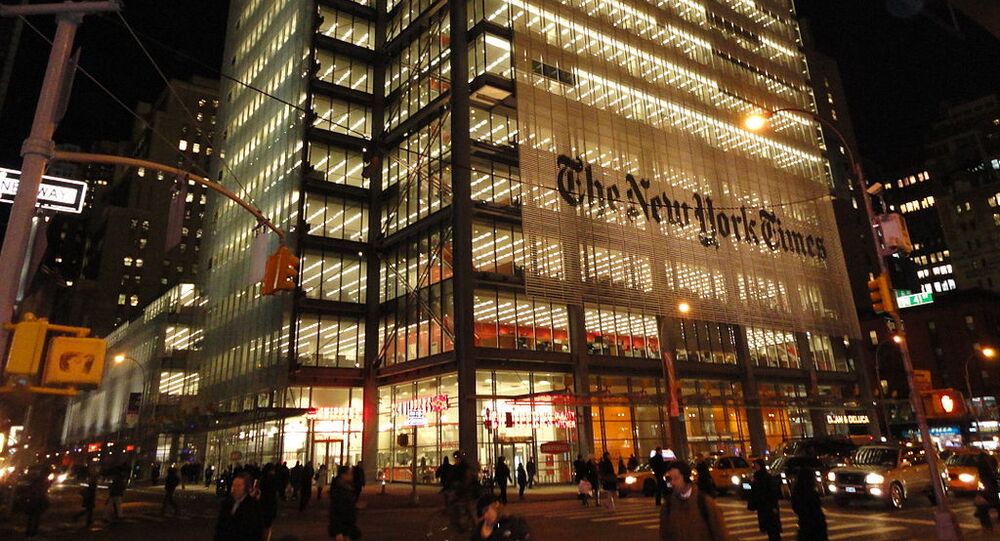 The op-ed that raised unrest in the editorial office of the New York Times was written by GOP Senator Tom Cotton of Arkansas and called for using military force to quell ongoing and widespread protests against police brutality over the death of George Floyd. Earlier, opinion editor James Bennet defended the piece and apologized.

The New York Times announced on Sunday that James Bennet has stepped down as editorial page editor, after far-ranging discontent in the company following the publication of an opinion piece that "called for military force against protesters in American cities".

Following Bennet's resignation, US President Donald Trump tweeted praise for the author of the op-ed that caused the controversy, Senator Tom Cotton, as "excellent", calling for "transparency" and again declaring The NYT "fake news".

Opinion Editor at @nytimes just walked out. That’s right, he quit over the excellent Op-Ed penned by our great Senator @TomCottonAR. TRANSPARENCY! The State of Arkansas is very proud of Tom. The New York Times is Fake News!!!

​In a note to staff, NYT publisher A.G. Sulzberger said that after the "significant breakdown in our editing process", there was agreement for a new team to "lead the department through a period of considerable change" between him and Bennet.

“Last week we saw a significant breakdown in our editing processes, not the first we’ve experienced in recent years. James and I agreed that it would take a new team to lead the department through a period of considerable change.”, the note said, cited by The New York Times.

Sulzberger outlined that Katie Kingsbury, previously a deputy for the post, would be acting as the editorial page editor through the November election, as Jim Dao, a deputy who oversaw the op-eds, will also step down, switching back to a job in the newsroom.

Commenting on statement by the The New York Times on Bennet's resignation, Cotton tweeted that his op-ed was falsely interpreted, and the suggested that the paper should "retract" if it "has any decency left".

This is false and offensive.

I called for using military force as a backup—only if police are overwhelmed—to stop riots, not to be used against protesters.

If @nytimes has any decency left, they should retract this smear. https://t.co/9qJLgWSwlP

Cotton's opinion article published by Nytimes.com that cost Bennet his job used the headline 'Send in the Troops' - the title, however, was written by the NYT team, not the author, and was later labeled in the editor's note as being "incendiary". In the op-ed, Cotton called for the deployment of US military troops to quell protests that have turned into, according to the author - a decorated soldier - an "orgy of violence", citing historical precedents to use the 1807 Insurrection Act - a federal law allowing a US president to deploy military within the country. Some poll results showed a significant amount of participants supported troop deployment.

​Bennet apologized last week for earlier defending the piece, as Cotton slammed The New York Times for distancing itself from the article, criticizing the newsroom for getting "triggered if they're presented with any opinion contrary to their own".