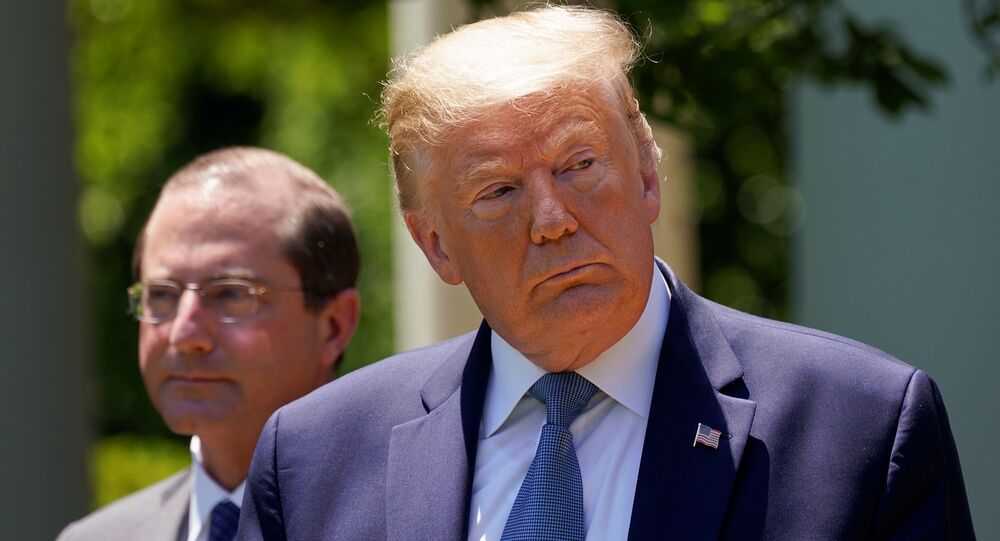 On 1 June US President Donald Trump said he would mobilize “all federal resources, civilian and military”, to quell protests against police brutality raging across America after the death of black man George Floyd, urging state governors to deploy the National Guard in great numbers to “dominate the streets.”

US President Donald Trump wanted to deploy 10,000 troops to control protests in Washington, D.C., this week, according to officials familiar with the matter, cited by The Washington Post and CBS News.

“We need to get control of the streets. We need 10,000 troops up here [in Washington]. I want it right now,” Trump reportedly said according to a Pentagon official.

The source is claimed to have revealed that Attorney General Bill Barr, Defense Secretary Mark Esper and Joint Chiefs of Staff Chairman Gen. Mark Milley strongly advised the US President against the move at a meeting in the oval office on 1 June.

There has not been any official comment from the White House on the current report.

A senior Department of Defense (DoD) official was further cited by CBS News as disclosing that besides the troop deployment request, Donald Trump had bellowed at Mark Esper for refusing to support the idea of using the Insurrection Act to quell protests sweeping the country after the death of African American man, George Floyd, in police detention in Minnesota on 25 May.

© AP Photo / Elaine Thompson
Demonstrator Kathy Woodward holds up a sign as she protests police actions, Thursday, June 4, 2020, in Seattle, following protests over the death of George Floyd, a black man who died after being restrained by Minneapolis police officers on May 25.

The legislation, dating back to 1807, would grant the president the right to deploy US military nationwide for the purposes of domestic law enforcement.

Previously, Donald Trump said he was mulling invoking the act to quell the nationwide protests, yet Mark Esper announced on 3 June he did not support using the legislation.

Speaking from the Pentagon briefing room podium, Esper said "we are not in one of those situations now."

"The option to use active duty forces in a law enforcement role should only be used as a matter of last resort, and only in the most urgent and dire of situations. We are not in one of those situations now. I do not support invoking the Insurrection Act," Esper told reporters.

Donald Trump's approach to tackling the unrest against police brutality and racism sparked by the death of George Floyd has received extensive criticism.

© REUTERS / Tom Brenner
U.S. President Donald Trump walks past a building defaced with graffiti by protestors in Lafayette Park across from the White House after walking to St John's Church for a photo opportunity during ongoing protests over racial inequality in the wake of the death of George Floyd while in Minneapolis police custody, outside the White House in Washington, U.S., June 1, 2020.

Defense officials were cited by CNN as suggesting there was growing unease among some in the Pentagon even prior to Trump announcing on Monday he was ready to deploy active duty forces if state officials fell short of ramping up enforcement efforts to deal with the unrest.

A number of lawmakers questioned the president’s response to protests after Monday night, when federal law enforcement used tear gas and batons to disperse a crowd of reportedly peaceful protests in Lafayette Square near the White House.

On the day, Trump announced from the Rose Garden he would invoke the Insurrection Act to deploy the US military to suppress civil disorder if state or city leaders refuse "to take the actions that are necessary to defend the life and property of their residents."

Outrage and protests were sparked in Minneapolis by the death of George Floyd, a black man who died on Memorial Day after he was pinned down by a white Minnesota police officer. The protests subsequently spilled over into other states in the country and across the world.

Second-degree murder, third-degree murder and manslaughter charges have been filed against white ex-officer Derek Chauvin, who prosecutors say held his knee on Floyd's neck for nearly nine minutes, resulting in his death.

Three other officers have been charged with aiding and abetting second-degree murder and manslaughter, with all four officers fired.