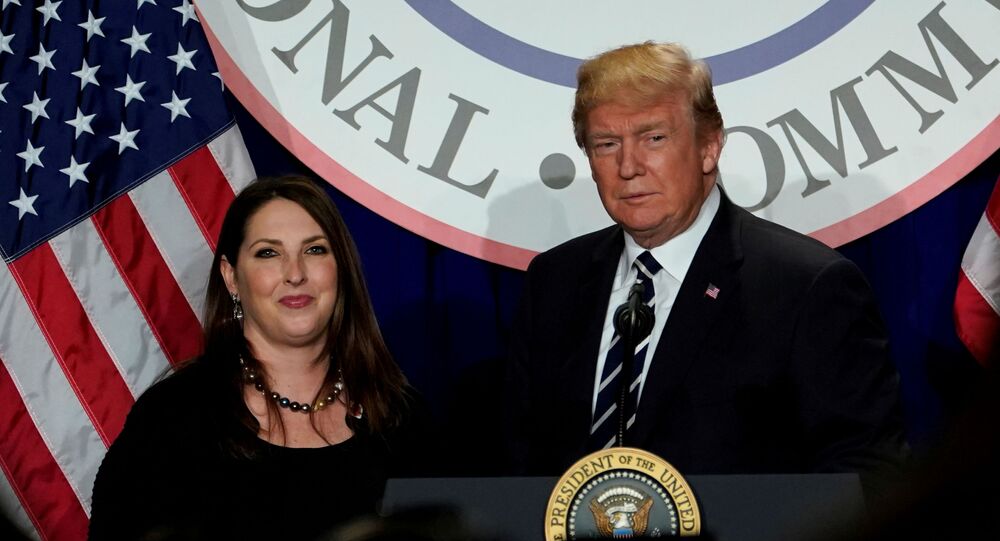 Number of Top Republicans Do Not Plan to Back Trump's Re-Election, Report Claims

The US presidential election is set to take place on 3 November 2020, as President Donald Trump will apparently confront the presumptive Democratic nominee, former Vice President Joe Biden. The latter had earlier formally clinched his presidential nomination, securing the necessary number of delegates.

An increasing number of "prominent" GOP officials are not going to support their fellow Republican and incumbent President Donald Trump in his re-election campaign, according to The New York Times. Moreover, some of them doubt they will back Trump in the upcoming elections, and are even weighing the possibility of voting for presumptive Democratic nominee Joe Biden.

The reported increasing dissatisfaction over Trump's leadership comes as a number of officials who have worked for both Presidents Bush and Reagan, many of whom signed a 2016 letter opposing POTUS, "were on Zoom chats and group emails", trying to determine how to express their position and whether they should endorse Biden, according to Kori Schake, a former National Security Council employee.

The concerns expressed by the GOP officials are reportedly caused by Trump's "incendiary response" to the ongoing protests against police brutality and "mishandling of the coronavirus pandemic".

Among the doubting GOP officials are former President George W. Bush and Senator Mitt Romney, who made it clear that they are not going to support Trump. Cindy McCain, the widow of Senator John McCain, is "almost certain" to back Biden, only refraining amid the possibility of one of her sons running for the office, as Jeb Bush "isn’t sure how he’ll vote". Also, former Speakers Paul D. Ryan and John A. Boehner have not disclosed their voting intentions, as "retired military leaders" are unsure about supporting Biden, while "voicing their unease about the president’s leadership". Florida Republican Representative Francis Rooney, who "hasn't voted for a Democrat in decades", is also considering supporting Biden.

The former VP is reportedly prepared to set up his "Republicans for Biden" coalition after he "fully consolidates" his own party, the NYT claimed, citing unnamed Democratic official sources. Earlier in the week, he formally clinched his presidential nomination, crossing the threshold of 1,991 required delegates and vowing in a statement to spend every day left before the election "fighting to earn the votes of Americans all across this great country". He also announced that the Democrats are entering the general election as "a united party".

Taking a shot at his potential opponent, Biden slammed Trump for his response to the ongoing protests over the murder of George Floyd, echoing recent accusations made by former Defence Secretary James Mattis that POTUS divides American citizens.

Trump's approach to tackling the unrest sparked by Floyd's homicide has received a lot of criticism, leading to him squabbling with local governors amid his intentions to use military force to restore order. In an attempt to quell the protests, the President deployed the National Guard in Washington, DC and warned that he might send the military to the regions where local authorities have refused to follow his recommendations to do the same.

Tensions rise as the date of the presidential election, 3 November, is approaching. The nominees from both parties and their picks for running mates are set to be officially announced at the National Conventions. The Democratic National Convention, scheduled for 17-20 August, will precede that of GOP, which is slated to be held on 24-27 August.