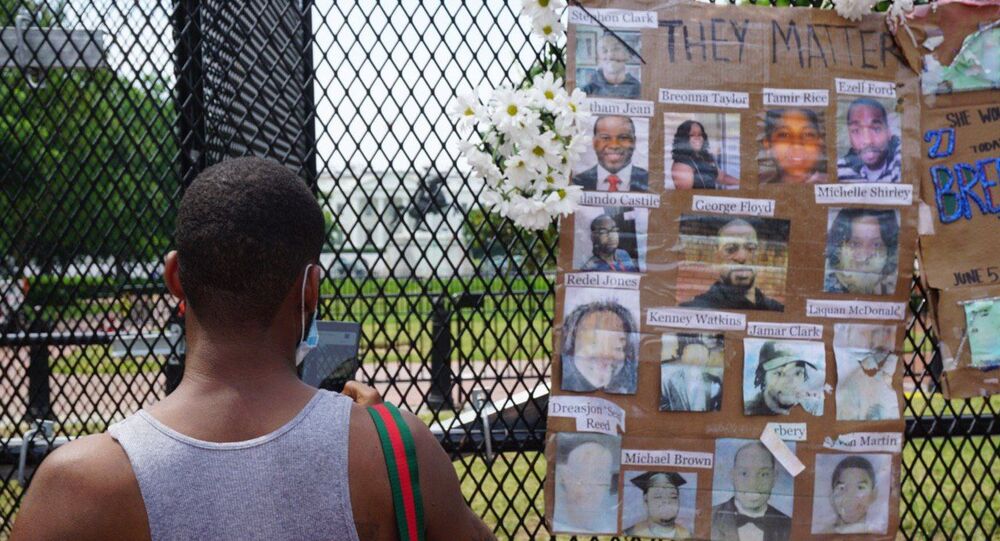 WASHINGTON (Sputnik) - Standing by a tall metal fence, which secures the White House surroundings, an African American woman displays a football uniform of her student son who died after a visit of police officers, having been 21 for 24 hours. Her personal vigil becomes a tiny part of a mighty, diverse, yet peaceful protest in Washington, DC.

Thousands of people of all ages, genders, and ethnicities took to the streets of America’s capital on Saturday, staging rallies near the Lincoln Memorial and the White House, marching past the Capitol and the State Department, converging and separating again, praying, dancing and singing, demanding an end to police brutality, justice and equality for all - in the name of George Floyd, an African-American, whose televised in-custody death sparked a nationwide campaign.

"There are a lot of us, mothers who lost our sons when the cameras were not rolling and it was not captured," Danielle Brown says. In October 2018, her son, Marquis Brown, jumped out of the window of his 16th floor dormitory room shortly after a visit of police officers who were responding to an emergency call. With no police wrongdoing found, the case was closed, but the bereaved mother cannot accept her son committed suicide.

"He mattered! He has been in the news! He mattered! Please, take responsibility for not keeping my son safe. He was 21 for 24 hours," she pleads. "I stand with George Floyd’s family, Ahmaud Arbery’s family, Brionna Taylor’s family, Eric Garner’s family, Trayvon Martin’s family. I stand with all these families, all these brothers and sisters out here who lost relatives when the film wasn’t rolling."

© Sputnik / Artur Gabdrahmanov
Danielle Brown, who lost her student son at the hand of police, stands by a tall metal fence, which secures the White House surroundings, as thousands of people staging rallies in the area over the death George Floyd. Washington, DC, US, 06.06.2020.

An elderly white couple say they felt an urge to become part of a growing movement and fight injustice. "I felt I need to get involved and really have to do something about injustice in the United States, make sure that everybody is equal. I am hoping as more and more people come out today to demonstrate, more and more of our politicians will get the idea and we will actually see change," a man in a Washington Nationals baseball team bandanna says.

Like most of the crowd, he has a vague idea about what exactly needs to be done to heal wounds. "I really don’t have the answer. I count on people smarter than me to be able to figure that out," the man says.

People participate in a rally against police brutality in front of the Lincoln Memorial in Washington DC on 6 June pic.twitter.com/VwKMpF0a5G

Braving a heatwave, crowds swell in Washington, DC on Saturday in what can be the biggest day of protests yet. The focal point is a newly founded Black Lives Matter Plaza - the 16th and H streets intersection, a few thousand feet away from the White House. The same motto - Black Lives Matter - is painted in giant yellow letters on the pavement.

Plaza signs instantly became a magnet for selfie enthusiasts and letters prove helpful when people need to find each other. "Will be waiting for you at letter "A" in the "Matter" world," a reporter was heard saying to his colleague.

© Sputnik / Artur Gabdrakhmanov
A man takes a selfie with the sign of the newly-renamed Black Lives Matter Plaza in Washington DC, US, 06.06.2020.

Police keep a low-profile. Officers, sometimes accompanied by National Guard soldiers, are present at the scene, but wear plain uniforms rather than riot gear and interact amiably with people. Security units were criticized for using excessive force earlier this week when protests turned violent in Washington, DC and were marred by looting and arson.

© Sputnik / Artur Gabdrakhmanov
US National Guard personnel stand by a service vehicle during a demonstration against police brutality in Washington DC, US, 06.06.2020.

A white man carries a placard with a crossed phrase "Berlin 1933" and is eager to explain the meaning. "That’s when Hitler came to power. If [US President Donald] Trump has his way, that’s what he would do, yes... I am here to make sure he does not get re-elected. We can’t stand another four years of this crap," the man says.

He explains that his protest is against "the establishment that produces this police brutality and allows it, and supports it and actually encourages it."

© Sputnik / Artur Gabdrahmanov
A protester holds a sign displaying the text "Berlin 1933" during demonstrations over police brutality taking place near the White House in Washington DC, US, 06.06.2020.

Volunteers, joined by some of Washington restaurants, hand out bottles of water, sandwiches, snacks, sunscreens, medical masks and sanitizers. Everything is free of charge. Volunteer medics are on guard throughout the area, some with improvised ambulance trucks.

A local church set up an air-conditioned "cooling room" with various supplies and socially distanced chairs, a welcome respite amid summer heat.

© Sputnik / Artur Gabdrakhmanov
People holding signs during a protest over police brutality in front of St John's Church near the White House, in Washington DC, US, 06.06.2020.

A speaker across the White House urges the African-American community to learn combat and quotes an action movie star Bruce Lee.

On 6 June, demonstrators gathered near the White House in Washington DC to protest police brutality triggered by the killing of George Floyd, an African-American unarmed man, by police pic.twitter.com/sBtiisDQ9c

"Bruce Lee said ‘I would rather be a warrior in the garden than a gardener at war.’ Our people need to be a prepared people for any battle that comes on our front," a young African-American man wearing glasses says. "I am not preaching violence, but I am preaching self-defense. If you don’t know how to take care of yourself, this is pointless."

A crowd greets loudly a group of medics in white coats coming out to join the protest. A doctor, who is carrying his daughter on his shoulders, admits that in times like these coronavirus mitigation measures cannot be fully observed. "We are wearing masks, as you can see. Practicing social distancing is impossible here, but sometimes it’s secondary to more important things," he says.

The current wave of mass protests in the US and other countries was sparked by the death of George Floyd, an African-American man, in police custody in the US state of Minnesota. Floyd died on 25 May after Derek Chauvin, a Minneapolis white police officer, pinned him to the ground with his knee for over eight minutes.

© Sputnik / Artur Gabdrakhmanov
A man sells t-shirts in front of St John's Church near the White House during a protest over police brutality, in Washington DC, US, 06.06.2020.