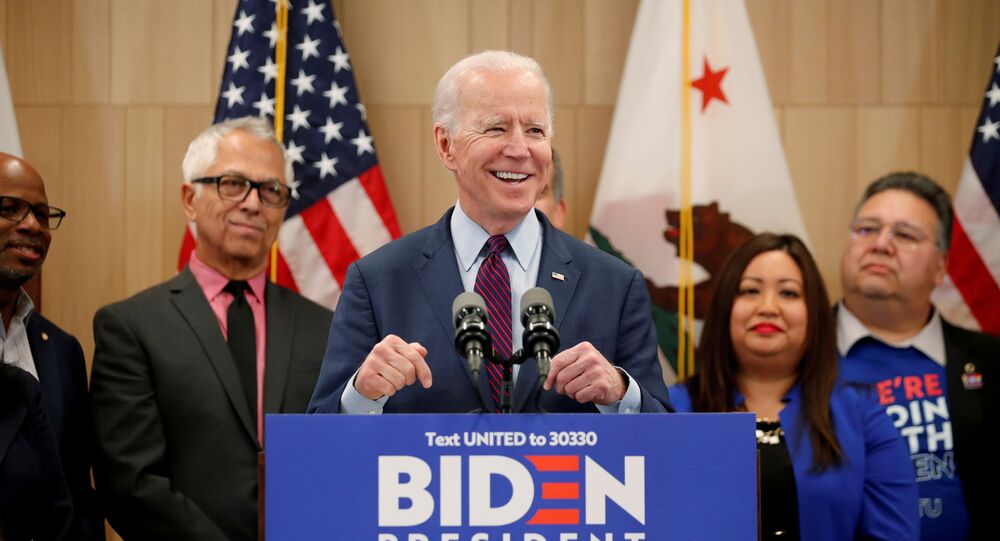 Former US Vice President Joe Biden had been assumed to be the presumptive Democratic candidate to face the incumbent US president, Donald Trump, in the 2020 presidential election, after all other Dem candidates withdrew from the race.

After Biden formally clinched the nomination, he released a statement announcing that the Democrats are entering the general election as a "united party". He went on to assure voters that he will spend every day before the election working to "earn the votes of Americans all across this great country".

"It was an honor to compete alongside one of the most talented groups of candidates the Democratic party has ever fielded — and I am proud to say that we are going into this general election a united party. I am going to spend every day between now and Nov. 3 fighting to earn the votes of Americans all across this great country so that, together, we can win the battle for the soul of this nation, and make sure that as we rebuild our economy, everyone comes along", Biden said in a statement.

Folks, tonight we secured the 1,991 delegates needed to win the Democratic nomination. I'm going to spend every day fighting to earn your vote so that, together, we can win the battle for the soul of this nation. https://t.co/sl3wFGabpg

Biden also encouraged every American "who feels knocked down" to join the campaign, saying that the movement his team is building is not only aimed at "defeating Donald Trump", but also at "transforming our nation".

​There are still eleven Democratic primaries to come, eight in the states of New York, Georgia, West Virginia, Kentucky, Delaware, New Jersey, Louisiana and Connecticut, and in three US territories - Puerto Rico, Guam and Virgin Islands.

Biden has performed well in recent polling, gaining an advantage over Trump in 13 key swing states - a better result than that of former Democratic candidate Hillary Clinton in 2016.

​A poll by ABC News/Washington Post published in late May showed that Biden led Trump 53 percent to 43 percent among registered voters. The results were interpreted as an improvement on a 2-point lead Biden showed against Trump in March.

The same poll found that 50 percent saw Trump as a strong leader and 43 percent said the same of Biden. Even with the national economy reeling from the impact of the coronavirus pandemic lockdowns, Trump's way of handling the economy was viewed positively by 52 percent of respondents.