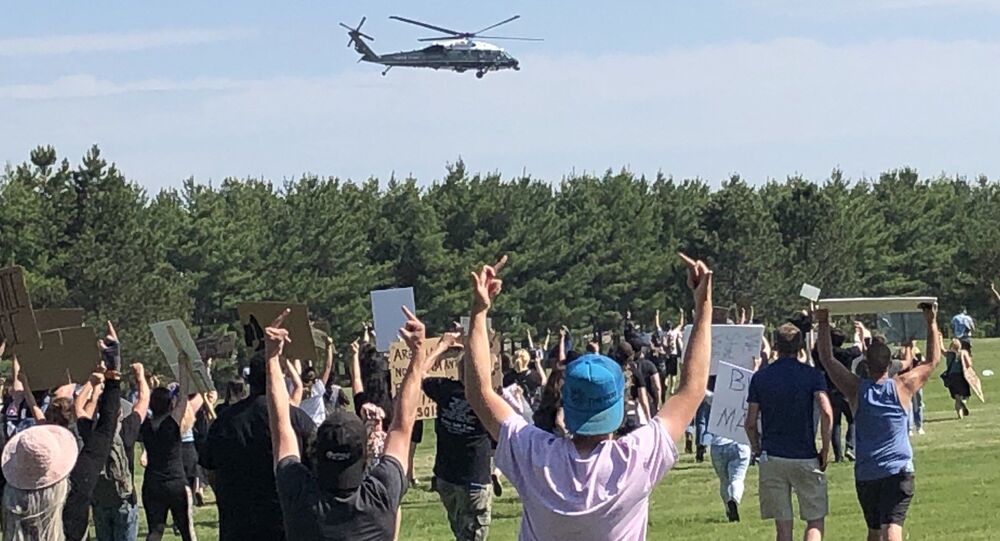 Protesters honoring the memory of George Floyd and organizing against police brutality greeted US President Donald with the one-finger salute as he arrived in Maine on Friday.

Trump arrived in Bangor, Maine, on Friday and was greeted by former Republican Maine Governor Paul LePage. Democrat Janet Mills is the current governor of the state.

Footage and images posted to social media on June 5 showed the US president received an additional message from protesters as he traveled through the state via Marine One.

Protesters give Marine One the middle finger as Trump leaves for Guilford. pic.twitter.com/bgS4Zwr5MY

Additional footage of protests within the state showed similar opposition to the US president’s visit.

Peaceful protestors chant “black lives matter” and MAGA moron shouts back “so does mine” in tense exchange ahead of Trump speech in rural Guilford, Maine pic.twitter.com/EoUD5nqa44

The crowd of protesters has grown to about 35. Many here are in support of the Black Lives Matter movement, others just don’t want to see Trump in Maine. @newscentermaine pic.twitter.com/LRl50cgEWu

While the US is currently experiencing a surge of race-related protests demanding equality, Trump decided to descend on Maine’s most conservative county to tour Puritan Medical Products, which is assisting in the production of medical swabs for COVID-19 test kits.

Prior to his tour, the US president touched down in Bangor and held a roundtable discussion in support of commercial fishermen.

During the event, Trump signed a proclamation that reopened the Northeast Canyons and Seamounts - a marine national monument - for commercial fishing, according to local outlet WMTW.

Trump appeared to be delivering a nonverbal message as he raised his fist at the Bangor International Airport.

NPR reported that Senator Susan Collins (R-ME), Maine’s only Republican member of Congress, will not be joining the US president as he tours the medical swab-producing factory on Friday.

Earlier this week, the senator spoke out against the president and US Attorney General William Barr’s decision to have peaceful protesters removed from Lafayette Square in Washington, DC, with tear gas and other chemical irritants.

"It was painful to watch peaceful protesters be subjected to tear gas in order for the president to go across the street to a church I believe he's attended only once," she said in a response that caught the attention of the US president later that day.