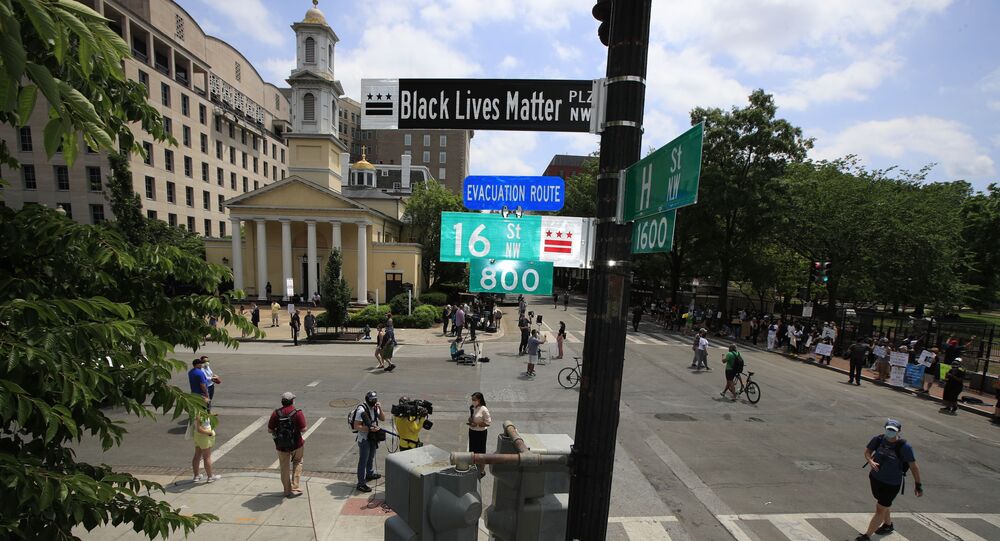 Local muralists and Democratic Washington, DC, Mayor Muriel Bowser are delivering a message to the nation and the White House through the incorporation of “Black Lives Matter” into a city-based art project and the renaming of a street.

In a Friday social media post, the mayor issued a message to the late Breonna Taylor, a black woman who was killed in her own home by Louisville Metro Police Department (LMPD) officers during a botched raid on March 13. Friday would have been Taylor’s 27th birthday.

Breonna Taylor, on your birthday, let us stand with determination.

Determination to make America the land it ought to be. pic.twitter.com/XOfu6CGEGY

The placement of the lettering is just two blocks north of Lafayette Square, the site of Monday gassings and assaults carried out by authorities.

The American Civil Liberties Union and other civil rights organizations have since filed a lawsuit against US President Donald Trump and US Attorney General William Barr, who ordered authorities to clear Lafayette Square ahead of the president’s photo-op at St. John’s Episcopal Church.

The mayor also unveiled the “Black Lives Matter Plz NW” sign that is now fixed at the corner of 16th Street and H Street NW in the city.

"We want to call attention today to making sure our nation is more fair and more just and that black lives and that black humanity matter in our nation," Bowser said, as reported by NBC Washington.

Responding to the mayor’s words and actions on Friday, the local Black Lives Matter chapter argued that this push is “a performative distraction from real policy changes.”

“This is to appease white liberals while ignoring our demands. Black Lives Matter means defund the police,” argued the group Friday morning.

A Secret Service official told The Hill on Thursday that the White House complex, which includes Lafayette Square, will remain closed to the public until June 10.

"These closures are in an effort to maintain the necessary security measures surrounding the White House complex, while also allowing for peaceful demonstration," the agent claimed.