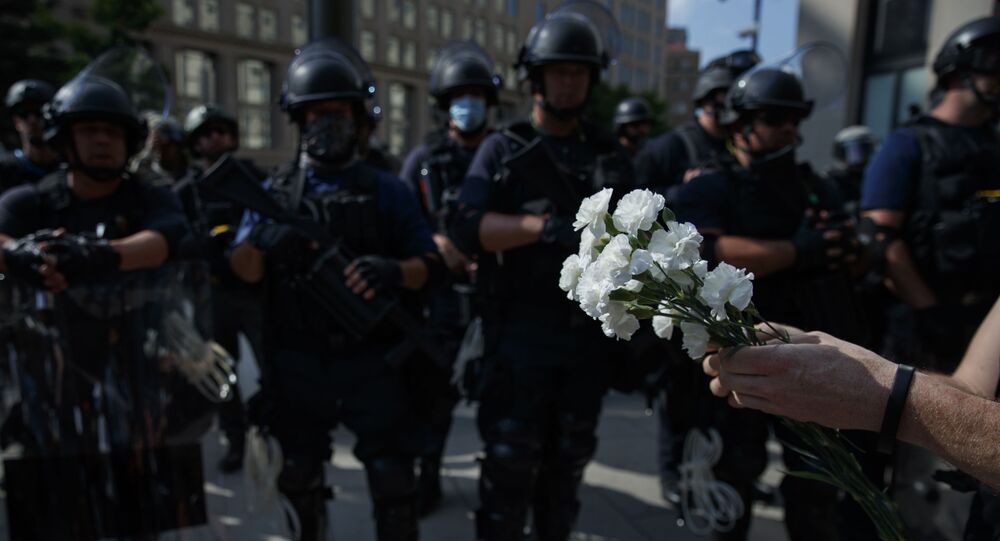 Washington, DC has been flooded with thousands of law enforcement agents, who are policing the city in the wake of the sometimes-violent protests over the death of George Floyd in police custody.

The presence of federal agents without identifiable insignia in DC has caused frustration among George Floyd protesters and a legislative pushback.

DC residents and reporters have been posting photos of armed men without badges or name plates standing guard in the city, which turned into one of the hotspots of protests over the past week.

According to reporter Dan Friedman, the men in riot gear would not reveal their affiliation, saying that they are working with “the Department of Justice”.

Asked who they’re with, these guys say only that they’re with “The Department of Justice.” pic.twitter.com/ciVDtP8ndk

5PM WHITE HOUSE — These are the unidentified DOJ officers holding the perimeter at 15th and H Streets.
They won’t tell the public to whom they report exactly...
It’s generating HUGE frustration here #GeorgeFloyd @WUSA9 pic.twitter.com/GOSbeyplLb

​The absence of identifiable markings led to concerns among protesters and the media that these troops may not be held accountable in case of misconduct, or that they may include members of militias.

Deploying armed men, lacking identification, from multiple agencies and with a confused chain of command seems like an open invitation to any right wing vigilante or militia to set up shop on a #DC street corner. https://t.co/DwGPsWQJYN

​The District of Columbia's code specifically requires that uniformed officers assigned to police “are equipped with the enhanced identification and may be identified even if wearing riot gear”.

Completely unmarked officers in riot gear holding protesters blocks away from the White House. No badges. No insignias. No name tags. Nothing. Refused to tell us who they’re with. #DCprotest #DCprotests pic.twitter.com/c4lFFCsX48

​Some Washingtonians said the troops created a feeling of the city being under “some sort of military occupation”.

For those of you who don't live in DC, we are not under siege by rioters here. The protests have been peaceful. We are under some sort of military occupation because this is the only place in the country Trump can bring out the military without running into major legal problems.

​The deployment of unmarked troops has also irked Democrats, who on Thursday introduced a Senate bill that would require law enforcement officers and members of the military to identify themselves and their agency when they are engaged in crowd control or arrest protesters.

"The practice of officers operating with full anonymity undermines accountability, ignites government distrust and suspicion, and is counter to the principle of procedural justice and legitimacy during this precarious moment in our nation's history,” House Speaker Nancy Pelosi wrote on Thursday in a letter to President Donald Trump, urging him to reveal what agencies are involved in policing DC and clarify their roles and responsibilities.

How many federal troops are there in DC?

The number hasn’t been made public, although Bloomberg reports, citing an unclassified military memo, that there are around 6,000 federal law enforcement agents and National Guard troops operating in the DC area.

An additional 1,700 active-duty troops are said to be stationed just outside the city under a contingency plan.

What agencies have contributed teams?

Justice Department spokeswoman Kerri Kupec said on Monday that the department had deployed to DC all of its law enforcement elements, including the FBI, the Bureau of Alcohol, Tobacco, Firearms and Explosives, the Drug Enforcement Administration; the US Marshals, and the Bureau of Prisons.

The Bureau of Prisons confirmed that it had sent in some of unbadged officers, explaining that they were not wearing specific clothing because they were serving “a broader mission”.

An unnamed US official told CBS News that forces from federal agencies were brought to the DC area “in a hurry”, and some do not have traditional insignia but would identify themselves if they detain individuals.

Attorney General William Barr, who is leading the federal response to the protests, told reporters on Thursday that many federal agents don’t typically wear badges with their names and that many of them aren’t used to responding to civil unrest.

“In the Department of Justice we do not really have large numbers of units that are trained to deal with civil disturbances,” he said. “I could understand why some of these individuals simply wouldn’t want to talk to people about who they are, if that in fact was the case.”

It is unclear for how long the federal troops will be in Washington. Although Barr indicated on Thursday that he could reduce some security checkpoints in the city and “take a little bit of a more low-profile footprint” after a reduction in violent episodes, clashes between protesters and riot police will likely continue as thousands of demonstrators are expected to take part in rallies over the weekend.