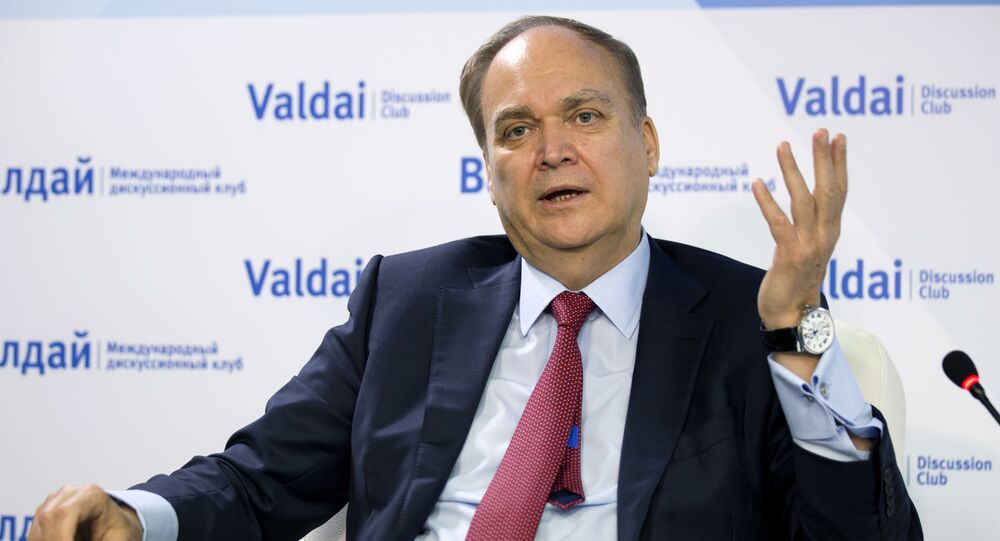 WASHINGTON (Sputnik) - A joint coordinated effort is now required to save the Open Skies Treaty (OST), Russian Ambassador to the United States Anatoly Antonov said in an op-ed on Thursday.

“The current situation requires that we all seriously reflect on the consequences of the looming US exit from OST,” Antonov wrote in a piece published in The National Interest on Thursday. “We need joint coordinated efforts to save the agreement that is essential for everyone. Any legally binding treaty is a delicate balance of its member countries’ interests, rights, and obligations.”

Antonov pointed out that no matter what the real reason may be for Washington to exit the Open Skies Treaty, all parties to the agreement and international security as a whole will lose.

“Washington’s European allies are fully aware of the increased risks to stability on the continent and most of them criticize White House’s intention,” he said. “We share their concern. Despite the fact that Russia - similar to the United States - has advanced national technical means... we value the Open Skies, first of all, for its unique role as an instrument of confidence-building and promoting dialogue. In today’s volatile global situation the international community cannot afford to squander agreements like the Open Skies Treaty.”

US Secretary of State Mike Pompeo announced on 21 May that Washington would pull out of the 2002 treaty in six months unless Russia started adhering to the pact, which allows reconnaissance flights over some 34 participating countries. Russia has denied breaching its terms.

“We have repeatedly shown with concrete figures that the claims that Russia is not fully implementing the agreement are baseless,” Antonov said. “At the same time, despite the absurdity of most accusations, we have always shown an openness to discussing issues that concern Washington, DC. There is the Open Skies Consultative Commission - mechanism established under the OST specifically for these purposes.”

Antonov pointed out that Russia also has some complaints about the US’ non-compliance with the treaty’s provisions.

“In particular, they are related to securing the safety of cabin crews during flights over the US territory, imposing restrictions on the maximum distance of observation flights over the Hawaiian and Aleutian Islands as well as on flight altitude for observation aircraft,” he explained. “The difference is that we are ready - and we have repeatedly demonstrated it - to find mutually acceptable solutions to technical problems at the negotiating table. In contrast, Washington seems to deem it more important to get rid of an agreement that appears to believe is binding the United States’ hands and feet.”

To show the baseless of the accusations , Antonov gave an example - noting that Washington claims that Russia does not allow American aircraft to fly over Kaliningrad. Antonov said this is only partially true as it is not prohibited, but there are certain limitations.

“I would like to point out that around 90 percent of the Kaliningrad region can be observed during a flight by a state party wishing to have a look at this area,” he explained. “At the same time, the United States does not allow Russian aircraft to fly over Alaska. As compared to the United States, our aircraft are able to capture only 3 percent of the Alaskan territory. So, where is the truth? Where is the balance of interests here?”

The Ambassador continued to say that the Open Skies Treaty has proved to be an effective mechanism for confidence-building and cooperation.

“One can make sure that no aggression is planned and no dangerous military activities are taking place,” he stated. “Thus, this agreement helps keep military activities transparent (first of all of the NATO countries and Russia), promotes de-escalation of tension, and prevents misinterpretation of each sides’ intentions.”

Antonov went on to say that Russia considers the treaty still relevant and also considers this channel of professional exchange of views important.

“The exceptional value of the OST is also determined by the fact that it is one of the last legally binding agreements between nuclear superpowers promoting mutual understanding and transparency amidst a deep crisis in arms control,” he added.

The Russian Foreign Ministry said that Moscow would work with the United States only on a mutual basis and would not accept any ultimatums.

US Officially Notifies Russia of Its Withdrawal From Open Skies Treaty