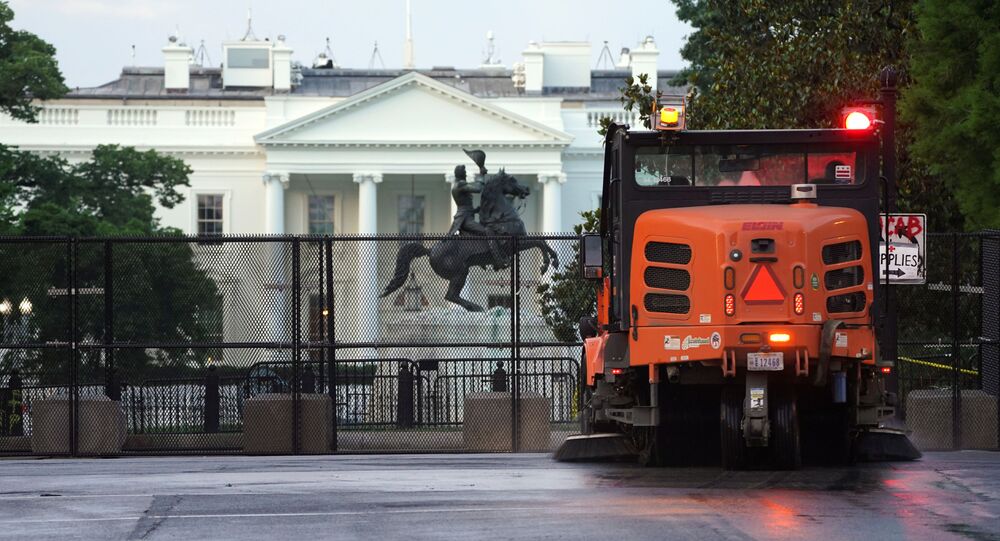 Tall, metal fencing, along with concrete barriers, appeared along 17th Street in the US capital and around the White House and EEOB on Thursday.

In addition to the new fencing, which now extends past the EEOB down 17th Street, @abdallahCNN reports that additional concrete barriers have been installed behind existing fencing at 17th and Pennsylvania Ave. NW pic.twitter.com/aoULVLNFF8

He also claimed that the other fencing has likely been erected because the White House “has been a target of protest activity and tangential agitators.”

The fortification comes alongside Metropolitan Police Department (MPD) Chief Peter Newsham’s Thursday report that no arrests were made the day prior in connection with the peaceful demonstrations in the city.

“There was no damage to MPD property. There was no MPD injuries. Moving forward over the next couple of days, we expect more of the same,” he said on Thursday, as reported by The Hill.

Bowser slammed the federal government’s decision during a Thursday news conference, noting that the White House is “the people’s house.”

"I think that’s a sad commentary,” she added. “We should want the White House opened up for people to be able to access it from all sides."

In addition to DC leadership chiding the White House’s decision, netizens voiced their own disagreement via social media. Hashtags such as “#BunkerBoy” accompanied some posts.

Imagine being so cowardly and incompetent that you need to build layers of walls - essentially a moat - around our White House to distance yourself from the American people who are suffering, dying and starving from a pandemic, and who are crying out for social justice.

There is a tall new fence at Trump’s White House this morning.

He finally built the wall. pic.twitter.com/n35uIQz9a1

Aggrieved parasite, #BunkerBoy is finally gettin’ his wittle wall. Did México pay for it? I sure hope so. 👶🏻 🍊 😭 pic.twitter.com/LTsqaoWUnx

A fitting image to mark the end of this presidency. A vain, confused, furious man alone in a bunker, under a darkened White House, surrounded—at last—by his fence and his wall. pic.twitter.com/52d2UW9UMr

While there is no scheduled curfew for the city on Thursday, there remains a substantial police and active-duty troop presence in the US capital. Other authorities whose affiliations are not always clear have also appeared within Washington, DC, prompting House Speaker Nancy Pelosi (D-CA) to issue a request to US President Donald Trump seeking clarification of the agencies involved in policing protests.