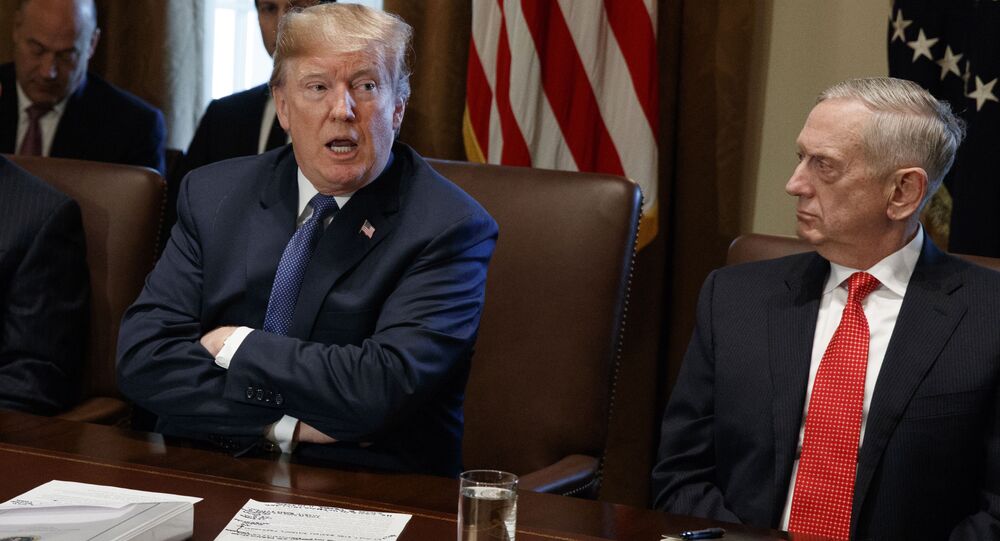 The former secretary of defence slammed Donald Trump on Wednesday, accusing him of threatening the US constitution, and suggesting that he was the "first president in [his] lifetime" deliberately working to divide Americans instead of trying to unite them amid the ongoing rage and protests over the killing of George Floyd.

General James Mattis is out of touch with what's really going in American cities, or deliberately ignoring the violence and lawlessness taking place there in recent days, White House spokesman Hogan Gidley has suggested.

"It's obvious that the general doesn't have a clue what's going on in the American cities out there, or he's, actually worse, turned a blind eye to it," Gidley said, speaking to reporters on Thursday.

The spokesman's remarks come in the wake of blistering comments by Mattis in The Atlantic on Wednesday in which he accused the president of "not even pretend[ing] to try" to unite the American people over his time in office, and suggested that the divisions seen today are "the consequences of three years without mature leadership" in the White House.

"When I joined the military, some 50 years ago, I swore an oath to support and defend the Constitution. Never did I dream that troops taking the same oath would be ordered under any circumstance to violate the Constitutional rights of their fellow citizens - much less to provide a bizarre photo op for the elected commander-in-chief, with military leadership standing alongside," Mattis added, referring to the violent dispersal of protesters in Washington DC for the sake of a Trump photo op in front of St. John's Episcopal Church, the 200+ year old Washington landmark which had been vandalized and set on fire by rioters.

Trump shot back at Mattis in a series of tweets, suggesting that "probably the only thing Barack Obama and I have in common is that we both had the honor of firing Jim Mattis, the world's most overrated General." Accusing the Pentagon chief of failing in the tasks he'd given him, Trump added that he was "glad" he was no longer working in his administration. Mattis left his post at the Pentagon in January 2019, after Trump announced plans to withdraw US troops from Syria.

'All Options on the Table' Regarding Military Deployment

In his comments Thursday, Gidley warned that when it comes to using the military to quell riots across US cities, 'all options' were fair game far as President Trump is concerned.

"The American people's safety and security is the number one thing Donald Trump cares about. Period. All options are on the table," the spokesman said when asked about the possible use of active duty troops in Washington, DC specifically.

"It's the president's decision alone whether or not to invoke the Insurrection Act. He was elected," Gidley added, when asked about Secretary of Defence Mark Esper's opposition to deploying active duty troops to handle riots.

Under the Insurrection Act of 1807, the president has the authority to deploy US military and National Guard troops to suppress civil disorder, insurrection or rebellion.

Cities across the US have been hit with widespread unrest, ranging from peaceful protests to rioting, looting and large-scale arson over a white Minneapolis police officer's killing of George Floyd, a 46-year-old black man who died after being choked by the officer for eight minutes, on May 25. The protests began in Minneapolis on May 26, but quickly spread to other major US cities and abroad as activists slammed police brutality and systemic racism. However, in addition to the peaceful demonstrations, the civil disobedience also degenerated in some areas into acts of mass violence and property damage, with at least 16 people killed and thousands more arrested in confrontations between police and protesters.