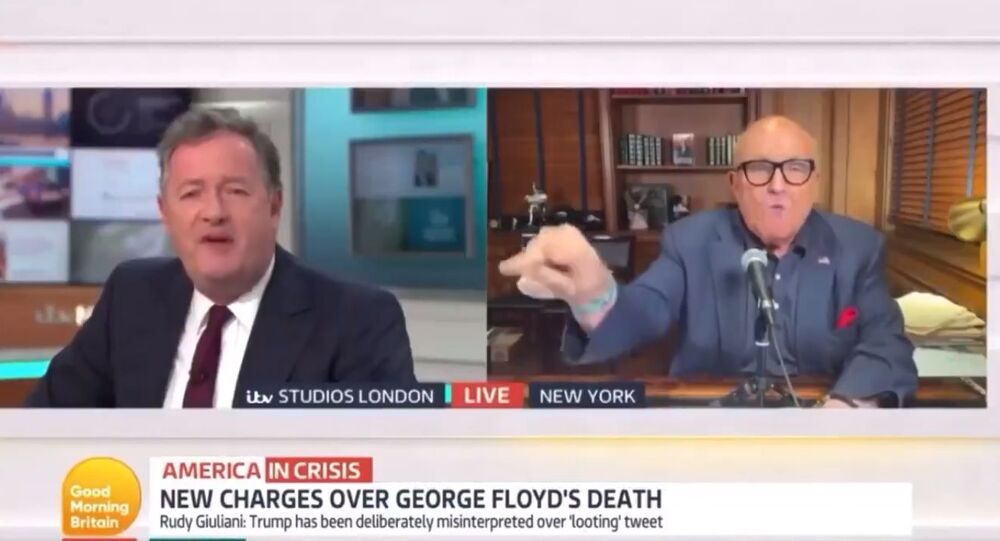 The bromance between ITV presenter Piers Morgan and Donald Trump may be really over now, following the journalist’s harsh remarks towards the president’s suggestions of how to treat coronavirus and now a TV battle with his personal attorney Rudy Giuliani.

The two clashed over Donald Trump’s tweet last week, where the US president slammed “thugs” who were inciting violence and instigating damages across the United States following the death of African-American George Floyd in police custody on 25 May. The president tweeted in relation to the unrest that “when the looting starts, the shooting starts”- the post that was condemned by many and flagged by Twitter for “glorifying violence”.

Piers, who was previously unfollowed by Trump on the same social media platform amid the journalist’s slamming remarks over the president’s coronavirus comments, strongly criticised the tweet. But Giuliani rushed to defend the president, who he said did not “have a racist bone in his body”. The show’s host still remained unimpressed, with the debate clearly getting out of hand.

“You sound completely barking mad. Do you know that? You’ve lost a plot,” Piers told his interviewee.

“No I don’t. You sound like a big liar”, Trump’s lawyer responded.

.@piersmorgan and @RudyGiuliani get involved in a heated argument...

Watch GMB weekdays from 6am on ITV and The ITV Hub 👉 https://t.co/yyUUJmzswF pic.twitter.com/x6C4d5xrfI

The two then started reminding each other of their alleged career failures, as Piers referred to his guest as a “rude”, “mad” and “unhinged”.

“When I used to interview you, you were an intelligent, reasonable man. And you’ve gone completely mad and you sound deranged. It’s really sad to see what’s happened to you”, the Good Morning Britain presented claimed.

Any attempts by Reid to weigh in on the battle and stop the flow of mutual accusations were doomed to failure.

“This feels like it’s turned into a personal argument between you two and I’m not sure that our viewers want to watch that”, Reid pronounced, but the clash still went on for some time.

© REUTERS / Tom Brenner
Donald Trump Reveals Why He Was in Underground Bunker as Protests Sweep Across the US
Donald Trump’s tweet was related to the ongoing protests across the United States that started with the death of George Floyd, a 46-year-old black citizens of Minneapolis, who died in police custody on 25 May, after a white police officer, Derek Chauvin, kneeled on his neck for more than eight minutes. Floyd was pronounced dead in a hospital shortly afterwards, with the incident exacerbating long-existing grievances over the brutality and racial prejudice of American law enforcement and leading to major national unrest.
...
Reddit
Google+
Blogger
Pinterest
StumbleUpon
Telegram
WhatsApp
20
Tags:
Twitter, Donald Trump, George Floyd, Good Morning Britain, Piers Morgan, Rudy Giuliani, Great Britain, United States
Community standardsDiscussion