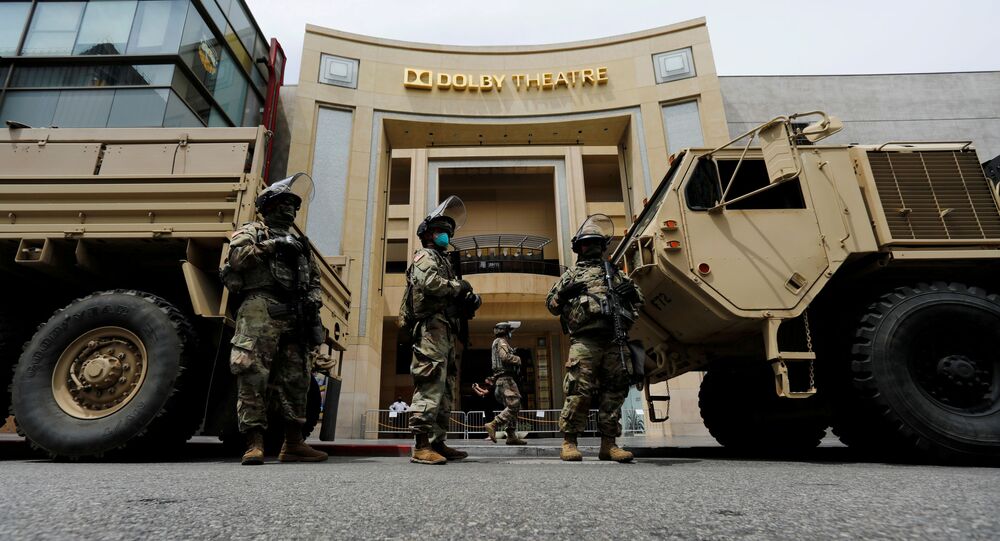 Arkansas Republican Senator Tom Cotton is continuing to beat the drums of military occupation, penning an op-ed in the New York Times on Wednesday saying US President Donald Trump should “send in the troops” as mass protests against police brutality enter their ninth day.

Across the United States, state governors have brought up an almost unprecedented amount of soldiers to quell the continued unrest, which has included rioting and looting, as well as peaceful marches and demonstrations. Despite this, Cotton has taken up the call for deploying active-duty military service members on US soil, terming the protesters “insurrectionists.”

“Send in the troops. The nation must restore order,” Cotton wrote in the NYT opinion piece. “The military stands ready.”

Cotton makes his argument by noting widespread looting in Midtown Manhattan and other locations on recent nights, the deaths and injuring of several police officers associated with the rioting and the personal objection of Terrence Floyd - brother to slain 46-year-old black man George Floyd, whose death sparked the protests - to “blowing up stuff.”

Macy’s at 34th. Street, long the largest single department store anywhere in the world, & a point of pride in NYC, was devastated yesterday when hoodlums and thieves vandalized it, breaking almost all of its large panels of storefront glass. What a shame. Bring in National Guard!

​“One thing above all else will restore order to our streets: an overwhelming show of force to disperse, detain and ultimately deter lawbreakers,” Cotton writes. “But local law enforcement in some cities desperately needs backup, while delusional politicians in other cities refuse to do what’s necessary to uphold the rule of law.”

No doubt such force is already on display, as 3,600 troops occupy Washington, DC, and 67,000 have been activated nationwide, nearly equaling the largest domestic mobilization of guardsmen during the 1968 King riots that followed the assassination of black civil rights leader Dr. Martin Luther King Jr.

Nonetheless, Cotton defends the Insurrection Act, the invocation of which would authorize the deployments, as a “venerable law, nearly as old as the republic itself,” which he insists means that it isn’t “martial law” or a violation of the Posse Comitatus Act, a post-Civil War law that prohibits the military from serving in a law enforcement role, as it did in the defeated rebel states of the South during Reconstruction.

Earlier this week, the Arkansas senator made his case on Twitter and on Fox News for having protesters “fac[e] off with the 101st Airborne Division,” or “whatever it takes to restore order. No quarter for insurrectionists, anarchists, rioters, and looters.”

Since the start of the year, the New York Times has published two absolutely deranged opinion pieces by US Senator Tom Cotton, perhaps the most unhinged neoconservative warmonger in all of Congress.

The so-called "paper of record" always provides a platform for war propaganda. pic.twitter.com/SyzYIkDiCy

​As Sputnik reported, the freshman senator and former Iraq War veteran has acquired the nickname “the Trump whisperer,” since the president often consults Cotton on matters, as he did in the lead-up to the US withdrawal from the Iran nuclear deal in 2018. And indeed, just hours after Cotton made his impassioned plea for military repression, Trump announced he was willing to invoke the Insurrection Act to dispatch US troops to any state that refuses to activate its own National Guard to crush the protests.

The protests themselves began last Monday after George Floyd died in the custody of Minneapolis Police Department officers, one of whom, Derek Chauvin, pressed his knee on Floyd’s neck for nine minutes after he and three other officers tackled Floyd to the ground. Invoking the Black Lives Matter movement against the killings of black people by white people, but especially by police officers, the protests quickly grew until they overcame the Minneapolis police, whose third precinct was torched by the angry protesters along with several stores.

While protests in other cities soon popped up and invoked the names of other recently slain black persons, what arguably drove them into the colossal nationwide demonstrations was the highly publicized, wanton police violence against protesters, including numerous instances of brutality against peaceful demonstrators, passers-by and even the media, as well as the callous response to the issue by national leaders, including Trump.

A majority (57%) of the public now says police are more likely to use excessive force with a black person than a white person in similar situations, according to a new @MonmouthPoll . Only one-third of the country held this opinion four years ago. https://t.co/ecI9H1VZVG

​The protests have also revived a nationwide conversation on racial inequality that the foundation of the Black Lives Matter movement in 2013 has helped propel. Recent polls from Monmouth, Reuters/Ipsos and CBS/YouGov have all shown a majority of Americans believe US police officers disproportionately and unfairly target black Americans and are more likely to use excessive force against them.

On Wednesday afternoon, the Minnesota attorney general increased the severity of the charges against Chauvin to second-degree murder and pressed charges for the first time against the three other officers involved.

'We Can Unite Without Him': Former Defense Secretary Slams Trump as Threat to US Constitution