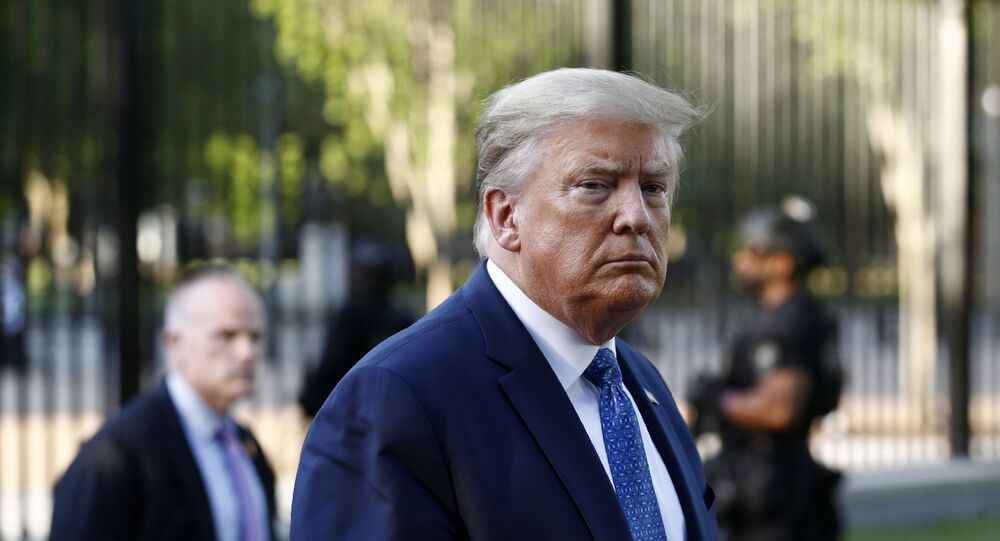 Earlier on Wednesday, President Donald Trump urged police to get "tough" on rioters in a call that comes amid ongoing protests in major cities across the US following the death of African-American man George Floyd at the hands of a white police officer in Minneapolis on 25 May.

The Washington Post (WaPo) has cited current and former CIA officials as saying that they are concerned over parallels between the ongoing George Floyd protests and “the signs of decline or democratic regression they were trained to detect in other nations”.

WaPo’s Greg Miller specifically referred to ex-CIA analyst Gail Helt, who said that she “had seen this kind of violence” in China and Southeast Asian countries in previous years.

“This is what autocrats do. This is what happens in countries before a collapse. It really does unnerve me”, she pointed out.

The same tone was struck by former CIA official Marc Polymeropoulos, who was perplexed by recent images of US President Donald Trump holding up a Bible in front of St. John’s Episcopal Church in Washington as the police fired rubber bullets and tear gas to disperse protesters in the area.

“It reminded me of what I reported on for years in the third world. Saddam [Hussein]. Bashar [Assad]. [Muammar] Gaddafi. They all did this”, Polymeropoulos tweeted, referring to the former leaders of Iraq and Libya, as well as Syria's incumbent president.

The president standing bizarrely alone and holding a Bible - after police on live tv attacked peaceful protesters to support this photo op - was indeed an iconic image. It reminded me of what I reported on for years in the third world. Saddam. Bashar. Qaddafi. They all did this. https://t.co/0atnfoE8EB

Referring to POTUS, Miller, for his part, asserted that “even away from the cameras, Trump has assiduously cultivated the aura of a strongman” who does not think twice before slamming US governors as “weak” for failing to duly retaliate against protesters.

In this vein, Miller cited former top US envoy to the Middle East Brett McGurk as saying that the imagery of Trump recently calling for dominating the streets may well “define America for some time”.

The remarks come as the US president called on police Wednesday to get "tough" on the rioters as he responded to a tweet by a former CIA analyst who condemned the protesters, who hurled Molotov cocktails at law enforcement officers.

Trump also reacted to another tweet by the same analyst about a looting spree on New York City's 5th Avenue, which reportedly remained unhindered by the police, tweeting that “the National Guard is ready”.

He previously threatened to deploy the US military in cities that refused to call in the National Guard and failed to contain the riots, which have been underway since black American man George Floyd died at the hands of Minneapolis police on 25 May.