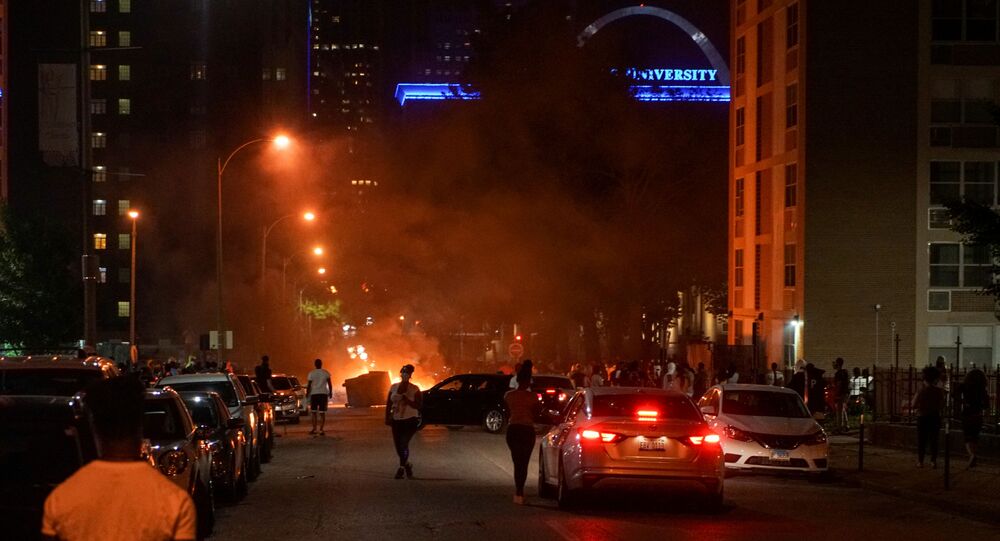 Previously, an American media outlet cited several current and former Pentagon officials as being "concerned" over Esper's purported agreement with Trump's plans to deploy the military to stop the violent protests in the country.

White House Press Secretary Kayleigh McEnany has confirmed that US President Donald Trump is ready to invoke the Insurrection Act, which would allow him to deploy troops domestically in case of major disturbances or unrest. Her statement comes amid media reports that Trump had walked back his plans in the face of criticism and the alleged reduction in the number of violent protests in US cities this week.

McEnany also commented on the controversial brutal dispersal of protesters from Lafayette Park earlier this week, arguing that the use of force was not excessive.

"The US parks services when having bricks thrown at them and frozen water bottles had the right to act. They acted with the appropriate level of force to protect themselves and to protect the average citizenry and to protect the peaceful protesters who were among them as well", the spokeswoman said.

Addressing rumours that US President Donald Trump might sack Secretary of Defence Mark Esper over his comments about the potential use of active duty servicemen to quell unrest in the country, White House Press Secretary Kayleigh McEnany assured that Esper is still holding his post. She also added that should this change in the future, the White House will undoubtedly announce it.

US Secretary of Defence Mark Esper earlier stated that he doesn't support President Donald Trump's idea of using the Insurrection Act in order to deploy military forces in American cities to quell the ongoing violent riots, which were originally sparked by the death of African-American man George Floyd. He opined that active duty troops should be used only as a last resort, when nothing else can help. The Pentagon chief added that the US is currently not in such a desperate situation.

"I've always believed and continue to believe that the National Guard is best-suited for performing domestic support to civil authorities in these situations", Esper said.

Esper also commented on a media report which said that he had referred to the riot-engulfed US cities as a "battlespace", admitting that he had used the phrase in conversation with President Donald Trump. The Pentagon chief explained that the term was used as military lexicon and added that had he had a chance to use another phrase, he would have done so.

The secretary of defence elaborated on another recent political scandal in the US, namely his walk alongside the president to St. John's Episcopal Church, which was preceded by a violent dispersal of peaceful protesters from the nearby square. He explained that he knew about the walk in advance, but thought it was meant to observe the damage done to Lafayette Park's facilities by the rioters. Esper went on to say that it's hard to keep the military out of politics in the run-up to a presidential election.

Both the walk and Esper's purported acceptance of Trump's plans to deploy the military in cities that fail to quell the unrest drew a lot of criticism from the media and US politicians alike. In addition to this, a report by Politico suggests that many current and former Pentagon officials were also "concerned" by the prospects of sending in the military to disperse the crowd.

The ongoing protests erupted last week after an incident in the city of Minneapolis, where an unarmed African-American man named George Floyd was killed during his arrest by local police. The man suffocated after being pinned down to the ground by one of the officers, who placed his knees on his neck and back, keeping them in place for nearly eight minutes as Floyd pleaded for air.