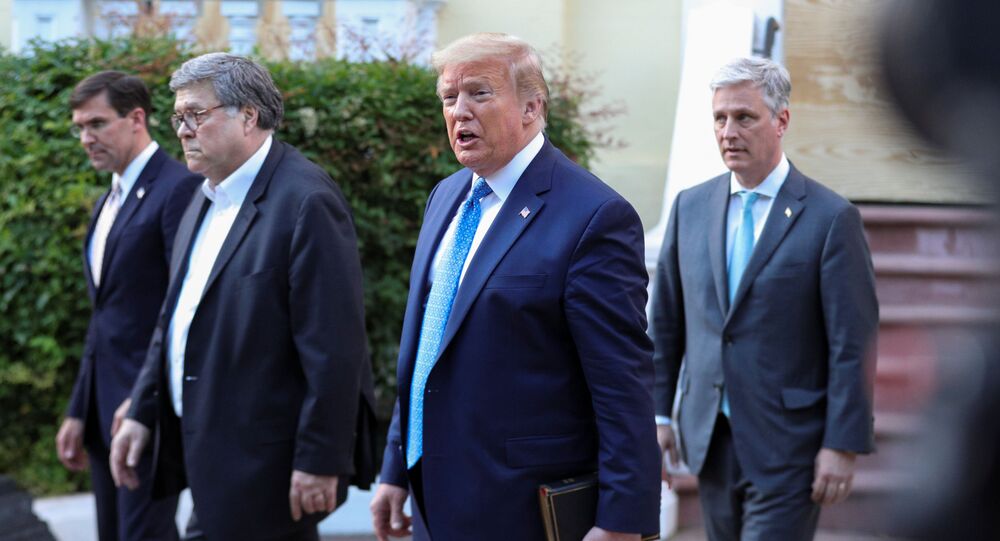 The Republican National Convention, set to take place on 24-27 August, is the event in which the delegates of the GOP select the party's nominees for president and vice president for the upcoming 2020 US presidential election.

US President Donald Trump on Tuesday tweeted that the 2020 Republican National Convention, originally set to take place in Charlotte, North Carolina, will no longer be held there, as the state governor "failed to guarantee" that the GOP could use the Spectrum Arena.

Because the North Carolina governor, Roy Cooper, has kept the state's "Shelter-In-Place Mode", Republicans are now "forced" to seek another state to hold their convention, Trump tweeted, apparently referring to social distancing restrictions imposed in the state amid the coronavirus pandemic.

...then tell them they will not be able to gain entry. Governor Cooper is still in Shelter-In-Place Mode, and not allowing us to occupy the arena as originally anticipated and promised. Would have showcased beautiful North Carolina to the World, and brought in hundreds of...

...millions of dollars, and jobs, for the State. Because of @NC_Governor, we are now forced to seek another State to host the 2020 Republican National Convention.

​The 2020 Republican National Convention, scheduled for August, has the political party officially announce its nominees for president and vice president for the upcoming presidential election. Another goal of the convention is said to be the adoption of a comprehensive GOP policy platform and an effort to unify the party. Since Republicans currently hold the White House, their convention will be held after the Democratic National Convention, which is set to be held in Milwaukee, Wisconsin, over 17-20 August, although the possibility of a virtual convention remains on the table.

In November 2018, Trump announced that Mike Pence would remain as the US vice presidential running mate for the upcoming election.

Currently, the presumptive Democratic nominee for the presidential race in November 2020 is former vice president Joe Biden, who has yet to choose a running mate but has vowed that it will be a woman.