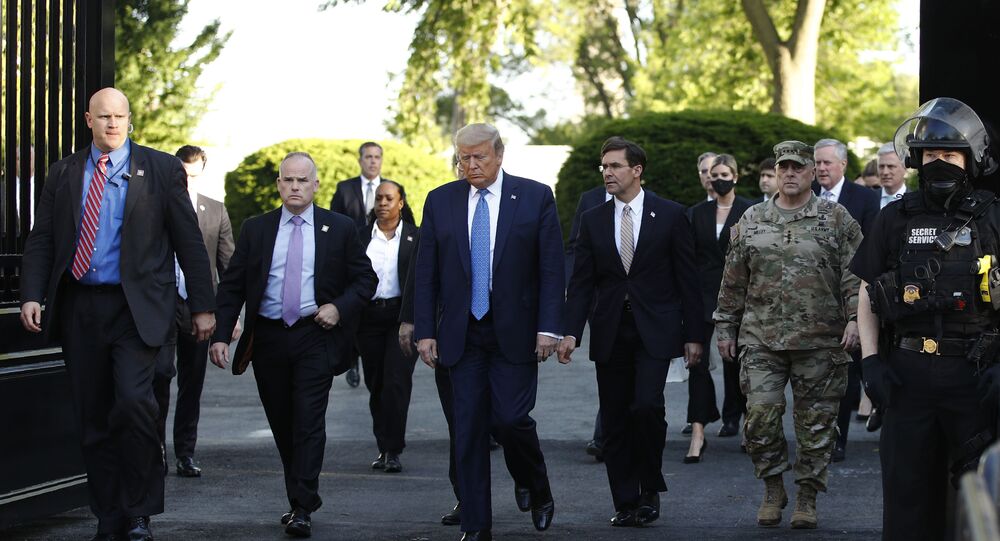 On Monday, US President Donald Trump was seen walking from the White House across Lafayette Park, where protesters had just been dispersed with tear gas, rubber bullets and flash-bang grenades. The president was then spotted in front of St. John's Episcopal Church, damaged in a fire on Sunday night, posing for a prearranged photo opportunity.

US Defence Secretary Mark Esper and Joint Chiefs of Staff Chairman Gen. Mark Milley were not aware they would be accompanying US President Donald Trump in his widely-criticized photo-op in front of St. John’s Episcopal Church, set on fire Sunday night, a senior Pentagon official told reporters on Tuesday, according to The Hill.

The unnamed Pentagon official said that Esper and Milley, who joined Trump for his walk from the White House to the church after police forces dispersed protesters in the area, had earlier arrived at the White House to inform the president about the readiness of the military to take part in addressing the ongoing nationwide protests.

“Their understanding was they were walking out of the White House to walk through Lafayette Park to review efforts to quell the protesters,” the senior DoD official said of Esper and Milley, cited by the outlet. “They were not aware that the park police and law enforcement had made a decision to clear the square”.

MORE: "They were not aware that the park police and law enforcement had made a decision to clear the square... Once they walked out, they continued with him."

On Monday, Trump said that he would deploy US military assets to states that have not invited the National Guard in sufficient numbers to “dominate” the streets, the president's idea to deal with the ongoing protests across the country over the murder of African American George Floyd by a white Minneapolis police officer.

Trump, joined by a group of top officials with his administration, walked from the White House across Lafayette Park to St. John's Episcopal Church, which had been vandalized the previous day.

Trump’s walk to the historic church, in front of which he took photos in which he was seen to display a Christian Bible upside-down and backwards, came shortly after police had forcibly cleared protesters from the area.

On 25 May, an African-American resident of Minneapolis named George Floyd was killed by a white police officer while being arrested. The officer who killed Floyd, identified as Derek Chauvin, put his knee on the victim's neck and kept it there for over 8 minutes, even after Floyd gasped “can't breathe” and begged for air.

All four officers involved in the arrest and death were quickly fired after the incident, and three days later, as protests spiraled out of control, Chauvin was subsequently arrested on third-degree murder charges.

The tragic has incident has triggered ongoing nationwide demonstrations across the US and in many international cities.