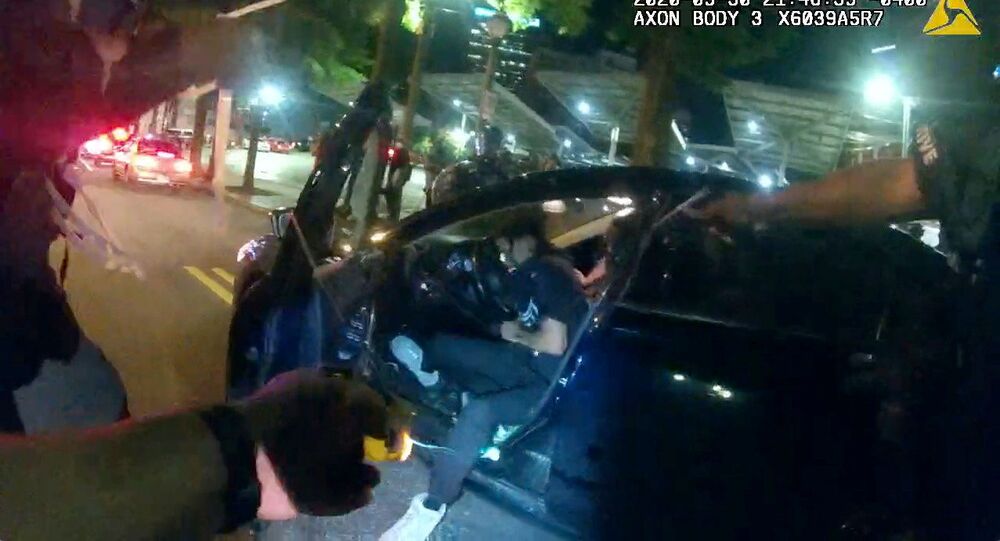 Georgia’s Fulton County District Attorney’s Office has charged six current and former officers of the Atlanta Police Department (APD) with a litany of charges following their escalation of a traffic stop that has been denounced by the city and the police chief.

Their arrest warrants were issued the same day. Gardner and Streeter were fired Sunday in the wake of the incident.

NEW: These are the six Atlanta Police officers being charged in the tasing arrest of two local college students Saturday. The first two men (top left)have been fired. New details at 5 and 6 on @cbs46. pic.twitter.com/UeqEksmEF9

Hood had charges of aggravated assault and simple battery leveled against him. Both Claud and Sauls were charged with criminal damage to property.

It’s worth noting that under Georgia law, Tasers, which several officers used during the traffic stop, are considered deadly weapons.

The DA highlighted that the uncommon presence of living witnesses and the existence of body camera footage allowed the county to act quickly regarding this officer-involved matter.

Regarding Pilgrim, Howard said that while she was not charged with a crime, her vehicle was damaged, and she was “viciously tased” before being “thrown to [the] paved street and handcuffed illegally” by APD officers. She was also subjected to possible exposure to the COVID-19 novel coronavirus after she was “placed in a police vehicle with two other females without a mask.”

Citing police statements, Sputnik reported Monday that the situation began with an attempted reprimand to the students for impeding traffic in downtown Atlanta, but things allegedly escalated after one cop presumed Young was reaching for a firearm.

Howard argued that available APD body camera footage and other recordings from the scene did not provide any reference to a possible firearm until after the incident.

“You see the gun? Yeah, he pulled out a gun,” one officer is overheard claiming at the 4:50 timestamp in the footage below.

The Atlanta Journal-Constitution has reported that neither Pilgrim nor Young will be charged in connection with the Saturday incident, but the Associated Press detailed that Young is still facing a charge of attempting to elude an officer. Atlanta Mayor Keisha Lance Bottoms has called for a dismissal of all possible charges against the young adults, and APD Chief Erika Shields apologized to Pilgrim and Young during a Sunday news conference, Sputnik reported.

Howard argued that Young did not elude police, but drove away after being instructed to “go, or go to jail.” Furthermore, the 22-year-old fractured both his left arm and wrist after being tased twice and manhandled by police. He has since received two dozen stitches and a cast for his wrist.

The DA noted that one officer with the police force provided a statement claiming that the car almost ran him over, but his office was unable to find video evidence to back up this allegation.

“I feel a little safer now that these monsters are off of the street and no longer able to terrorize anyone else,” Young said on Tuesday, according to AP.