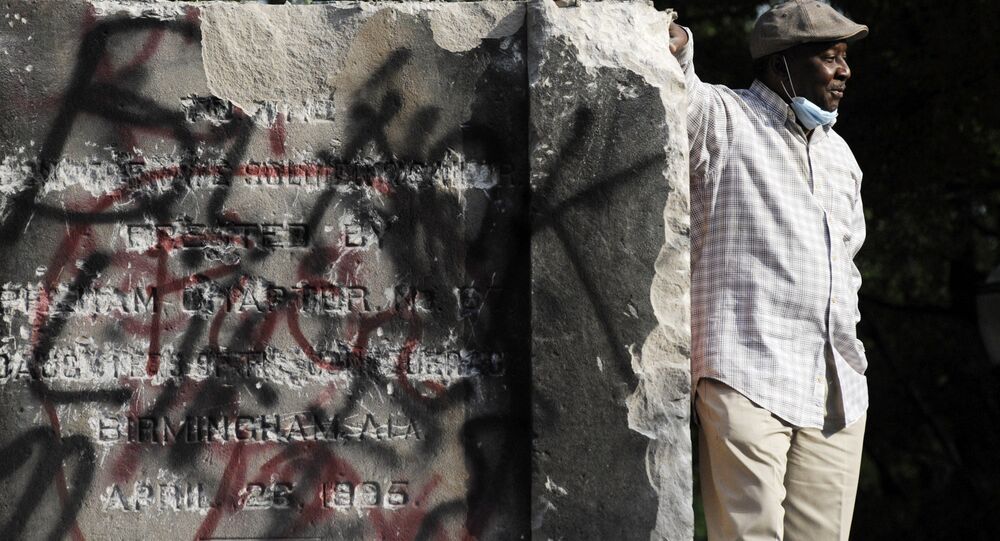 At Birmingham Mayor Randall Woodfin’s request, workers began removing the controversial Confederate Soldiers & Sailors Monument from Linn Park on Monday night and are expected to conclude the process on Tuesday.

Local news outlet WVTM livestreamed the post-American Civil War monument’s removal, which has taken place in a series of steps.

The June 1 initiation of the process coincided with the 212th birthday of Jefferson Davis, president of the Confederacy, and came about as a direct result of recent anti-racism demonstrations that took place in the predominantly black city.

According to CBS 42, several protesters attempted to damage the monument on Sunday night, but they were unsuccessful in toppling it. At least two dozen people were arrested over the weekend, and 14 businesses were burglarized.

“In order to prevent more civil unrest, it is very imperative that we remove this statue,” Woodfin told AL.com on Monday. “I understand the AG’s [attorney general’s] office can bring a civil suit against the city, and if there’s a judgment rendered from a judge then we should be held accountable, and I am willing to accept that because that is a lower cost than civil unrest in our city.”

Woodfin, like many mayors across the US, has placed the city under curfew in hopes of better protecting peaceful protesters and curbing looting and other crime that is concurrently taking place.

The August 2017 “Unite the Right” rally in Charlottesville, Virginia, previously ignited a national conversation regarding the place of Confederate monuments in modern-day society.

However, months before the white supremacists and neo-Nazis clashed with counter-protesters, the Alabama Legislature passed the Alabama Memorial Preservation Act. The May 2017 legislation requires local governments to obtain state approval before removing - or even renaming - monuments aged 40 years or more.

The office of Alabama Attorney General Steve Marshall cited this legislation in an August 2017 lawsuit against the city of Birmingham and then-Mayor William Bell, who had ordered a covering of the Confederate Soldiers & Sailors Monument’s southern entrance.

The law was referenced again on Monday as Marshall declared that a one-time fine of $25,000 would result from the “removal of the monument in question.”

Woodfin noted during a Tuesday news conference that the new location of the monument will not be disclosed “due to security reasons.”

Justin Wilson, the mayor of Alexandria, Virginia, announced via social media that the city was removing “Appomattox,” a Confederate statue by Caspar Buberl that was erected decades after the Civil War’s conclusion.

Alexandria, like all great cities, is constantly changing and evolving. pic.twitter.com/CZTjlOkpfT

Unlike Alabama, Virginia state law permits city governments to remove Confederate monuments at their own discretion. Speaking to the Washingtonian, Wilson noted that the recent removal was in the works for quite some time, but was accelerated on Monday to “ensure there was no drama about it.”

“We did not want to see a repeat of Charlottesville or anything else,” he said.