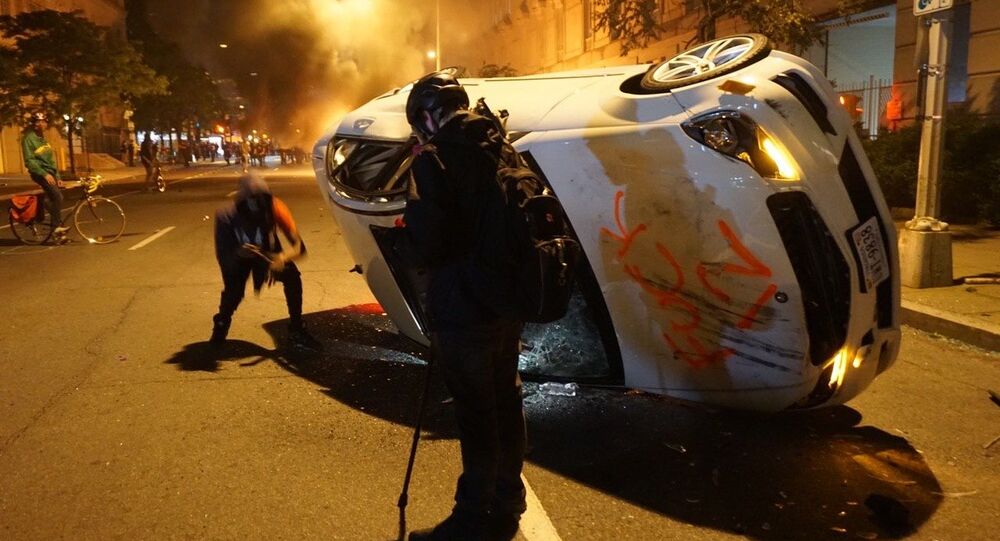 'Grossly Unjustified': ACLU Demands Probe Into Tear-Gassing of Protesters Prior to Trump Photo-Op

The American Civil Liberties Union (ACLU) has demanded a congressional probe into the “grossly unjustified” use of violence against peaceful protesters on Monday night so that US President Donald Trump could walk to and take a photo in front of the St. John's Episcopal Church in Washington, DC.

Hundreds of protesters, including Sputnik journalist Nicole Roussell, were violently cleared from Lafayette Square, where they were peacefully protesting the brutal police murder of unarmed African-American man George Floyd last week. The ambush was carried out by the National Guard, the US Park Police and the Secret Service, whose use of force left Roussell and many others bruised and bleeding. After the protesters were aggressively dispersed, the president visited the historic church, which had been set on fire Sunday.

​“This appears to be grossly unjustified use of a chemical weapon on protesters and raises serious human rights concerns under international law. Elected officials, including Congress, must investigate this politically-motivated, life-threatening use of indiscriminate weapons,” the ACLU tweeted Tuesday morning.

Rep. Jerrold Nadler (D-NY), chair of the House Judiciary Committee, also censured the use of force on protesters.

"President Trump has always shown us exactly who he wants to be - a dictator," Nadler said in a statement on Monday night, Common Dreams reported.

"Today, Trump demonstrated once again that he is incapable of leadership and knows only how to sow division. In the midst of the coronavirus pandemic, which has disproportionately impacted African Americans, the killing of George Floyd tore open a deep wound in an already grieving nation.”

“Understandably frustrated, thousands of Americans - the vast majority of whom are peacefully exercising their constitutional rights - have taken to the streets to make clear their anguish and frustration with a society that has not addressed the fundamental problems of racial and economic inequality,” Nadler added.

In a news conference in the White House Rose Garden on Monday evening, Trump said he would deploy the US military to states that don't use the National Guard in sufficient numbers to “dominate” the streets as protests against police brutality rage across the country.

“If a city or state refuses to take the actions that are necessary to defend the life and property of their residents, then I will deploy the US military and quickly solve the problem for them," he threatened.

Rep. Sheila Jackson Lee (D-TX), who is also part of the Judiciary Committee, condemned Trump’s calls for US governors - whom he called “weak” in a White House phone call early Monday - to clamp down on protesters.

"They are not weak, they are confronting the humanity of their people," Lee said on Twitter on Monday. "Violence to suppress protests that are guaranteed by the constitution is unacceptable."