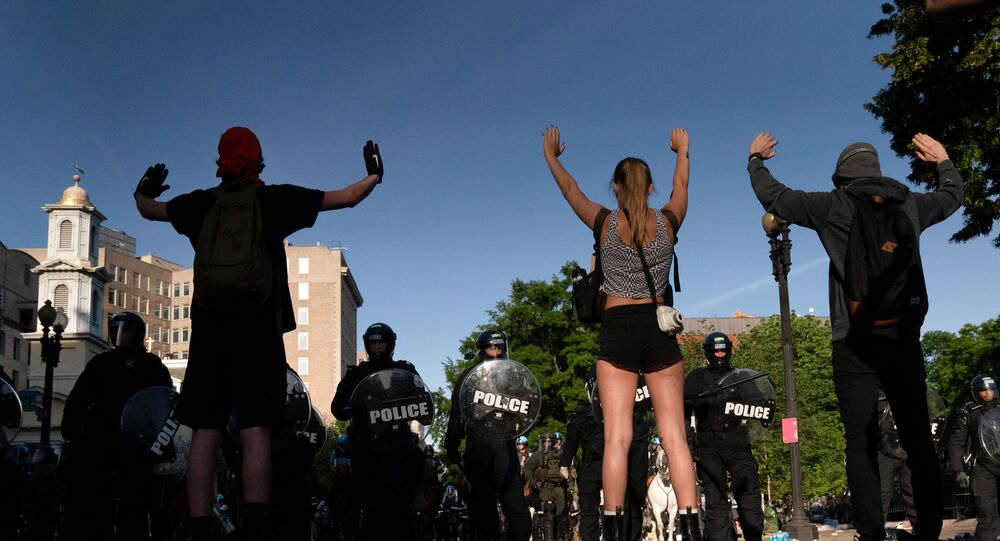 WASHINGTON (Sputnik) - Washington Archbishop Wilton Gregory on Tuesday said it was "reprehensible" that law enforcement officers used tear gas to disperse peaceful protesters near the historic St. Johns Episcopal Church in order to clear the way for President Donald Trump to have a photo opportunity.

"I find it baffling and reprehensible that any Catholic facility would allow itself to be so egregiously misused and manipulated in a fashion that violates our religious principles", Gregory said in a statement. "Saint Pope John Paul II was an ardent defender of the rights and dignity of human beings ... He certainly would not condone the use of tear gas and other deterrents to silence, scatter or intimidate them for a photo opportunity in front of a place of worship and peace".

© Sputnik / Artur Gabdrahmanov
Washington Mayor Says She Does Not See Reason For Using Munition Near White House
Nicole Roussell, a Sputnik journalist who was at the scene, said police fired toward her with tear gas and a stinger grenade, which caused three very painful welts on her hip and thigh, and shot her with a rubber bullet in the calf.

On Sunday, RIA Novosti correspondent Mikhail Turgiyev was pepper-sprayed in the face by a Minneapolis police officer despite identifying himself as a reporter, also while covering the protests.

The protests erupted across the nation after George Floyd, 46, an African American, died on 25 May in Minneapolis police custody after a white officer, Derek Chauvin, knelt on his neck for at least eight minutes. Video evidence surfaced the following and sparked nationwide protests, many of which have led to violence and rioting.