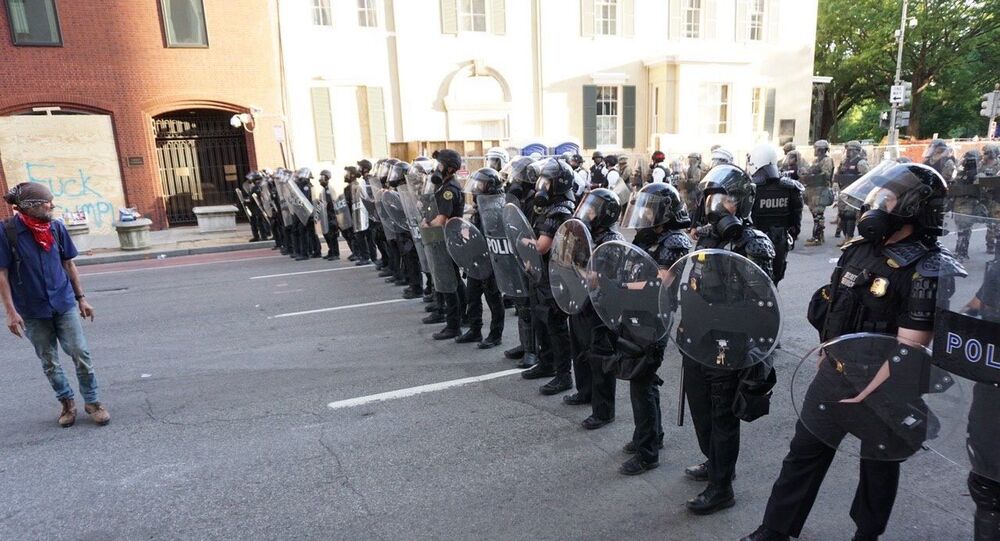 The protests over the death of George Floyd, an African-American man who died at the hands of a white police officer, are continuing unabated in the United States. From Minneapolis, where Floyd died, to Washington, DC, journalists covering the demonstrations have been repeatedly assaulted by the police and protesters.

Nicole Roussell, a Sputnik journalist in Washington, DC, said she was shot by police at a protest over the death of George Floyd near the White House, despite the fact that she identified herself as a journalist and showed officers her press card. The incident occurred when police started dispersing a large group of demonstrators that were protesting peacefully. Together with her colleague, she went close to the scene thinking that being a journalist she would be protected.

"I kept saying 'I am a journalist', I showed my press card. I said I’m press and the officer in the riot gear said 'move back'. I was walking backwards and still saying I’m press; the military police as he was looking me in the eyes shot me with a barrage of stinger grenades. I have about seven welts and wounds up and down the right side of my body. Here on my calf you can see… this was a rubber bullet, it’s bloodied and bruised, the skin is ripped up and there are welts up and down on my back, on my side", Roussell said.
© AFP 2021 / CHANDAN KHANNA
Press Under Attack: List of Journalists Injured During George Floyd Protests

But this was not the end of the attack. When police in riot gear started pushing demonstrators from the area, one of them shoved Nicole to the ground. "Again I’ve just been saying 'I’m press'. He shoved me to the ground and trampled me. There was a protester that helped me up. My other colleague was streaming", she explained.

According to Nicole, police used various stinger grenades, tear gas, rubber bullets, and lots of flash grenades as they were trying to quash the peaceful protest. "These were huge assaults on press, on freedom of speech, on protesters", Roussell said.