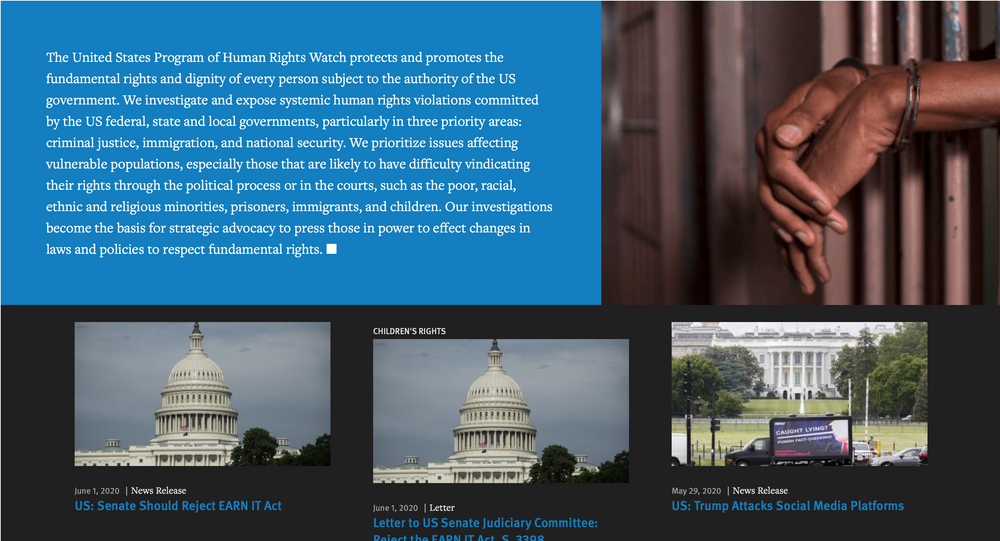 Ever since the murder of George Floyd by a Minneapolis police officer on 25th May, righteously enraged Americans have taken to the streets of almost every major US city in protest, leading to at-times incendiary clashes with law enforcement.

Photos and videos of police employing force against both violent rioters and peaceful demonstrators have circulated widely on social media, National Guard troops are deployed across the country to enforce curfews, and President Donald Trump has made numerous statements that have attracted significant controversy, such as promising “when the looting starts, the shooting starts”.

In such times, people the world over almost reflexively look to international human rights organisations for information, condemnation, and action. However, anyone visiting the website of Human Rights Watch in search of any of those vital services will be left wanting - for despite professing to be “one of the world's leading independent organizations dedicated to defending and protecting human rights”, not a single mention of Floyd, or the viciously heavy-handed response to the protests his killing inspired, can be found as of 1st June.

© Photo : Screenshot
Screenshot of search results on the official website of the Human Rights Watch

Human Rights Watch has commented on the issue and made statements on Twitter, but the official website has nothing but a brief mention of the protests in Minnesota and around the US.

HRW’s deafening silence is even more bewildering given what reports the organisation has issued over the prior seven days - police brutality against anti-lockdown protesters in Ecuador, a death sentence in Singapore being issued via Zoom, and state welfare provisions for meat packing workers in Germany, were all considered to be suitably notable topics for publication.

In a sense however, that HRW is seemingly turning a blind eye to the humanitarian crisis unfolding on Stateside streets perhaps isn’t too surprising - for the organisation’s tendency to overlook, if not endorse, US human rights abuses, while greatly amplifying or even exaggerating alleged abuses carried out by Washington mandated ‘enemies’ around the world, has been well-documented.

Founded in 1978, then-named Helsinki Watch, its original title reflected HRW’s highly politicised objectives and raison d’etre. The organisation was set up specifically to monitor the compliance of the then-Soviet Union and Eastern Bloc with the 1975 Helsinki Accords, and avowedly sought to “name and shame” governments in order to influence public opinion and government policy. While its nomenclature has changed, its focus has only barely widened - and what criticisms of US human rights abuses at home and abroad HRW does publish rarely ever rise above the meek and mild.

For instance, in 2009 the newly-elected Barack Obama administration made clear it wouldn’t be jettisoning the Bush-era policy of ‘extraordinary rendition’ - the illegal practice of abducting individuals suspected of involvement or connections to terrorist groups, and transporting them around the planet to ‘black sites’ to be brutally tortured.

The strategy led to the creation of several dedicated campaign groups, some of which offer pro bono legal support to rendition's countless victims - HRW didn’t seem quite so concerned however, with then-Washington advocacy director Tom Malinowski going so far as to argue “under limited circumstances", there was "a legitimate place” for renditions, and even urging critics to just be patient while Washington simply worked out a far nicer, cuddlier way of extracting information from foreign suspects.

“They want to design a system that doesn’t result in people being sent to foreign dungeons to be tortured, but designing that system is going to take some time,” he said.

Malinowski’s subservience to power paid off - four years later, he was appointed to the Obama administration as Assistant Secretary of State for Democracy, Human Rights and Labor. It’s unknown whether in the context of this role, he ever sat in on the weekly White House “Terror Tuesday” meetings, in which the then-President and staff discussed the progress of his administration’s policy of extrajudicial drone assassinations, a strategy which led to the deaths of numerous innocent people, including women and children.

Not long after Malinowski’s elevation, the US was openly deliberating whether to carry out airstrikes in Syria, in direct violation of the UN charter, HRW executive director Kenneth Roth speculated on Twitter whether a ‘symbolic’ bombing would be adequate.

His comment prompted John Tirman, executive director of MIT’s Center for International Studies, to dub the tweet “possibly the most ignorant and irresponsible statement ever by a major human-rights advocate”.

“HRW’s deep ties to US corporate and state sectors should disqualify the institution from any public pretense of independence. Such a claim is indeed untenable given the US-headquartered organization’s status as a revolving door for high-level governmental bureaucrats. Stripping itself of the ‘independent’ label would allow HRW’s findings and advocacy to be more accurately evaluated, and its biases more clearly recognized,” Bernie Sanders’ Communications Director Keane Bhatt wrote that year.

​More recently, Roth has taken to supporting US covert action in Latin America. In November 2019, a violent coup in Bolivia saw left-wing President Evo Morales deposed and flee the country, scores of government officials and journalists arrested, and untold numbers of protesters killed, with security forces granted carte-blanche to murder and torture whoever they pleased by the imposition of a law offering blanket immunity for any and all crimes committed by authorities during the “re-establishment of order”.

In its report on the crisis, HRW didn’t use the term “coup” at all, claimed Morales had in fact “resigned” and merely “traveled to Mexico”, and expressed hope the newly-installed junta would “prioritize rights”.

​Roth bent over even further on Twitter, suggesting the elected head of Bolivia being ejected from office at literal gunpoint was in fact a tremendous step forward, and claiming Morales was “the casualty of a counter-revolution aimed at defending democracy”. He also ironically condemned Morales’ alleged sanctioning of lethal force against violent protesters.

Sputnik has contacted HRW seeking clarity on the organisation's apparent inability to publish any content whatsoever related to the murder of George Floyd, and the protests that have resultantly raged countrywide all week, but is yet to receive a response.