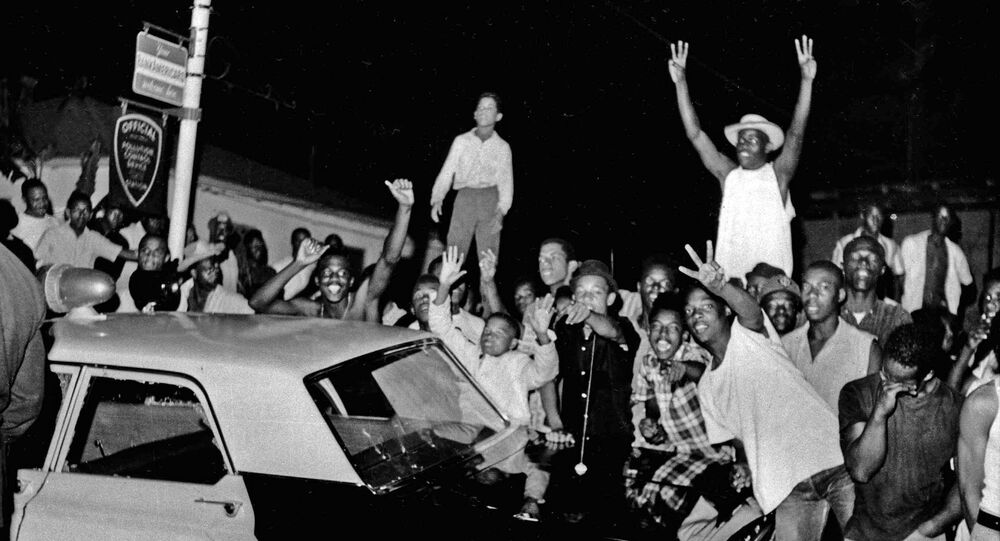 Riots have broken out in several US cities as protesters demonstrate about George Floyd, an African-American man who died in Minneapolis last week after a police officer knelt on his neck.

Sunday was the sixth night of disturbances in Minneapolis with rioting spreading to Philadelphia and Los Angeles and night-time curfews being imposed from Washington DC to Houston.

Minneapolis police officer Derek Chauvin has been charged with third degree murder and manslaughter after he was caught on video kneeling on Mr Floyd’s neck for nine minutes after arresting him about a forged US$20 bill.

“I don’t see any indication that there were any white supremest groups mixing in. This is an ANTIFA Organization. It seems that the first time we saw it in a major way was Occupy Wall Street. It’s the same mindset.” @kilmeade @foxandfriends TRUE!

​US President Donald Trump has been criticised for his reaction to the events on social media, including one tweet in which he said "when the looting starts, the shooting starts."

Trump has blamed left-wing agitators for the violence and has promised to designate an amorphous group known as Antifa as a terrorist organisation.

George Floyd is the latest in a long list of African-American victims whose suffering has triggered urban spasms of violence but the causes of US race riots have often been complex.

The 19th century is a litany of race riots in the United States, both before and after the Civil War which ostensibly lifted African-Americans out of slavery.

The city of Cincinatti had riots in 1829, 1836 and 1841 when white mobs attacked “free blacks”, who had mostly bought their way out of slavery and moved north looking for work.

Racial tension in American cities remained and it only took a spark to light these tinderboxes.

Jack Johnson had become the first black world heavyweight champion when he defeated Tommy Burns in Australia in 1908 but two years later white Americans hoped he would be dethroned by former champ Jim Jeffries in the “Fight of the Century” in Reno, Nevada.

​In July 1910 Johnson completely dominated the ageing Jefferies, finally knocking him out in the 15th round.

As soon as the news reached Chicago, New York, Boston and other cities race riots broke out with angry white mobs turning on African-Americans who had been celebrating Johnson’s victory.

Up to 30 people were killed, with deaths being reported in towns as far away as Omaha, Nebraska and Little Rock, Arkansas.

President William Taft - who had turned down a request by promoter Tex Rickard to referee the bout - was dismayed by the riots and encouraged Congress to pass laws which made it harder to export footage of boxing matches which might incite racial tensions.

Johnson - who had several white girlfriends - was later convicted on trumped up charges, went into exile and was forced to defend his title in Europe.

In 2018 Trump gave Johnson a posthumous presidential pardon, three years after Barack Obama had passed up the opportunity.

The rioting which broke out in the predominantly African-American district of Watts in south central Los Angeles in August 1965 came out of nowhere and was a huge shock to most people in the United States.

The spark was a routine traffic stop - white California Highway Patrol officers pulled over two black stepbrothers, Ronald and Marquette Frye, on a Wednesday evening as they drove their mother’s car.

All these riots were centered around police brutality. Want the riots to stop? Reform the police.

​It was a low-key traffic stop around 7 p.m. on a Wednesday evening that ignited what would become known as the Watts Riots.

Marquette was arrested for driving while intoxicated and began scuffling with the patrolmen.

A crowd gathered and their anger at the heavy-handed treatment of the Frye brothers boiled over. Bottles and stones were thrown at buses and cars and before long the mob was setting buildings on fire.

The riot lasted for six days, led to 34 deaths and 4,000 arrests, and cost US$40 million in property damage.

Eventually the National Guard were called in.

California’s Governor Pat Brown set up the McCone Commission, which investigated the cause of the riots and blamed high unemployment, poor schools and bad living conditions in Watts but largely cleared the police of any blame.

“In the final analysis, a riot is the language of the unheard. And what is it that America has failed to hear?” pic.twitter.com/Als3jhxaGH

​It later emerged that President Lyndon B. Johnson had argued with civil rights leader Martin Luther King about the riots.

King complained to Johnson that the mayor of Los Angeles, Sam Yorty, was "absolutely insensitive” to the issue of police brutality.

King said: "So that I'm fearful that if something isn't done to give a new sense of hope to the people in that area - and they are poverty stricken - that a full-scale race war can develop here.”

The killing of King, who had spent years campaigning for African-Americans’ civil rights to be respected especially in the Deep South, triggered a furious response in black neighbourhoods across the US.

Riots broke out in Chicago, Baltimore, Washington DC and Kansas City and there were 40 deaths and 15,000 arrests.

At one point rioting came within two blocks of the White House.

The city’s mayor imposed a curfew and banned the sale of alcohol and guns but by the time peace had been restored 1,200 buildings had been burned down, at a cost of US$27 million.

Three days after his death President Johnson declared a national day of mourning but sent his Vice President, Hubert Humphrey, to the funeral.

Two months before King’s death the Kerner Commission produced its report into riots in Detroit in 1967.

The report’s most famous line was: "Our nation is moving toward two societies, one black, one white—separate and unequal."

President Johnson largely ignored the recommendations of the Kerner Commission.

Civil rights legislation was finally passed in the late 1960s and the Jim Crow era came to an end, but most US police forces remained predominantly white even in cities which had large African-American populations.

Black people often complained in the 1970s and 1980s of brutality and harassment at the hands of white cops but it remained hidden…until March 1991.

That night a black motorist Rodney King - who had just been paroled from prison - was ordered out of his car after a 110 mile an hour chase through the San Fernando Valley, near Los Angeles. He was suspected of driving while intoxicated.

Unbeknown to the LAPD officers who forced him to the ground and kicked and beat him with batons for 15 minutes, they were being filmed by a local resident, George Holliday, who heard the commotion.

The video was given to a local TV station and four officers were eventually charged with using excessive force - King had suffered a fractured skull, brain damage and several broken bones.

But when a largely white jury in Ventura County acquitted the men on 29 April 1992 the news met with disbelief and violent anger in Los Angeles.

African-American neighbourhoods like Compton, Watts, Inglewood, Hawthorne and Long Beach erupted and the violence even spread to Hollywood.

The National Guard eventually quelled the violence but only after 63 people had been killed, 12,000 arrested and damage totalling US$1 billion caused.

1992 was a presidential election year and the Democratic contender, Bill Clinton, was quick to blame the incumbent, George H. W. Bush.

Clinton said the riots were caused by "12 years of denial and neglect" of social problems under the Reagan and Bush administrations.

Bush, who put soldiers and Marines on stand-by said: "There are two very different issues at hand - one is the urgent need to restore order….and the second is the question of justice, whether Rodney King’s civil rights were violated. What you saw and what I saw in that video was revolting. I felt anger, I felt pain."

Bush said he was appalled by the “police brutality” on the video and he said many African-Americans felt “betrayed” by the not guilty verdict.

But he said this did not justify the appalling violence during the riots.

Bush lost the White House to Clinton three months later but the new President did little to address the issues of police brutality and in fact he introduced the “three strikes and you’re out” legislation which ended up incarcerating hundreds of thousands of African-Americans.

Brutality by white police officers against African-Americans disappeared off the political radar for another 20 years.

But in August 2014 a black teenager, Michael Brown, was shot dead by police in Ferguson, Missouri.

Brown, 18, was unarmed but was killed by a white police officer, Darren Wilson, who suspected him of a robbery at a nearby store.

In November 2014 a grand jury decided not to indict Wilson in relation to the incident, sparking a new wave of protests in Ferguson, a primarily African-American suburb of St. Louis.

The protests turned into riots but they were tiny compared to the 1992 LA riots, with only 10 people injured and 300 arrested.

Eventually President Barack Obama urged the US Department of Justice to launch an investigation into the law enforcement activities of the Ferguson Police Department and they concluded the agency was continuously engaged in discriminatory practices against the community's African-Americans, while making substantial money from the fines and court charges.

The death of Michael Brown in Ferguson spawned the Black Lives Matter movement.