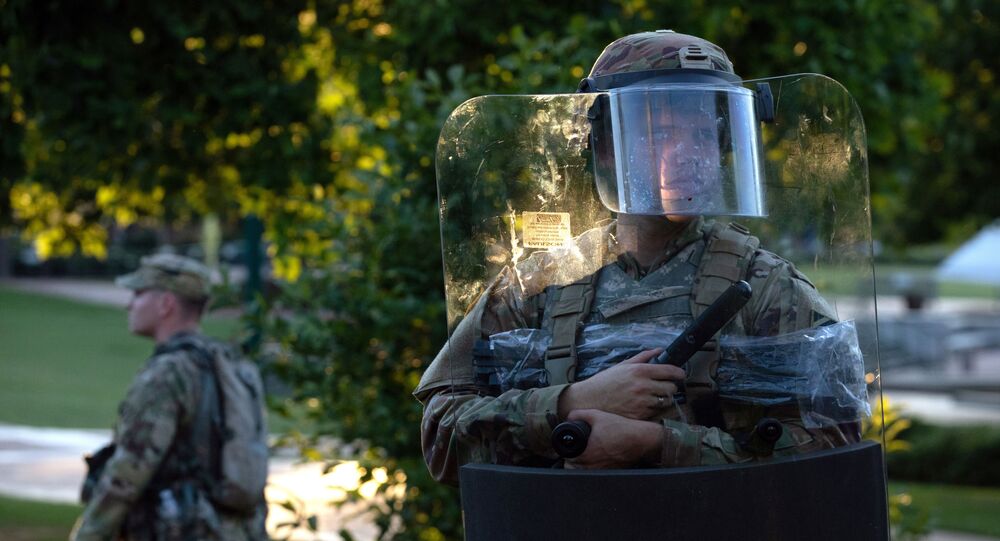 Not all of these states called in the National Guard to respond to the nationwide protests against police brutality that erupted in the wake unarmed African American George Floyd losing his life.

The American military has been monitoring protests and gathering information about them in seven US states, The Nation reported citing Defence Department documents, purportedly obtained from unprotected cloud storage. The media outlet says the documents were later moved to a protected network for classified files, despite only being marked as "For Official Use Only".

According to the cited documents, the military was bracing to respond to emerging riots in five states that have already activated or deployed the National Guard - Minnesota, Ohio, Colorado, Tennessee, and Kentucky, and in two states that have not yet done so - New York and Arizona.

"Without such situational awareness, it would be more difficult for DOD to respond if it becomes necessary", spokesman for the Department of Defence, Chris Mitchell said responding to a question from The Nation about the documents.

Apart from revealing the military's intelligence gathering, the documents described the mission set before the deployed National Guard (NG) as to "augment" local police forces "with a show of force", to provide security for law enforcement agencies and local government buildings, and to "maintain governance".

The alleged instructions varied from state to state. For example, the one drafted for Minnesota, where the protests originally emerged, said that the National Guard has been authorised for "weapon status red". This means that the Minnesota NG will be carrying loaded weapons with safeties on as they try to handle the riots.

Documents for other states stressed problems that might prevent an adequate response to the protests on the National Guard's part. There isn't enough riot gear to equip even minor NG forces deployed in some of the states - between 100 and 500 individuals.

The nationwide protests in the US, which the military is reportedly monitoring, originated in Minneapolis after an African American resident, George Floyd, was killed while beng detained by local police officers. The incident started after a shop owner called law enforcement over suspicions that Floyd allegedly tried to pay him with counterfeit money. During the arrest, one of the officers pressed his knee to Floyd's neck, despite the latter complaining that he "can't breathe".

80% of the RIOTERS in Minneapolis last night were from OUT OF STATE. They are harming businesses (especially African American small businesses), homes, and the community of good, hardworking Minneapolis residents who want peace, equality, and to provide for their families.

Despite the police officers involved being fired and a murder case being opened, protests against police brutality erupted in Minnesota spreading across the country in the following days. Minnesota and Los Angeles called in the National Guard as their police forces were unable to handle the protests that turned violent, with eight more states activating their NG units - Georgia, Kentucky, Wisconsin, Colorado, Ohio, Tennessee, Texas, and Utah. Several cities also announced curfews in an attempt to limit protests and resultant arsons and vandalism.

The riots reached the US capital too, with protesters "besieging" the White House for several days in a row. President Donald Trump has condemned the protests, arguing that they are harming businesses and communities, and called on local governments to do more to curb them, threatening that otherwise, the federal government will intervene.