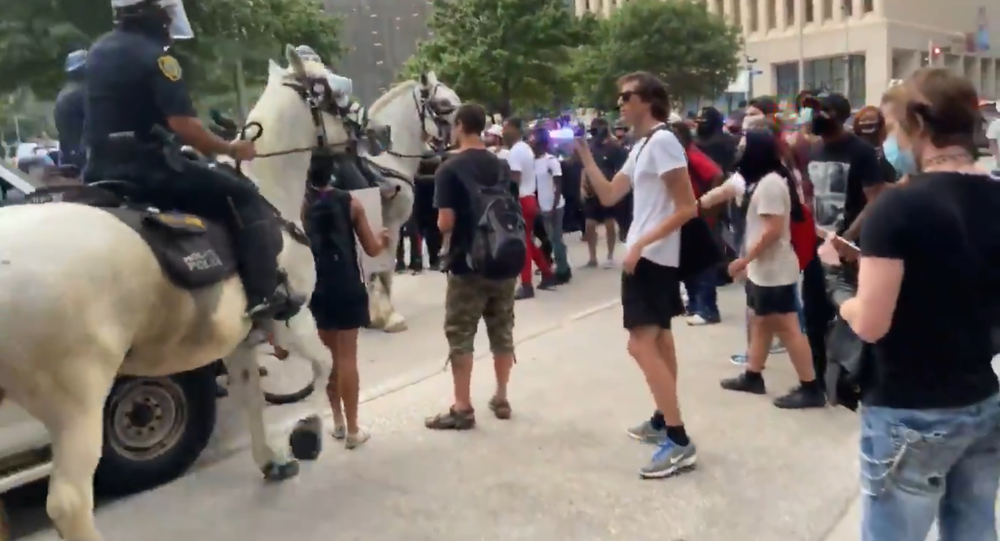 The incident comes after a series of clashes between police and protesters in the United States, as people are holding mass demonstrations following the death of George Floyd at the hands of the Minneapolis police on Monday.

Houston police have launched an investigation after numerous social media accounts posted footage depicting a mounted officer trampling a woman during the "Justice for Floyd" protests on Saturday. The video shows people shouting, and police blowing a whistle at the rally when a white horse suddenly knocks down a woman holding a sign that was standing near the officers.

Dont let them tell you it was peaceful in Downtown Houston #BlackLivesMatter #GeorgeFloyd pic.twitter.com/JWuCRfdlNT

​After trampling the protester, the animal moved closer to other horses, while the crowd burst out in anger, throwing unidentified objects at the mounties.

Commenting on the incident, Houston Police Officers Union Vice President Douglas Griffith stated that the whistle was a warning and blamed the woman for not paying attention.

Exactly. The whistle is to warms people. If you don’t pay attention, then that’s on your!

​Violent protests erupted across the United Stated after a black man from Minneapolis, George Floyd, died in a hospital shortly after being tackled by several police officers. In a video, depicting his arrest, Floyd was filmed pinned to the ground by a white police officer, Derek Chauvin, who was pressing his knee against the man's neck for several minutes, while Floyd repeatedly said that he couldn't breathe.

The Minneapolis Police Department said in a release that Floyd had physically resisted officers when they handcuffed him, noting that he appeared to be suffering from medical distress. Following Floyd's death, Chauvin was charged with third-degree murder and manslaughter, while a total of four police officers have been fired.