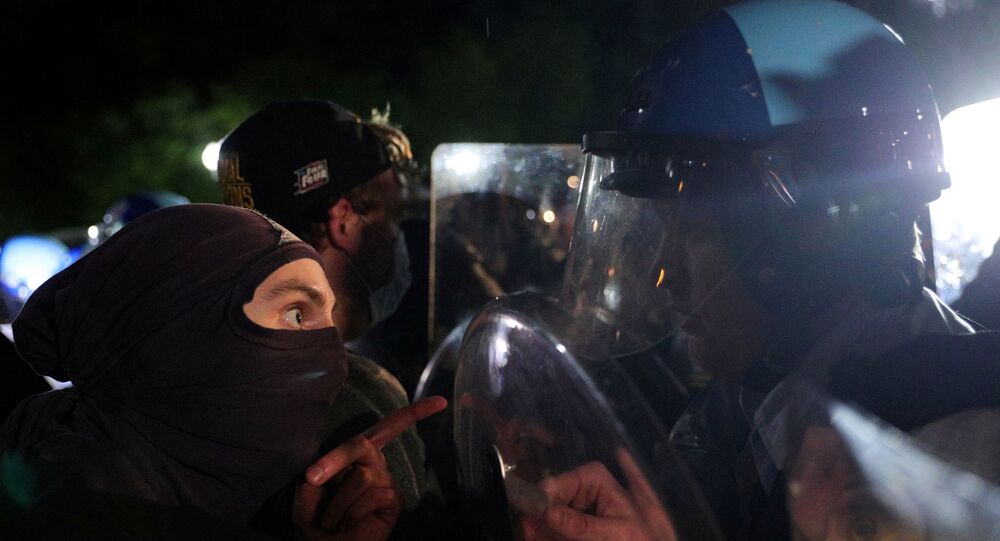 Crowds of protesters gathered in front of the White House overnight Friday following the death of George Floyd, an African-American man from Minnesota, at the hands of police.

US President Donald Trump has commended Secret Service agents for protecting the White House from a public outpouring of anger over the death of George Floyd.

"Great job last night at the White House by the US Secret Service," Trump tweeted on Saturday morning. "I was inside, watched every move, and couldn’t have felt more safe."

He added that the crowd was large and "professionally organised, but nobody came close to breaching the fence. If they had they would have been greeted with the most vicious dogs, and most ominous weapons I have ever seen. That’s when people would have been really badly hurt, at least."

The White House was put under lockdown on Friday as thousands of people marched to the building in a sympathy protest over the death of George Floyd.

The rally had been largely peaceful but tensions escalated after midnight, with reports surfacing that police fired tear gas to disperse the crowd. The lockdown was lifted after several hours and entrances were reopened after the demonstrators left and headed to Capitol Hill.

Similar protests, sometimes violent, erupted across the country, including California, New York, Atlanta, Louisville and beyond, in a show of solidarity with rioters demanding justice for Floyd.

The 46-year-old black man died on Monday after a white Minneapolis police officer kneeled on his neck during an arrest on suspicion of passing a counterfeit bill. Floyd was unarmed, and a video of the incident appeared to contradict police claims that he "physically resisted" the arrest.

Riots have been raging in Minneapolis and neighbouring St. Paul for four days in a row now, with widespread looting and arson. Hundreds of Minnesota National Guard troops and State Patrol officers have been deployed to help contain the riots, while additional hundreds of military police are said to be on alert.

The police officer at the centre of the controversy has been arrested and charged with murder and manslaugher; the three other cops involved in the incident have been fired.