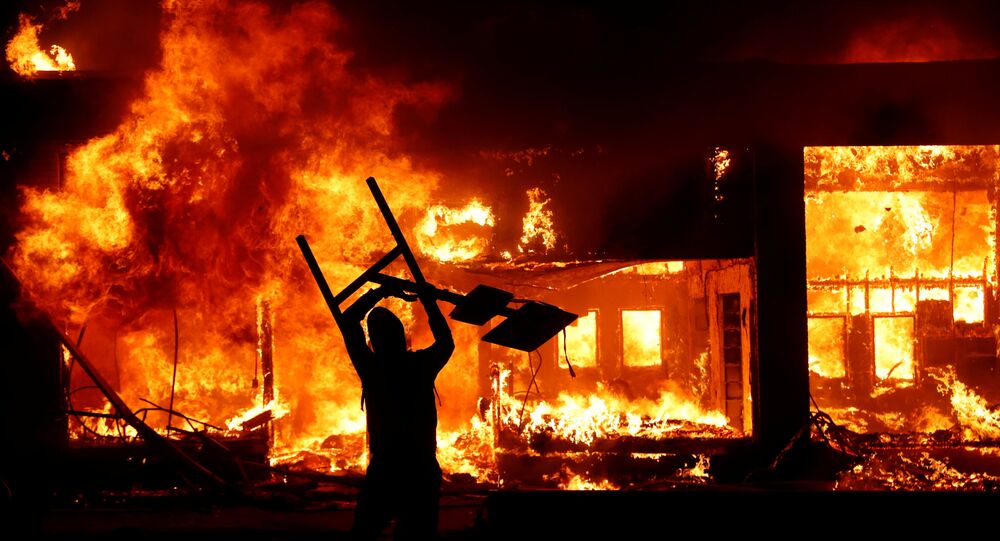 Riots have continued in Minneapolis over the 25 May killing of George Floyd, who was pronounced dead after being manhandled by police. Mayor Jacob Frey has announced a curfew in the city in a bid to control the situation, which has been characterised by looting and arson attacks. The unrest has started to spread to other US cities.

Protests and looting have continued in Minneapolis on Friday night over the 25 May police killing of 46-year-old African-American resident George Floyd.

Stores were looted, and banks and gas stations set afire as thousands of people defied the curfew imposed by Mayor Jacob Frey on Friday.

Stores looted and set of fire for the fourth day in a row now in #Minneapolis, today the mayor set an 8pm curfew, yet organised no one to enforce it 🤷‍♂️ #GeorgeFloyd pic.twitter.com/W1YVuTIXAu

As Minneapolis burns to the ground behind him, MSNBC says “this is mostly a protest”

Journalism is dead in America.

Protesters march up 94 by Loring Park in #Minneapolis pic.twitter.com/uyfb2xSge9

​Despite the arrest on charges of third-degree murder and manslaughter of Derek Chauvin, one of the four former police officers involved in the incident that sparked coast-to-coast outrage, reports of violence and destruction flowed in. Chauvin had used his knee to pin down George Floyd, killing the unemployed bouncer and suspected counterfeiter.

Rioters open, climb in & throw boxes out of UPS truck trying to avoid protest in #Minneapolis

I’m watching this live of the Minneapolis protesthttps://t.co/CWjRncfQlm

​As the city's newly-instituted 8 p.m. curfew began, hundreds of marchers and dozens of cars headed towards Uptown for protests, with a gas station seen burning at one point.

Protesters also made their way to the police department's 5th precinct building, though the situation was relatively calm compared to the chaos of the previous night at the 3rd precinct.

COPS FINALLY SHOW UP: 350+ troopers and officers are on the ground to guard the Fifth Precinct in Minneapolispic.twitter.com/0SgiPd0hYQ

​Police and National Guard members withdrew from the contested Minneapolis 3rd Police Precinct area, firing smoke grenades and flash-bangs, with officers repeatedly broadcasting over a loudspeaker that a curfew was now in effect.

Earlier in the day, some 1,000 protesters shut down the Hennepin Avenue Bridge over the Mississippi River during a peaceful demonstration.

Outrage Over Death in Police Custody

Minneapolis protests began after George Floyd was pronounced dead in hospital after Officer Chauvin had pinned down his neck with his knee for more than seven minutes despite Floyd saying he could not breathe. A video of the incident taken by a by-stander went viral on social media, sparking protests that erupted into chaos, violence and subsequently looting.

“Justice will be served”, said US President Donald Trump, requesting a federal investigation into the incident, with the four officers involved in Floyd's arrest fired the next day.

Outrage over the death of George Floyd sparked protests in cities across the nation on Friday night.

In New York, a chaotic rally was staged in Manhattan in defiance of the coronavirus prohibition on public gatherings by protesters, angry over the death of the black Minnesota man in police custody.

Videos posted on social media showed occasional skirmishes with the police, who attempted to push back the crowd.

The New York Police Department said more than 30 people had been taken into custody.

On Friday, around 200 demonstrators were reported to have been arrested in Brooklyn after a group torched a police vehicle near Fort Greene Park, and pelted a parked police van with bricks and rocks.

Protesters then made an attempt to break into the 79th Police Precinct in the Bedford-Stuyvesant neighbourhood.

​Brooklyn North headquarters and the 88th precincts were also reportedly swarmed by protesters, after a demonstration in honor of Floyd at the Barclays Center arena was broken up by police, seen in video footage on social media pummeling protesters with batons and pepper-spraying them.

The CO of the 88 precinct called a “10-13 for all Available units” at the Precinct, stating “the crowd is very violent use extreme caution” triage being set up for injured Cops in the 88 muster room pic.twitter.com/U19MWZsffR

​Elsewhere across the country, Phoenix police declared an "unlawful assembly" as protesters continued to clash with police downtown, urging everyone to leave the area or face possible arrest.

Meanwhile in #Phoenix , Arizona protesters attack a police cruiser as protests break out in that city this evening.pic.twitter.com/j6S8WaKi4c

​For a second day, protesters gathered in downtown Denver calling for justice in the case of George Floyd, with a crowd gathering at the Colorado State Capitol before marching through the city.

​In Atlanta, the front of CNN Center was the scene of violent protests on Friday evening that resulted in damage to the front of the building and inside. Protests had started as peaceful earlier in the afternoon when crowds gathered in the city's Centennial Park.

It’s not just Minneapolis, we are now seeing protests in cities across the country over the death of George Floyd. This is in Atlanta as some smash the glass at our downtown CNN headquarters. #GeorgeFloyd pic.twitter.com/iwJxFaUfxW