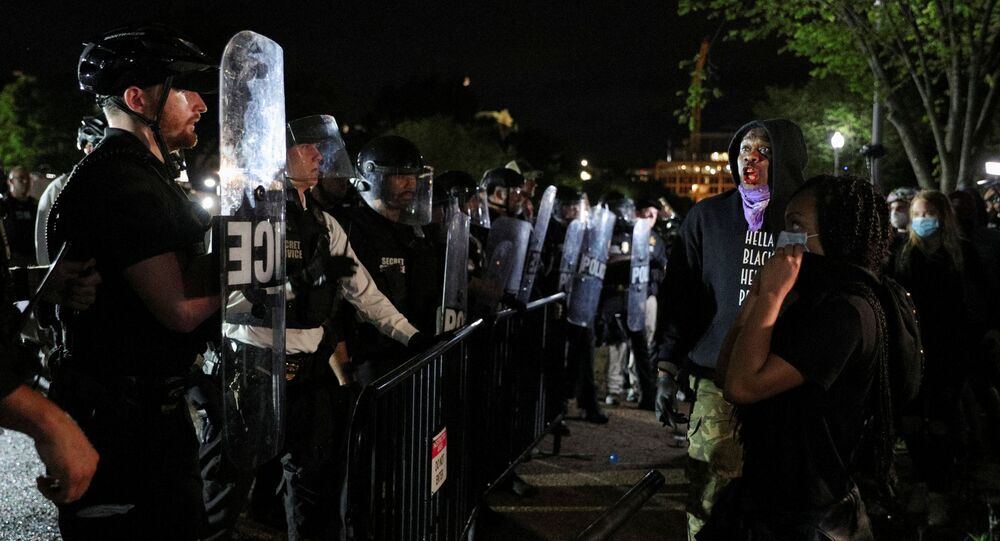 A video that spread online on Tuesday shows a white Minneapolis police officer, Derek Chauvin, pinning George Floyd to the ground with his knee on the alleged counterfeiter's neck for nearly eight minutes. Floyd repeatedly tells him that he cannot breathe until becoming unresponsive. Floyd was pronounced dead at a local hospital shortly thereafter.

Multiple protesters were involved in scuffles with police and threw various objects at them, including water bottles, when trying to breach the barricades that surround the White House.

Rioters outside the White House are stealing barricades from secret service.

How is this helping you get justice for George Floyd??????? pic.twitter.com/BprKj46pWt

Right now at the White House protesters are ripping away the barricades that surround the building.pic.twitter.com/LS2YLtSRnJ

Protesters tear down barricades outside the White House #GeorgeFloydprotest pic.twitter.com/uvPKGzeMGo

At the White House now #GeorgeFloydProtests still happening. Many of the officers guarding the barricade in riot gear just put their helmets on pic.twitter.com/L6MX8Iw3mH

Earlier, US President Donald Trump said that he'd spoken to the family of George Floyd and expressed his hope that legitimate public protests could be prevented from descending into anarchy.

Several cities across the US have witnessed massive protests, which started in Minneapolis, Minnesota, after an African-American resident, George Floyd, died on Monday after being tackled by police and pinned to the ground.

Floyd was pronounced dead in hospital on Monday, having lost consciousness after a police officer had knelt on his neck for more than seven minutes despite Floyd saying he could not breathe. The four officers who were involved in Floyd's arrest were fired the next day. One of the officers, identified as Dereck Chavin, was charged with murder and manslaughter in Floyd's death earlier on Friday.