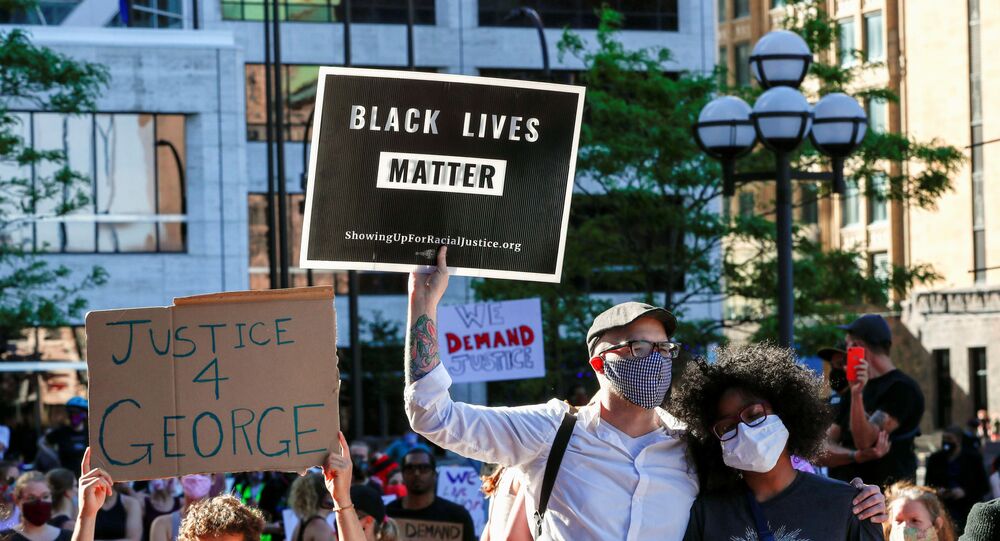 During opening remarks at a roundtable discussion on Friday, US President Donald Trump called the situation in the US city of Minneapolis, Minnesota, "horrible" and said that Minneapolis looters should not down out peaceful protesters.

"It’s a terrible thing. … it should never happen … we are determined that justice be served," Trump said during a livestreamed discussion with industry executives regarding the reopening of the US. "[I] spoke to members of the family [of George Floyd], terrific people."

"We think that we also have to make a statement … very important that we have peaceful protesters … [that the] memory of George Floyd be a perfect memory," Trump added, before stressing that "the looters should not be allowed to drown out the peaceful protesters."

Protests in Minneapolis continued Friday for the fourth day in a row over the fatal Monday arrest of Floyd. On Thursday evening, rioters in Minneapolis set fire to the police precinct where the four arresting officers involved in the case had worked. Other buildings and businesses were also looted and set on fire by rioters.

In follow-up question period after the roundtable discussions, Trump touched on a tweet he fired off late Thursday that stated "when the looting starts, the shooting starts." The president claimed that he was not aware of the racially-charged undertones, explaining that he "heard that phrase for a long time."

"Frankly, it means when there's looting, people get shot and they die," he said, before stating that most of the police he's seen "have been outstanding." However, in regards to the death of Floyd at the hands of police, he said, "it's so bad in so many different ways."

Floyd died Monday after Derek Chauvin, a since-fired police officer with the Minneapolis Police Department, refused to remove his knee from Floyd’s neck. Disturbing cellphone footage captured Chauvin openly ignoring Floyd's pleas, even after he repeatedly said that he could not breathe.

A criminal complaint against Chauvin that was released on Friday indicates that the former officer kept his knee on Floyd's neck for a total of eight minutes and 46 seconds, of which two minutes and 53 seconds accounted for a period in which Floyd had become non-responsive.

Chauvin was arrested and charged on Friday with third-degree murder and second-degree manslaughter in the death of Floyd. Minnesota officials have indicated that additional charges may emerge as the investigation continues.

Officers came in contact with Floyd after dispatchers received a call about a man trying to use forged paperwork at a grocery store. Three other officers who were involved in Floyd's arrest have been fired and are currently under investigation. It's unclear what charges they may face.