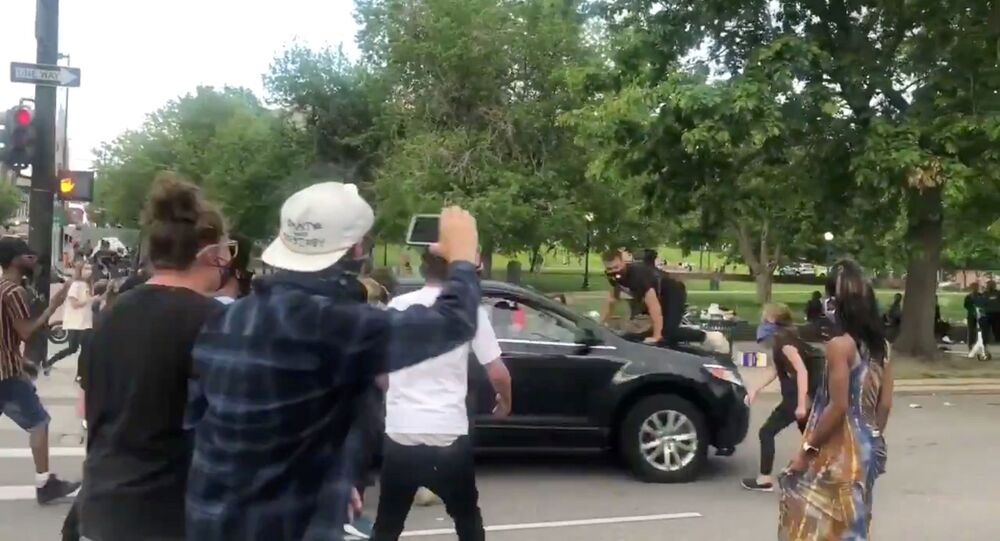 Earlier in the day, US President Donald Trump assured Minnesota Governor Tim Walz that the military is ready to provide assistance and quell the ongoing unrest in Minneapolis if local authorities don't bring the city under control.

Gunfire was heard on Thursday evening outside the Colorado State Capitol in Denver, where people had gathered for a solidarity demonstration in the support of unarmed black man George Floyd, who was killed by police.

A video that has appeared on Twitter shows people occupying the Capitol grounds, who then start rushing towards the building shortly after several shots are being heard.

This is the moment gunshots were fired outside the Colorado State Capitol. #Denver pic.twitter.com/4wBtYJVAbM

​According to spokesman for the Colorado State Patrol, Gary Cutler, the gunfire took place across the street from the Capitol, while another police official said that the shots were directed at the building.

© REUTERS / CARLOS BARRIA
Trump Assures Military is 'All the Way' With Minnesota Governor Amid Riots Over George Floyd's Death
At the same time, State Representative Leslie Herod, who was in the Capitol building at that time said that the perpetrator had been apprehended, though the situation at the scene remained "tense."

George Floyd, a 46-year-old black man died on Monday after being pinned to the ground and tackled by police. One of the four officers involved held a knee to the neck of the man, who was saying "I can't breathe". The police were responding to a call by a local grocery store, after Floyd had allegedly tried to pay with a counterfeit $20 bill.