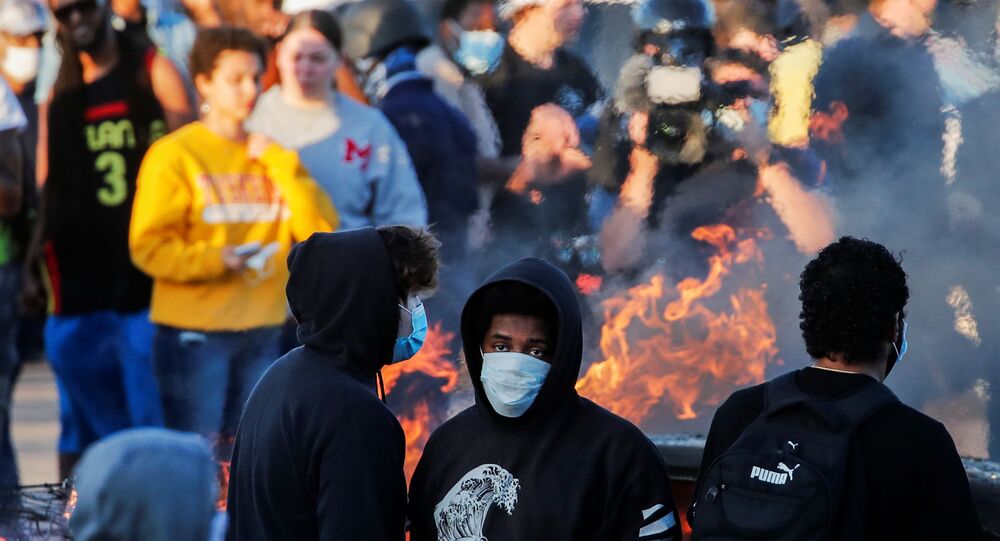 WASHINGTON (Sputnik) - A prosecutor in the US state of Minnesota told reporters that besides the graphic video, there is other evidence that does not support a criminal charge against the officer involved in the case of George Floyd, an African American man who died in police custody.

"That video is graphic and horrific and terrible and no person should do that", Hennepin County Attorney Mike Freeman said on Thursday. "But my job, in the end, is to prove that he violated a criminal statute, and there is other evidence that does not support a criminal charge."

Earlier in the day, Minnesota Governor Tim Walz in a statement said he is sending National Guardsmen to the city of Minneapolis to help maintain the peace in the wake of violence that erupted over the recent death of George Floyd.

Demonstration at Henn Co Gov Center rn in dtown Minneapolis. Calling for officers involved in death of George Floyd to be arrested and charged pic.twitter.com/CueWlFrfTE

Minneapolis Mayor Jacob Frey said the four police officers involved in Floyd’s arrest have been fired and called for the officer with his knee on Floyd’s neck to be placed in custody.

The Minneapolis Police Department said in a press release that four officers appeared at the scene after a call of a forgery in progress and found Floyd sitting on top of a car and appearing to be under the influence. The release said Floyd physically resisted officers when they handcuffed him, noting that he appeared to be suffering from medical distress.

On Wednesday, President Donald Trump ordered the FBI and the Department of Justice to investigate the incident, adding that justice will be served.

At my request, the FBI and the Department of Justice are already well into an investigation as to the very sad and tragic death in Minnesota of George Floyd....

A video that went viral Tuesday showed Floyd pinned to the ground by a white police officer with a knee on his neck for several minutes. Floyd repeatedly tells the police officer that he cannot breathe until he becomes unresponsive. Floyd was taken to a local hospital and died shortly thereafter.

After the video of the incident emerged online, protests erupted in Minneapolis, soon swelling to several thousand people, who smashed the local precinct where the responding officers worked, and other stores were also soon looted. Police have responded to the protests with the prolific use of tear gas and nonlethal ammunition fired into the crowds.