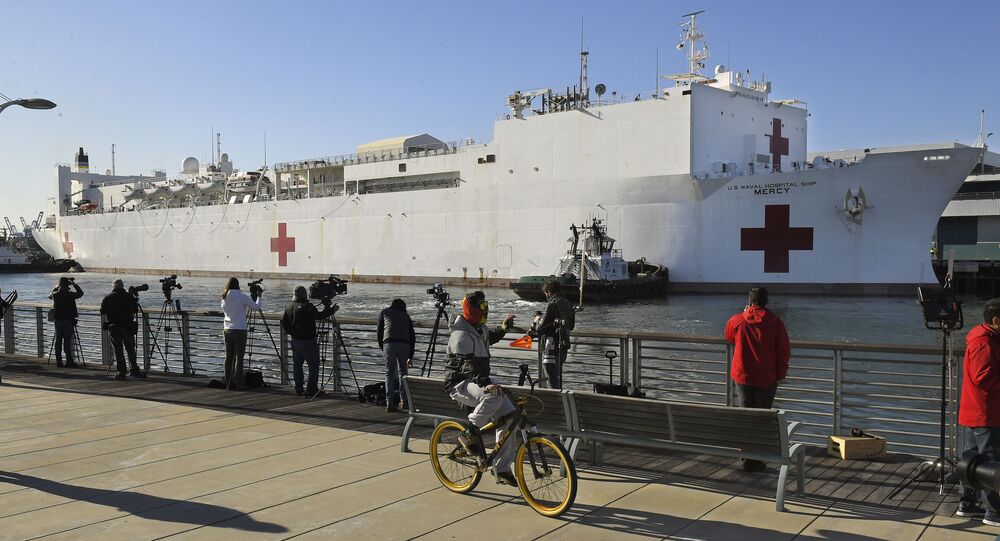 As the US braces for a possible second wave of the COVID-19 novel coronavirus, Secretary of Defense Mark Esper says military aid to address the disease may look different the second time around, because resources were underutilized during the initial outbreaks.

Speaking to the Associated Press for a Thursday article, Esper argued that in the event of a possible second wave of COVID-19 infections, US troops may be deployed in a different way to respond to the country’s needs.

According to Esper, the US Naval Ships Comfort and Mercy - deployed to New York City, New York, and Los Angeles, California, respectively - were underutilized and treated few patients.

“I think that’s a big lesson learned,” he asserted, despite the fact that many medical professionals in New York City argued back in early April that the ships were not providing enough assistance to area hospitals.

Additionally, Army field hospitals were not used to the extent imagined by military officials, and doctors and nurses connected to the pop-up medical centers were eventually sent to local hospitals to relieve overworked medical professionals.

Esper expressed that he and Gen. Mark Milley, the chairman of the Joint Chiefs of Staff, believe the next wave of novel coronavirus infections may not be as big as some projections have hinted at. Smaller waves would lead to a scaled-down response from the military.

© REUTERS / Kevin Lamarque
Dr. Deborah Birx, the White House coronavirus coordinator, and Dr Anthony Fauci, director of the National Institute of Allergy and Infectious Diseases, listen while wearing protective face masks as they stand behind U.S. Defense Secretary Mark Esper as President Donald Trump holds an event about administration efforts to develop a vaccine for the coronavirus disease (COVID-19) pandemic in the Rose Garden at the White House in Washington, U.S., May 15, 2020

The Pentagon is also looking into getting rid of the mandatory 14-day quarantine for seemingly healthy troops who may have been exposed to the virus after Dr. Anthony Fauci, director of the National Institute of Allergy and Infectious Diseases and a scientist on the White House Coronavirus Task Force, and Coronavirus Task Force Coordinator Dr. Deborah Birx suggested the two-week period may be unnecessarily long.

Esper’s targeted approach to dealing with the novel coronavirus appears to be in line with US President Donald Trump’s plan regarding a possible second wave. Last week, Trump noted that while there may be a “very distinct possibility” of a second wave, “we’re not going to close the country. We’re going to put out the fires.”

Trump has previously referred to viral flare-ups in certain areas as “burning embers.”

National Economic Council Director Larry Kudlow spoke with CNBC on Thursday and claimed that there are “glimmers of hope” for the economy, as various states have begun reopening.

“We’re seeing the economy gradually, in phases, reopen in May and June. These are the transition months. We’re actually seeing some glimmers of hope amidst all the hardship and heartbreak,” he said while appearing on the “The Exchange.”

As of this article’s publication, the US has confirmed more than 1.7 million cases of COVID-19 and suffered over 101,000 related deaths, according to Johns Hopkins University. At least 391,500 recoveries from the novel coronavirus have been recorded in the US, and more than 15 million tests for the virus have been administered.

Nobody Hiding Anything: Moscow Mayor Says City Publishes All Data on COVID-19 Mortality