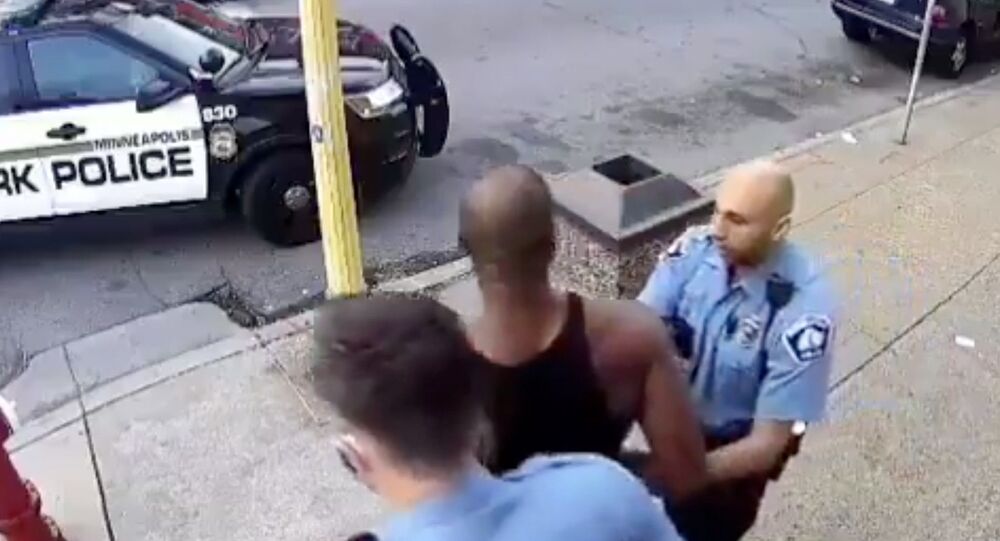 Newly released footage of the Monday night arrest of Minnesota resident George Floyd has offered additional insight into conduct exhibited by police on the scene prior to the fatal move that saw Floyd’s airway blocked for several minutes by an officer.

Earlier this week, the Minneapolis Police Department explained that officers who responded to the scene at a Cup Foods grocery store for a “forgery in progress” call used force against Floyd after he reportedly physically resisted arrest. However, at present, new cellphone and surveillance footage fail to support that claim.

The first video that has surfaced initially shows two officers already approaching Floyd as he sits in the driver’s seat of a black Mercedes SUV. One officer is seen conversing with Floyd with the door open, as the second officer stands by the front passenger door next to an unidentified individual who had been sitting inside the vehicle.

Although the scene appears to be calm at first, that isn’t the case for long, as the 45-second video goes on to show an officer forcefully tugging on Floyd as he moves to stand up. Once the second officer walks over to provide assistance, the remainder of the recording appears to show the two cops body-searching Floyd before placing him in handcuffs.

Despite much of the cellphone recording being inaudible, Floyd can be heard momentarily yelling out toward the end of the footage.

The second video, surveillance footage from the Dragon Wok eatery across the street from the grocery store, shows Floyd sitting on the sidewalk up against a building while an officer stands in front of him. The individual who was previously seen sitting in the passenger seat of Floyd’s vehicle is captured standing in the background, appearing to be questioned by another officer.

The surveillance recording does not provide any audio, although Floyd can be seen briefly exchanging words with the two officers who eventually walk him over in the direction of a police-marked SUV.

It’s unclear how much time elapsed between the ending of the surveillance footage and the start of the now-viral cellphone video that showed an officer kneeling on Floyd’s neck for several minutes as he repeatedly indicated he was not able to breathe.

When reporters asked Medaria Arradondo, chief of the Minneapolis Police Department, on Wednesday about the resisting arrest claims included in the police report of the incident, the official steered away from responding, citing the ongoing investigation.

However, the same could not be said for Minneapolis Mayor Jacob Frey, who told reporters that he has “not seen any evidence to show” that Floyd had been resisting arrest. Frey has also called for charges against Derek Chauvin, the officer who kneeled on Floyd and ignored his pleas.

A number of protests in the city of Minneapolis have taken place and have grown increasingly intense, as local residents have hit the streets to voice their discontent over continued police brutality toward black Americans. Floyd’s death has drawn comparisons to that of Eric Garner, who died in 2014 after an officer with the New York Police Department placed him in a chokehold and refused to release him even when Garner said he couldn’t breathe.

Since reports first emerged of the excessive police force used against Floyd, the four officers involved in the arrest have been dismissed from the department, and an investigation has been initiated with the participation of the Minnesota Bureau of Criminal Apprehension, the FBI and the Department of Justice.

Most recently, US President Donald Trump spoke on the case via Twitter and stated that he had requested that the federal probes into Floyd’s death be “expedited,” later noting that “justice will be served.”

George Floyd's Case: US Police Officers Should be Punished Stricter Over Killings of Innocent - Prof