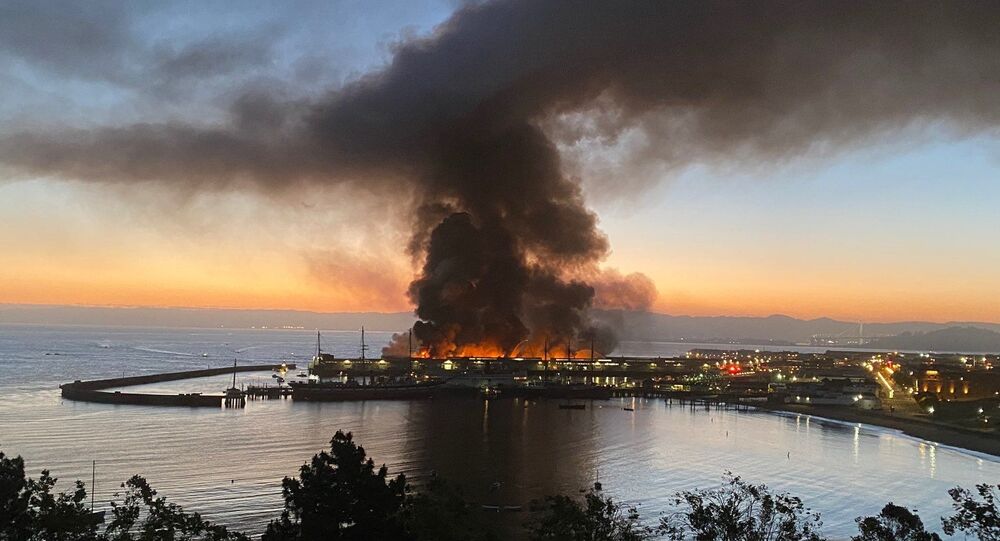 The huge fire is said to have also affected an iconic World War II-era vessel, which prompted firefighters to go above and beyond in their efforts to stop the flames from further damaging the museum-ship.

Black smoke from the fire, which shot over 100 feet (30.5 metres) in the air, can be seen miles away, according to the San Francisco Chronicle.

DEVELOPING: Fire crews are battling a large four-alarm fire burning at a warehouse at Fisherman's Wharf in San Francisco, California. No injuries have been reported, fire officials said. https://t.co/DCXkGjic1q pic.twitter.com/whslv5hDwH

Over 150 firefighters, who arrived to the scene in over 50 trucks, along with fireboats, succeeded in putting out the fire in the warehouse, called Shed C, as well as in preventing the flames from approaching the historic World War II-era ship ‘USS Jeremiah O’Brien’.

No injuries were reported at the warehouse or on the museum vessel, which sustained cosmetic damage after flames licked at it.

“I am very grateful,” said an employee who has worked on the ship for 20 years, cited by the outlet. “This ship, she’s something else. She’s been through a lot. She’s not going to be taken down by a shed fire.”

A fire on Pier 45 in San Francisco’s Fisherman’s Wharf destroyed a portion of a warehouse on the pier.

Viewers video of the massive fire at Fisherman’s Wharf pic.twitter.com/eydzduQS7q

A portion of Pier 45 at San in Francisco’s Fisherman’s Wharf destroyed by fire. Tourist areas unaffected. These are my pix. Tim Ryan has relieved me & on scene now for @KCBSRadio. pic.twitter.com/yahYty1pah

Haunting images from Fisherman's Wharf in SF, where a four-alarm fire destroyed a warehouse at Pier 45. https://t.co/qiNyWQOcBV pic.twitter.com/UyLTDN4d8k

The San Francisco Fire Department said that investigations are underway to identify the reason for the fire.