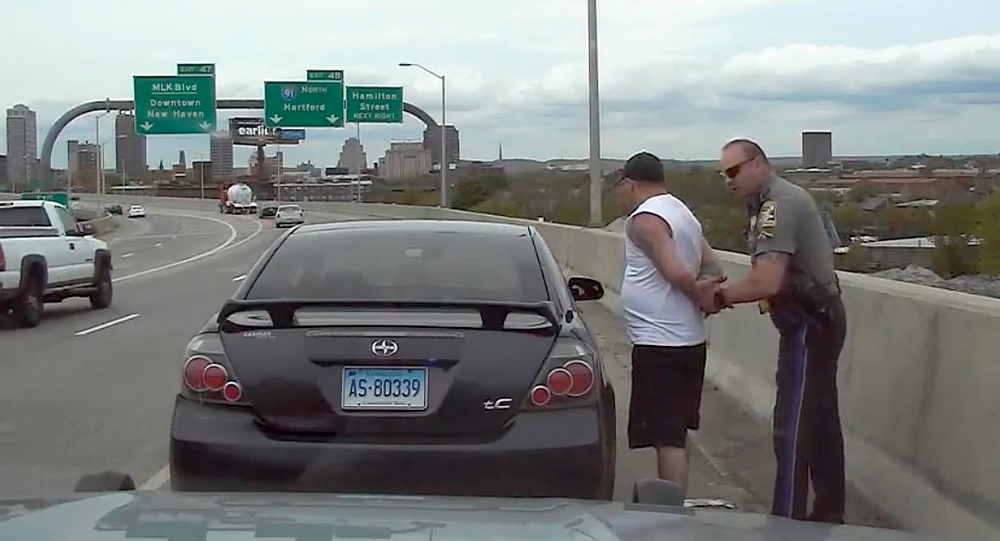 A Connecticut state trooper has been placed on administrative leave in connection to a May 18 traffic stop after a hidden camera recording of the scene in question showed the trooper exhibiting “disturbing” behavior toward a man, according to the state police.

While police officers are trained to de-escalate situations, Connecticut State Trooper Matthew Spina exhibited limited knowledge of the tactic during a potentially career-changing traffic stop at 1:45 p.m. local time on Monday in the town of Westbrook.

Within the first several seconds of the footage, Spina is overheard reprimanding a driver after the man inquires about why the officer was following dangerously close to another motorist on Connecticut’s I-95. While Spina is clearly annoyed by the line of questioning, he tells the man “buh-bye,” but then doubles back to demand the man hand over marijuana that is presumably in plain view.

The scene quickly escalates after the man challenges the order and claims he has a medical marijuana license - which does exist in the state of Connecticut, but the ingestion of the substance remains outlawed in moving vehicles. It’s not clear whether the driver was actively using the marijuana referenced by Spina.

Be advised, the footage below contains explicit language that some may find offensive.

Spina then mocks the driver and begins to raise his voice as he repeatedly demands the driver step out of the vehicle. Though the car’s passenger-side door obstructs the camera’s view, it appears as if the officer readies his hand to unholster his weapon as he declares, “You want to f**kin’ run your mouth? No problem, you came to the right guy. Step out, come on.”

The situation deescalates as Spina asks to see the motorist’s marijuana license and clarifies that he is being detained, rather than arrested, at the moment.

While describing his side of the aforementioned tailgating situation with another vehicle, Spina’s voice quickly crescendos to the point that he is yelling about the recounted event.

“He decides to pass me and flip me off! Alright?! So who the f**k do you think you are, worrying about what I’m doing?!” he bellows at the motorist, who apologizes and says, “You’re right.”

“I know I’m right g**dammit,” Spina quickly fires back. According to the officer, it was a “stupid stunt” pulled by the detainee that made him abandon his pursuit of the other vehicle.

“You just couldn’t leave it alone, could you? You had to be a f**king American,” he says, continuing to admonish the motorist. “God help you if there’s anything illegal in this car.”

Spina’s profanity-laced rant concerning the encounter continued as he rooted through the man’s backpack and inquired about his occupation. As the recording of the traffic stop progresses, the motorist is overheard confessing to his possession of “roach weed,” and the officer’s grievances about his own job become more apparent.

“It just never f**king ends in this f**king job. I got 14 months. I can’t f**king wait to be done,” he exclaims, briefly abandoning his search of the vehicle to gesture toward the detainee.

Despite the driver’s admission to having the “roach weed” beforehand, Spina loudly announces that the marijuana he uncovered was not in its original dispensary packaging and then proceeds to break the container after aggressively slamming it on the ground.

Before slamming the detainee’s car door, Spina ensures the canister is broken by proceeding to stomp on it.

“Shut your f**king mouth and mind your own business and be on your way. Don’t you ever f**k with me again,” Spina warns.

Footage of the encounter quickly got back to Connecticut State Police Deputy Commissioner Colonel Stavros Mellekas, who described Spina’s behavior in the social media footage as “disturbing.”

“It is not indicative of the great work of the women and men of the Connecticut State Police and their dedication to protecting and serving during this pandemic,” he said in a statement provided to NBC Connecticut on Tuesday, just one day after the event occurred.

The state police announced that an investigation into the matter is now underway, and Spina has been reassigned to a desk job, so that he does not engage with the public.

The motorist in question was later identified as Kevin Jette by NBC News. Jette has since published a follow-up video regarding the situation and claims to have reached out to the police department’s internal affairs unit and various news agencies. Jette also claims he is following the situation closely to ensure that another individual does not have a similar encounter with Spina.