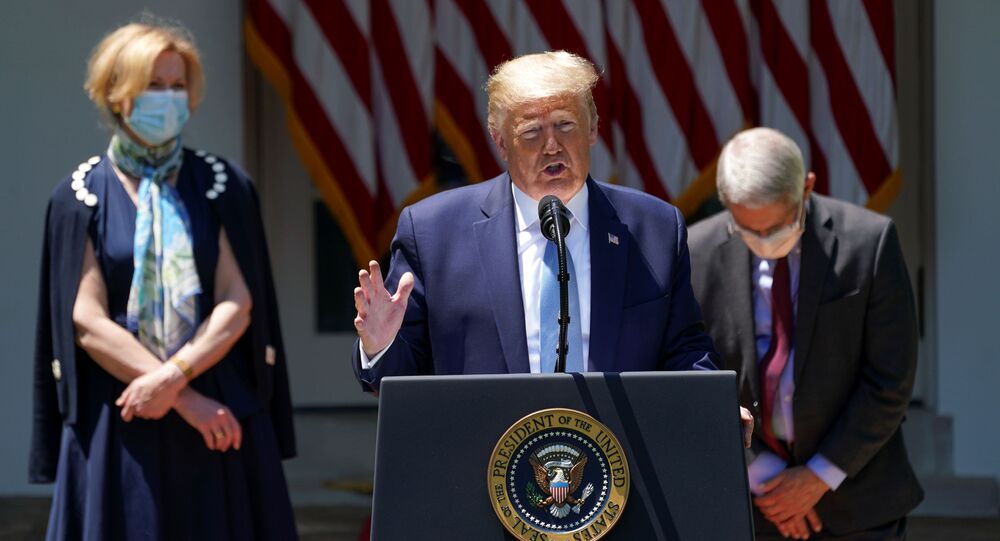 Earlier on Wednesday, US President Donald Trump again referenced a conspiracy theory related to the death of a young intern to Joe Scarborough, which happened some 19 years ago, insisting that the "cold case" against the MSNBC host be reopened.

The co-host of the MSNBC show 'Morning Joe', Mika Brzezinski, tweeted that she will discuss banning US President Donald Trump from Twitter with the social media giant's CEO, Jack Dorsey, urging Dorsey to respond immediately to how company policies are being "violated every day by President Trump".

After repeatedly addressing Dorsey in her tweets, asking him to "take down Trump's account", so that "the world would be safer", Brzezinski announced that a call with the Twitter CEO and his general council has been scheduled.

.@twitter need to know why trump is not banned?

I will be reaching out to head of twitter about their policies being violated every day by President Tump. Hope my call is taken. Please retweet if you agree

​The move was made in response to Trump in early May again evoking a conspiracy theory on Brzezinski's co-host and husband, Joe Scarborough, and the 2001 death of an intern. Trump repeatedly called to "open a cold case", labeling Scarborough a "Psycho" and calling into question investigation results that proved that the death of Lori Klausutis, a 28-year-old intern who worked for then-congressman Scarborough, was accidental.

On Wednesday, Trump again referred to the conspiracy theory surrounding the accidental death of Klausutis, adding "Low Ratings" to the "Psycho" nickname and rhetorically asking why "guys like Scarborough" are "allowed to walk the streets."

....Roger Stone has been treated very unfairly. How about that jury Forewoman, does anybody think that was fair. DISGRACEFUL! Stay tuned. @FoxNews And guys like Low Ratings Psycho Joe Scarborough are allowed to walk the streets? Open Cold Case!

According to Brzezinski's Wednesday television comments, Trump has again brought up the conspiracy theory because the president is "mad at Joe", because Scarborough "got him again".

"Donald, you’re a sick person! You’re a sick person to put this family through this, to put her husband through this, to do this just because you’re mad at Joe, because Joe got you again today, because he speaks the truth, and he speaks plainly about your lack of interest and empathy in others and your lack of ability to handle this massive human catastrophe, the fact that you have made it worse and you make it worse every day," Brzezinski said.

Scarborough earlier addressed Trump on MSNBC, commenting on the conspiracy theory and recommending that the president "take care of himself" and "maybe let Mike Pence" take over handling the ongoing coronavirus pandemic, noting that Trump's tweets cause pain to families "who've already lost a loved one".

Trump is often criticized and mocked for his tweets, whether inadvertantly revealing classified satellite photos, slamming the "fake news media" or commenting on non-existent awards, receiving nicknames like "President Tweety" - recently been invented by the presumptive Democratic US presidential nominee, Joe Biden.