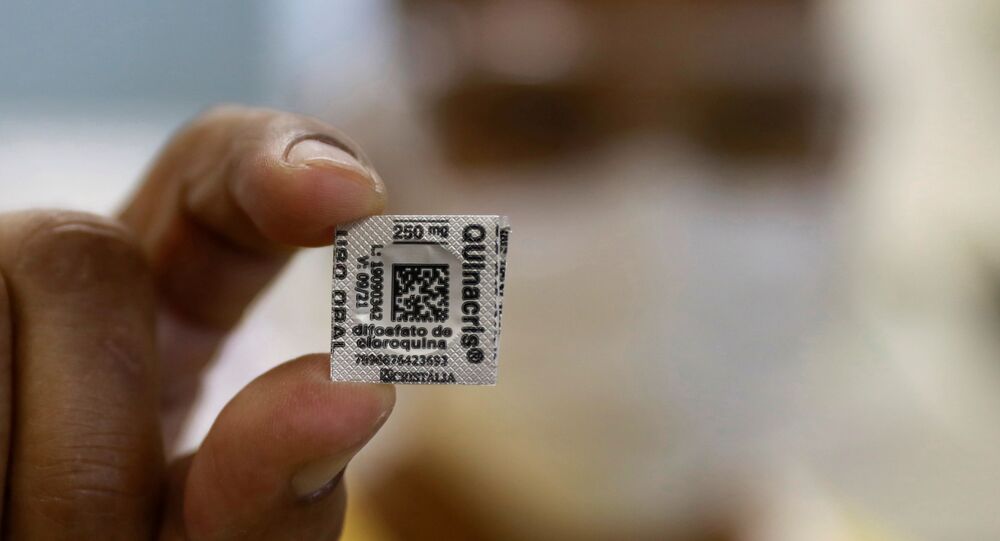 US President Donald Trump on Tuesday revealed that he will continue taking hydroxychloroquine to prevent a COVID-19 infection despite the fact that the US Food and Drug Administration (FDA) has expressed concern over the drug's side effects.

Trump's comment during a cabinet meeting comes after he revealed on Monday he was taking hydroxychloroquine with zinc daily, with his physician's approval, as a preventative measure against the novel coronavirus.

"I feel the same. I haven't changed, I don't think, too much," Trump responded when asked how he was feeling while taking the drug. When asked if anyone else in his cabinet was taking hydroxychloroquine, he responded that: "Many of them would take it if they thought it was necessary.”

​Trump also refuted the findings in a Veterans Affairs study published on April 23 that found that hydroxychloroquine administered to COVID-19 patients with or without azithromycin (an antibiotic) was "not associated with a lower risk of requiring mechanical ventilation."

According to Trump, the study was "false."

"That was a false study done. Where they gave it very sick people. Extremely sick people. People that were ready to die. It was given by obviously not friends of the administration," Trump noted.

Trump's revelation has received criticism by some medical experts.

Even though researchers and hospitals are still using hydroxychloroquine to treat some patients, the FDA has warned against the use of the drug outside of the hospital setting or a clinical trial.

“The FDA is aware of reports of serious heart rhythm problems in patients with COVID-19 treated with hydroxychloroquine or chloroquine, often in combination with azithromycin and other QT-prolonging medicines [which can cause irregular heart rhythm]. We are also aware of increased use of these medicines through outpatient prescriptions. Therefore, we would like to remind health care professionals and patients of the known risks associated with both hydroxychloroquine and chloroquine,” the FDA wrote in an April 30 statement.

Hydroxychloroquine is used in malaria and autoimmune disease treatment. Trump referred to it as a possible "game-changer" in the fight against COVID-19 after some epidemiologists suggested that the drug can be effective against the new virus, if combined with zinc and azithromycin, Sputnik reported.

Taking Hydroxychloroquine is Personal Decision for Someone to Make - Trump