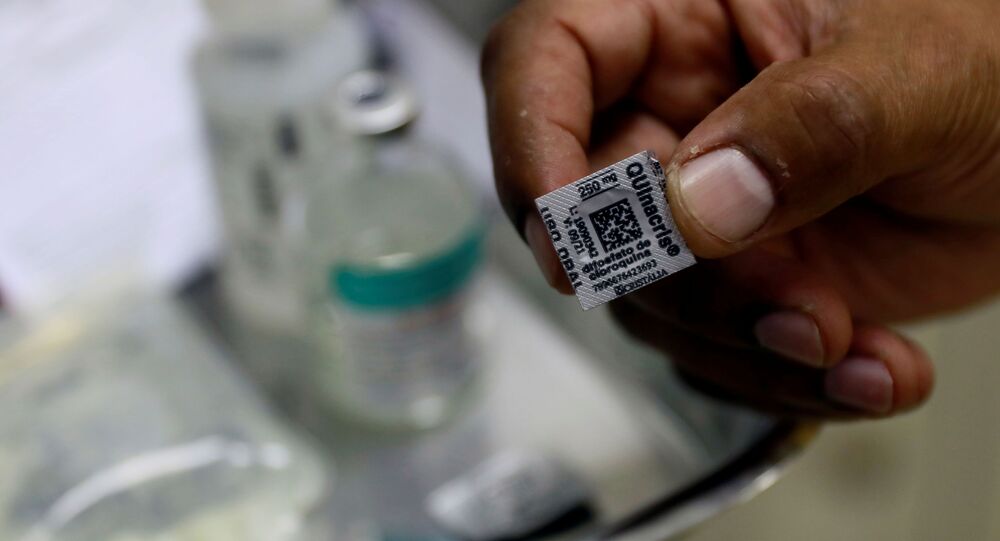 US President Donald Trump says that he is taking a decades-old drug as a preventative measure against the coronavirus, despite recommendations from his own health officials and scant evidence to support the use of the drug, which is typically prescribed to treat malaria and lupus.

Donald Trump's new comments about coronavirus prophylaxis have divided opinions along political lines, as is the case with pretty much everything he does or says.

Trump's admission on Monday that he is taking hydroxychloroquine (HCQ) with zinc every day, with physician's approval, to ward off the new coronavirus went against the Food and Drug Administration's advice that it shouldn't be used outside of hospital settings or clinical trials because it may cause side effects such as serious arrhythmia.

There is no conclusive scientific evidence to suggest that HCQ could be used to prevent an infection as well, while large-scale clinical trials are yet to be completed and several observational studies have concluded that it does not help with the virus.

The public has divided into those who accused the president of pushing an unproven coronavirus treatment and those who praised him for making an informed health decision.

Here's who said what on HCQ and its use by Donald Trump:

White House physician Dr. Sean P. Conley: "After numerous discussions [Donald Trump] and I had regarding the evidence for and against the use of hydroxychloroquine, we concluded the potential benefit from treatment outweighed the relative risks."

White House health advisor Dr. Anthony Fauci: "We’ve got to be careful that we don’t make that majestic leap to assume that this is a knockout drug...We still need to do the definitive studies to determine whether any intervention, not just this one, is truly safe and effective."

Physician and Fox News medical contributor Dr. Marc Siegel: "It is a doctor-patient decision. It should not be challenged...So I don't think it's wild or anything like that [that Trump is taking the drug]. I think it's reasonable."

Dr. Harvey Fineberg, former president of the National Academy of Medicine: "If [Trump] is taking hydroxychloroquine, it is not based upon clinical evidence of effectiveness...It is possible that this drug could be an effective drug if used early or perhaps even as a preventive, but that's rather challenging to demonstrate, and to presume that it is effective is really misplaced confidence."

Radiologist and Fox News contributor Nicole Saphier: "Studies are underway assessing effectiveness of Hydroxychloroquine prophylaxis for COVID19. It’s not outlandish that when it’s already being given quietly in parts of the US and elsewhere that the President, under the supervision of his doctor, would do the same."

Spokesperson for UK Prime Minister Boris Johnson: "It is not something which our own medical experts are recommending."

House Speaker Nancy Pelosi: "I would rather he not be taking something that has not been approved by the scientists, especially in his age group, and in his, shall we say, weight group ... 'Morbidly obese', they say."

New York Sen. Chuck Schumer: "What the president did with hydroxychloroquine was reckless, simply reckless. The experts say, every expert who has looked at it says it doesn’t help you against Covid. So he’s giving people false hope."

California Rep. Maxine Waters: "Trump says he’s been taking #Hydroxychloroquine for almost 2 [weeks]. Don’t do as Trump does or suggests. Any disinfectant, like bleach or Lysol, & ultraviolet light are not remedies. His unhinged notions could cause your death. He’d just say you sacrificed your life for the economy!"

Comedian and TV host Stephen Colbert: "Just when you think things can’t get any weirder, Trump cranks it up to 11 and then swallows the knob."

Actor and filmmaker Rob Reiner: "Dr. Trump’s prescription for fighting Covid-19: Daily dose of hydroxychloroquine washed down with a cup of bleach. He’s not only a f**king moron, he’s a deadly one."

Actress Bette Midler: "The president says he’s taking hydroxychloroquine to protect himself from Covid-19, even though it’s been shown to be completely ineffective. Side effects are paranoia, hallucinations & psychosis. I guess he’s been taking it for YEARS!"

TV host Laura Ingraham: "The reaction to Trump’s transparency about taking the hydroxychloroquine sent press into apoplexy. Do they not know that thousands of doctors and nurses have taken it as prophylaxis since outset both here and around world?"

TV talk show host Trish Regan: "The media’s attack on @realDonaldTrump for saying he’s taking #hydroxychloroquine proves they have no faith in INDIVIDUALS to make their own, informed, medical decisions. They want to decide EVERYTHING for the masses! Options, discussion, and individual freedom NOT allowed."

National Review senior writer David Harsanyi: "Killing a unborn baby is a decision made solely by a woman and her doctor. Taking hydroxychloroquine is a joint decision between a man, his doctor, every Democrat in congress, and all on-air talent at CNN."

Journalist and author Bill O'Reilly: "Barack Obama said he used cocaine in high school and the press didn’t care. So why the angst against President Trump for taking hydroxychloroquine? If the remedy is useless, so what? Why do they care?"