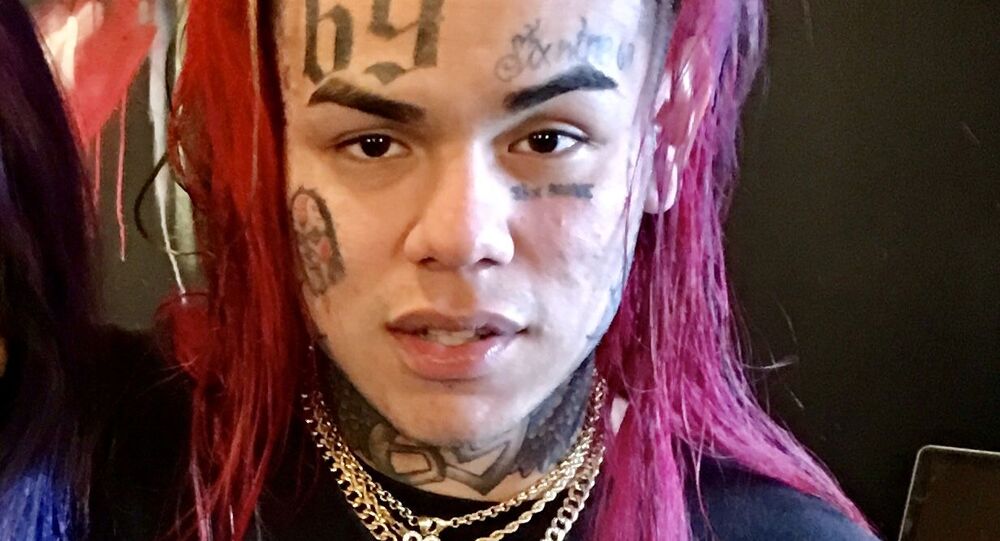 Grande and Bieber pushed back against the accusations, saying that it was Billboard's weighting approach and their fans who helped them get the No. 1 Spot in the Billboard Hot 100. The chart has also denied claims of corruption and insisted that the Grande/Bieber collaboration 'Stuck With U' had won fair and square.

American rapper Tekashi 6ix9ine has accused Billboard of rigging their charts after a song by Ariana Grande and Justin Bieber beat out his new track.

Tekashi released 'Gooba', the lead single to his upcoming 2020 studio album, on 8 May, the same day the pop star duo put out the self isolation-themed song 'Stuck With U'.

Their collaboration landed on the top spot on Billboard Hot 100 that week. 'Gooba' debuted at No. 3, below Doja Cat's 'Say So' remix with Nicki Minaj.

Tekashi, who is under house arrest on charges accusing him of involvement with the street gang Nine Trey Gangsta Bloods, then shared an Instagram video accusing Grande and Bieber of stealing the top spot.

He showed forecasts that were allegedly sent to major record labels last week. The initial email put 'Say So' at No. 1, followed by 'Gooba'. 'Stuck With U' was purportedly projected to come in fifth.

What are the accusations?

The rapper also insinuated that 60,000 units of 'Stuck With U' were submitted to Billboard just before the end of the sales period, while half of them were bought by just six people. He added that Billboard refused to share information about who the credit cards linked to the purchases belonged to.

Tekashi then accused Billboard of discounting 20 million of his song's 50 million digital streams (Billboard compiles its weekly chart according to sales, streaming, and airplay). "It's all manipulated," he said. "It's all fabricated. You can buy No. 1s. This is what these artists do, and it's not fair."

How did Grande and Bieber respond?

The 'Thank U, Next' hitmaker rebuffed the claims in a lengthy Instagram post in which she insisted that its was her and Bieber's fans that bought the song and helped it climb atop the chart. She also pointed to the Billboard rules that limit sales to four per person.

Bieber likewise defended the duo; he explained that sales weight more than streams, and that a portion of Tekashi's streams was disregarded because they came from a global count, while Billboard only tracks US-based plays. He went on to explain that the last-minute disclosure of 60,000 units was part due to their team's effort to keep the sales in secret until the deadline.

"60,000 units came because we don't disclose our numbers until end of week," Bieber said. "That's called strategy." He also denied the claims that 30,000 'Stuck With U' units were purchased by six credit cards as a "lie".

"The rules are clear one credit card can buy max 4 copie," he wrote. "Anything over that the entire amount gets thrown out. Neilsen company checks this and found all our sales were legit because our fans are amazing and bought them."

What did Billboard say?

Billboard in a statement reiterated Bieber's assertion that it counts only US streams. Under this rule, 'Gooba' had only 55.3 million streams counted by the chart despite having more than 180 million views on YouTube.

The statement also said that the Hot 100 forecast Tekashi referenced in his Instagram video was not created nor provided by Billboard to labels: "Those with access to sales, streaming and radio data from various sources often create their own chart models and update them at their own frequency. Billboard does not distribute any Hot 100 ranking forecast to labels, management or artists."

Responding to the 60,000-unit sales spike, Billboard linked it to sales in Grande and Bieber's webstores. "A signed single or album is an accepted form of sales available to any artist and has been noted repeatedly within Billboard chart stories when such items have impacted the Hot 100. 6ix9ine, meanwhile, released a non-signed CD single/digital download on the last day of the tracking week via his webstore," read the statement.

Billboard did not explicitly deny that there was fraudulent activity regarding last-minute sales, but insisted that it always monitors all sales and works to remove "excessive bulk purchases" from final sales total. It said it had applied the same level of scrutiny to 'Stuck With U' sales.