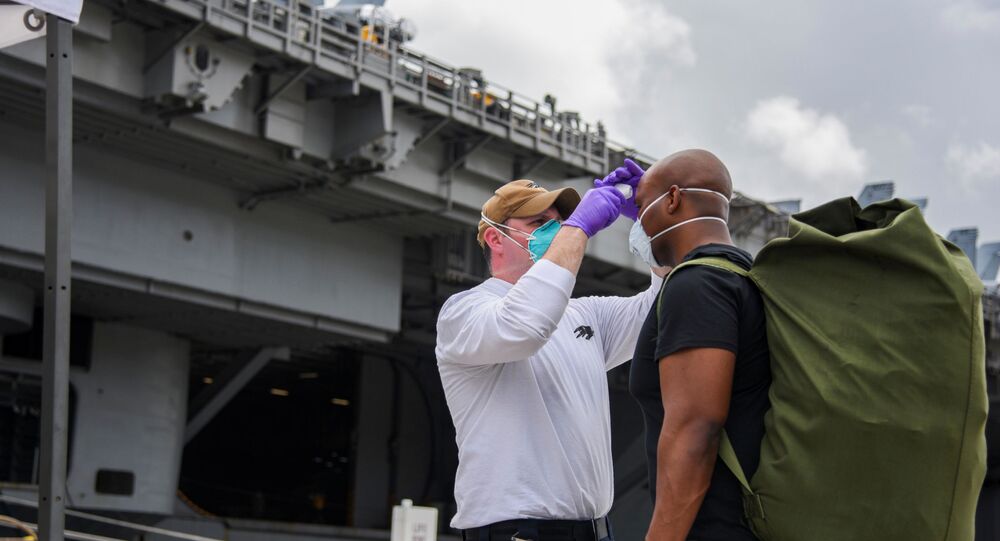 In late April, the US Navy said in a statement that crew members from the aircraft carrier Theodore Roosevelt had started returning to the vessel for the first time since they were earlier moved ashore because of the COVID-19 outbreak on board.

At least five sailors have again tested positive for the novel coronavirus after returning to the USS Theodore Roosevelt and resuming duty there, Navy spokesman Commander Myers Vasquez told CNN on Friday.

He explained that these crew members previously tested positive for COVID-19 and were then moved ashore, meeting “rigorous recovery criteria” when in isolation.

“The five [Theodore Roosevelt] sailors developed influenza-like illness symptoms and executed their personal responsibility by reporting to medical for evaluation”, Vasquez pointed out.

He said that they were “immediately removed from the ship and placed back in isolation, their close contacts were mapped, and they are receiving the required medical care”.

CNN also cited an unnamed US official as saying that about 18 other Theodore Roosevelt sailors who came in close contact with the infected crew members have also been taken off the ship and put under quarantine “out of an abundance of caution”.

The developments come after the Navy said in a statement on Thursday that more than 2,900 aircraft carrier sailors had returned to the vessel since at least three sailors on board the Theodore Roosevelt tested positive for COVID-19 in March.

The statement followed US President Donald Trump saying in early April that he supported a decision to remove USS Theodore Roosevelt Captain Brett Crozier over his “inappropriate” email regarding the COVID-19 outbreak on board the aircraft carrier.

“I didn’t make the decision, the Secretary of Defence was involved and a lot of people were involved. I thought it was terrible what he did, to write a letter? This isn’t a class of literature”, Trump said at the time.

This was preceded by then-US Navy Acting Secretary Thomas Modly announcing that he had decided to remove Crozier because the captain improperly sent an email about his concerns regarding the coronavirus outbreak on the ship using channels that were not secure to convey confidential information.

Modly resigned shortly after a leaked audio revealed last month that he described Crozier as "stupid" in an address to the ship's crew.

Also in April, the US Navy said that more than 3,900 sailors from an approximately 4,800-strong Theodore Roosevelt crew had been moved ashore to the Guam base. An unnamed senior Navy source, in turn, was quoted by CNN as saying late last month that at the time there were COVID-19 cases on 26 US Navy warships, which are in port or maintenance yards.

According to Johns Hopkins University info, the US remains the worst-hit country, confirming over 1.4 million cases and around 85,000 fatalities from the coronavirus.