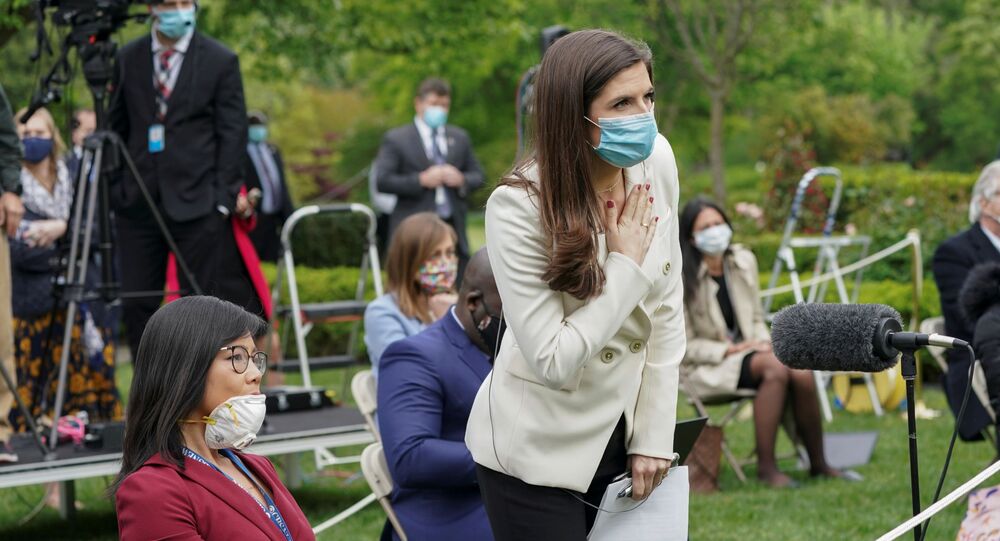 US President Donald Trump abruptly concluded his Monday press briefing at the White House Rose Garden after telling a Chinese-American reporter to “ask China” why people around the world are dying from the COVID-19 novel coronavirus.

Trump’s touting of the US’ COVID-19 testing capacity was brought into question on May 11 when CBS News White House correspondent Weijia Jiang highlighted that despite the amount of tests available, “Americans are losing their lives, and we’re still seeing more cases every day.”

Rather than explain why he chooses to focus on testing capacity, Trump simply told the reporter, who is Chinese-American, that she should “ask China” why people are dying around the world from the novel coronavirus and then see what kind of answer she gets.

President Trump walked out of a press conference abruptly after he got into an argument with CBS’ @weijia and refused to take questions from CNN’s @kaitlancollins pic.twitter.com/MqIh49QkKC

“Sir, why are you saying that to me, specifically?” the journalist asked.

“I’m not saying it specifically to anybody,” Trump responded, insisting that he’d have the same response for anyone who asked such “a nasty question.”

The US president then called on CNN’s Kaitlan Collins, reprimanded her for being too slow and selected another reporter before ultimately just ending the briefing altogether and walking away from the podium.

“Ask China” quickly trended on Twitter following the conference, and everyday netizens and fellow members of the press were quick to come to the CBS correspondent’s defense on social media.

The one two punch of Weija Jiang and Kaitlynn Collins did him in today. I watched it happen live and I cheered.

Diaper change. Weija caused him to poop himself.

Annnnd Trump just profiled an Asian American reporter in the Rose Garden. She asks him why he’s making this a global competition and he says to her ‘Why don’t you go ask China”... She took him to task and asked ‘Why are you saying that to me?’ and his bitch ass ends the briefing.

God bless @weijia for not putting up with that nonsense even as she did her job.

My Superheroes. Two Strong Women, that terrify the President. He can’t stand up to them. @weijia @kaitlancollins pic.twitter.com/BHuobG0clv

agree 100%. @weijia was discriminated for her race and disregarded for her question. https://t.co/LuOpLqWK6U

This is not an easy thing for any reporter to do, standing before the president of the United States. It’s so much easier to grin and bear it. Full props to @weijia. https://t.co/r0TXYGFhdm

Trump asked CBS's @weijia, who is Asian-American, to "go ask China" her question. He then refused to let CNN's @kaitlancollins ask a question - and then abruptly ended the press conference and walked out like a child.

This was not the only notable moment from Trump’s Monday briefing, however.

“We have the greatest capacity in the world,” he claimed, but also insisted “there’s no reason” for someone to seek out a COVID-19 test if they “feel good” and don’t exhibit signs such as the “sniffles” or a “sore throat,” ignoring the possibility of an asymptomatic infection as well as the virus’ two-week incubation time, during which a carrier is still contagious.

This false statement is just one of many moments the US president gave American citizens incorrect or dangerous information, such as his claim that the novel coronavirus will be “eradicated” without a vaccine, or his floating of the idea that COVID-19 could possibly be treated through the intravenous administration of disinfectants.

Though the US Centers for Disease Control and Prevention lists individuals with symptoms as a priority for testing - especially if the patient is hospitalized - within its guidance, testing criteria vary between states.

Though the US has administered nearly 9.4 million COVID-19 tests, the fact remains that the country has been heavily impacted by the novel coronavirus-related deaths of more than 80,000 people, according to data from Johns Hopkins University. Over 1,346,000 cases of the contagious disease have been confirmed in the US, and more than 232,700 recoveries from the virus have been reported.