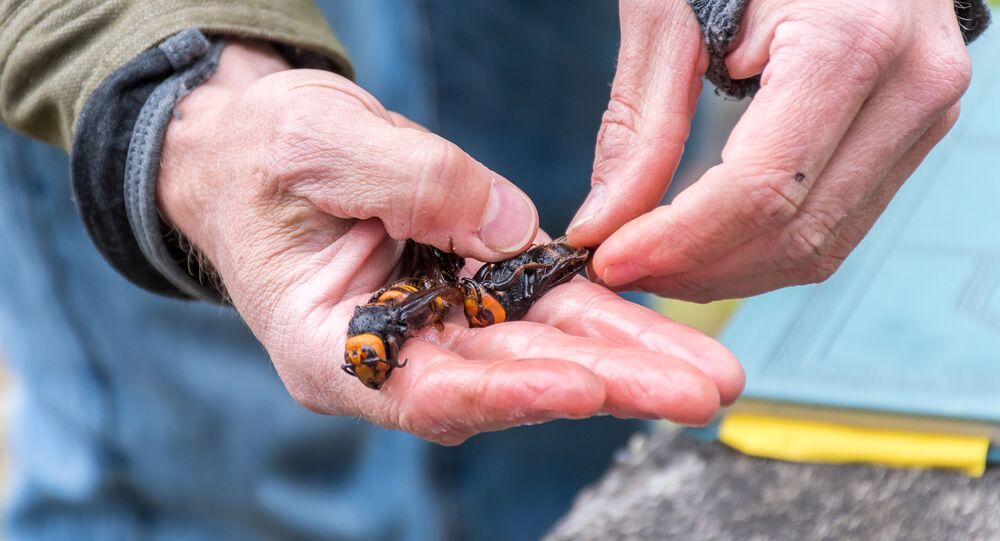 On 2 May, the large killer hornets, some over 5 centimetres long and known to live in the forests of East Asia, were spotted for the first time in the United States.

Panic over reports about seeing the so-called 'murder hornets' in the United States can put essential native bee populations at high risk, warns Dr. Doug Yanega, a professor of entomology at the University of California, Riverside, according to The Los Angeles Times.

As was reported last weekend, two specimens of the Asian wasp were spotted for the first time in the US state of Washington, and media panic loomed nationally, leading some people to “needlessly” kill native beneficial wasps and bees, the professor noted.

“Millions and millions of innocent native insects are going to die as a result of this,” Yanega said. “Folks in China, Korea and Japan have lived side by side with these hornets for hundreds of years, and it has not caused the collapse of human society there. My colleagues in Japan, China and Korea are just rolling their eyes in disbelief at what kind of snowflakes we are”.

The New York Times reported on 2 May that a beekeeper in Custer, Washington, had found an entire hive of bees decimated in November 2019, before the first two giant hornets were spotted within the state.

The Asian hornets are said to have sharp mandibles that potentially allow them to “wipe out a honeybee hive in a matter of hours”. They are also considered a credible threat to humans as well, as the hornets kill up to 50 people every year in Japan.

Following the NY Times report, the Washington State Department of Agriculture stated that the insect has been spotted only in Washington, warning that there was no need to trap “desirable” local bee populations.

“There are no known sightings of Asian giant hornets anywhere else in the United States and trapping for them there will likely do more harm than good by catching native desirable insects. PLEASE DO NOT TRAP FOR ASIAN GIANT HORNETS IF YOU LIVE OUTSIDE OF WASHINGTON STATE,” the statement of the department read.

Acknowledging the potential danger of the Asian hornets, Yanega noted that people across the country have so far trapped only native insects.

“I don’t want to downplay this — they are logistically dangerous insects. But, having people in Tennessee worry about this is just ridiculous,” Yanega added. “The only people who should be bothering experts with concerns about wasp IDs are living in the northwest quadrant of Washington (state). And really, right now, nobody else in the country should even be thinking about this stuff”.

Others noted that the panic surrounding the insects is more dangerous that the insect itself, according to the Los Angeles Times.

“The number of people who are stung and have to seek medical attention is incredibly small. The worry for beekeeping in Washington is based on a worst-case scenario that officials have to take seriously,” said Chris Looney of the Washington Agriculture Department.