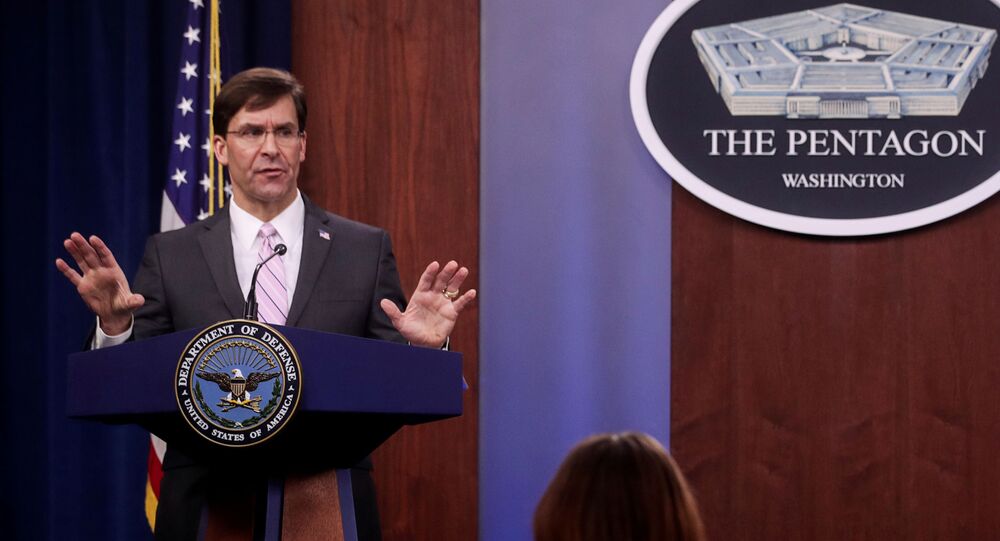 The coronavirus pandemic has claimed over 77,000 lives in the US alone, the highest national death toll in the world. The global lockdown has forced nations to celebrate the 75th anniversary of the end of World War II mainly online.

US Defence Secretary Mark Esper wore no mask at a gathering of aged World War II veterans who also wore no protection, a move that shocked many, particularity on social media. Esper was accompanied by US President Donald Trump, who greeted the veterans from a standing position several metres away, but also without a mask.

The Defence Secretary was handing out "challenge coins" to the veterans from his pocket, when one of the old fighters grasped his elbow.

Netizens slammed the actions of the administration, accusing the Trump administration of having "no sense of responsibility, or duty of care".

Secretary Esper, maskless, got within inches of veterans aged 96-100 and handed out coins.

The veterans were “choosing nation over self,” the White House said.

​Users blasted the Trump administration for not bothering to follow rules they shaped themselves.

The virus is in the white house, anyone can be infected. Why would he put these veterans in harm's way by not wearing a mask and handling coins without gloves? All just for a photo op?

​Some suggested that it is common not to stick to anti-coronavirus measures in the Trump administration, as the president earlier asserted that wearing mask will "send the wrong message".

Do not expect too many from @realDonaldTrump @Mike_Pence administration to wear masks. Trump must have said to them, "Don't wear it, or you are fired." Could it be? Even if not, it is implied.

​Users were outraged, stressing that reckless behavior leads to "the slaughter of the Greatest Generation".

I'll bet if we asked the Greatest Generation to make one more sacrifice for us in the way of population control, they wouldn't hesitate, because they know what real sacrifice means.
This is leading them to slaughter!
So effing wrong!!!

Some slammed the White House claim that the veterans - in choosing to attend the Trump event - "chose the nation over themselves".

Were they asked if they wanted to “choose Nation over self”?

Currently, the number of COVID-19 cases in the US has eclipsed 1,280,000 with the death toll over 77,000, as the US remains the most coronavirus-affected country in the world, according to data assembled and displayed by the Johns Hopkins University.

​Celebrations commemorating the 75th anniversary of the end of World War II have primarily taken place online due to the pandemic. Landmarks in London in Berlin have been illuminated to mark the celebration.