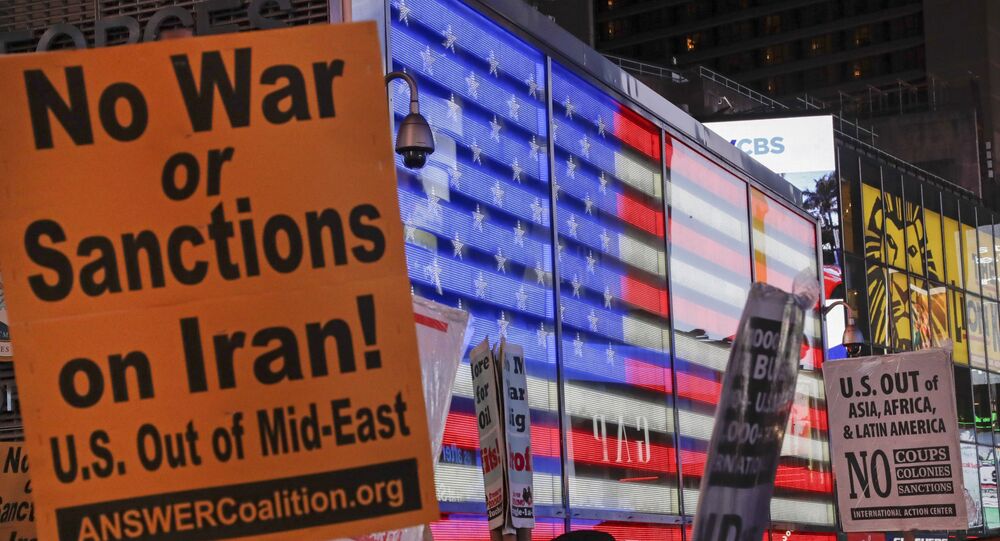 US Reportedly in Negotiation With Tehran For Prisoner Exchange, Release of American Navy Vet

An American prisoner, recently recovered from a COVID-19 infection, has, since 2018, been serving a sentence of 10 years in Iran on charges of insulting Iran’s Supreme Leader, Ali Khamenei, and for privacy violations.

The administration of US President Donald Trump and the Iranian government are negotiating a prisoner exchange deal to release a US Navy veteran incarcerated in Iran in exchange for an Iranian-American doctor detained in the United States, The New York Times reported on Wednesday, citing an Iranian diplomat and a representative of the family of the veteran.

Abolfazl Mehrabadi, deputy director of the Iranian interests section at the Pakistan Embassy in Washington, told the outlet that Washington is seeking to exchange former US Navy service member Michael R. White, 48, with an Iranian-American doctor.

Mehrabadi, who refused to name the doctor in question, said he was out on bail. The official noted, “The talks have not reached a conclusion yet”.

Jonathan Franks, a spokesperson for White’s family, said that he has been informed that Washington and Tehran are engaged in negotiations to exchange the two prisoners.

“If the Iranians have a symmetrical deal on the table we would love for the administration to take it and bring Michael home,” Franks said, cited by The New York Times.

White was temporarily released from prison in late March, as part of a prisoner furlough, after testing positive for the novel coronavirus (COVID-19) disease. He had been in the custody of the Embassy of Switzerland in Tehran, which represents US interests in the nation.

Franks said that the veteran, who has previously survived cancer, has recovered from the infection.

White was said to have traveled to the Islamic republic to meet an Iranian woman he had met and fallen in love with through the Internet. He was sentenced to 10 years in prison in Iran in 2018 on charges of insulting Iran’s Supreme Leader Ali Khamenei and for privacy violations.

According to the outlet, at least four US citizens, including three of Iranian descent, are imprisoned in Iran on charges of espionage. The US is said to be detaining about 20 Iranian nationals.

“We work with the Swiss every day on the health, safety, and release of US citizens wrongfully held in Iran,” said Morgan Ortagus, a spokeswoman for the US Department of State. She claimed that bringing home detained Americans was a priority for the Trump administration.

The Iranian diplomat in Washington said that the other three US prisoners with dual citizenship are not part of the undergoing exchange negotiations.

Mehrabadi also said that the United States should expedite the release of Sirous Asgari, 59, an Iranian-American scientist who was acquitted in November 2019 by a US federal court and is currently in the custody of Immigration and Customs Enforcement (ICE) awaiting deportation, as a condition for expediting the release of White.

“These three cases are entangled together, Asgari, White and the Iranian American doctor,” Mehrabadi said.

Asgari was acquitted of charges of stealing trade secrets in violation of sanctions while on a sabbatical visit at a university in Ohio. Last week, he also tested positive for COVID-19 while detained by ICE.

Relations between the United States and the Iran deteriorated after US President Donald Trump in 2018 unilaterally pulled Washington out of the 2015 Iran nuclear deal, or the Joint Comprehensive Plan of Action (JCPOA), and reimposed harsh economic sanctions against Tehran.

Relations deteriorated further following the targeted assassination of top Iranian general Qasem Soleimani by a US drone strike in Baghdad on 3 January 2020.

At the present time, Washington is seeking to extend the United Nations ban on the sale of conventional weapons to Iran that is set to end in October, as part of the Trump administration’s policy of so-called 'maximum pressure' on Tehran.