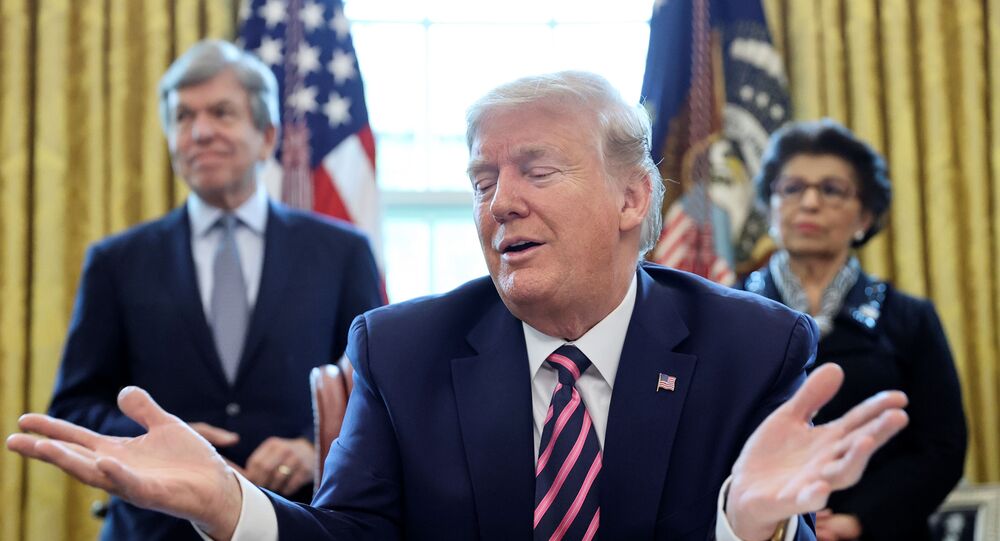 US President Donald Trump has vetoed a bill that would have reined in his power to unilaterally make war against Iran. The bill was passed by lawmakers after the White House's January decision to assassinate a leading Iranian general without notifying Congress, bringing the region to the brink of war.

In March, federal lawmakers passed a resolution amending the War Powers Act of 1973 by requiring the president to obtain Congressional approval before ordering military actions against other states.

"Congress should not have passed this resolution," the White House said in a Wednesday news release on Trump's behalf announcing the veto decision.

"This was a very insulting resolution, introduced by Democrats as part of a strategy to win an election on November 3 by dividing the Republican Party," the statement read. "The few Republicans who voted for it played right into their hands."

Trump further argued the resolution was "based on misunderstandings of facts and law," adding that his January 3 order to assassinate Iranian Quds Force commander Maj. Gen. Qasem Soleimani with a drone strike outside Baghdad Airport "was fully authorized by law, including by the Authorization for Use of Military Force Against Iraq Resolution of 2002 [AUMF] and Article II of the Constitution."

"Finally, S.J. Res. 68 would have greatly harmed the President’s ability to protect the United States, its allies, and its partners," the statement continued. "The resolution implies that the President’s constitutional authority to use military force is limited to defense of the United States and its forces against imminent attack. That is incorrect. We live in a hostile world of evolving threats, and the Constitution recognizes that the President must be able to anticipate our adversaries’ next moves and take swift and decisive action in response. That’s what I did!"

At 1:30 p.m. on Thursday, the US Senate will attempt to override the president's veto. Such a move would require a two-thirds majority, as opposed to the simple majority it required to pass the bill - something the body is unlikely to achieve, despite the bill's bipartisan support.

Kaine on Trump vetoing Iran war powers resolution: I urge my colleagues to join me in voting to override his veto. Unless there’s a carefully reached consensus in Congress that war is necessary, we should not be sending our troops into harm’s way.

​The War Powers Act of 1973 was introduced in the closing days of the US war in Vietnam in an effort to block future presidents from unilaterally taking the US into a major conflict, as US President Lyndon B. Johnson did in 1964. While the law recognizes that the president has the power to deploy US forces into combat without a formal declaration of war, it requires them to give Congress at least 48 hours notice and establishes a 60-day time limit. Military operations beyond that scope require congressional authorization.

In a separate statement addressed directly to the US Senate, Trump urged the upper legislative house not to override his veto, arguing the resolution is "unnecessary and dangerous."

After laying out the administration's case for why Soleimani had to be killed when he was - namely, the claim that he was personally responsible for a palpable uptick in attacks on US forces in weeks prior to his death and was planning more - Trump went on to argue that the very purpose of the resolution is moot.

"On January 7, 2020, Iran launched 16 ballistic missiles against United States and coalition forces in Iraq. These attacks resulted in no fatalities ... One day later, this resolution was introduced. Its apparent aim was to prevent an escalation in hostilities between the United States and Iran. Yet no such escalation has occurred over the past 4 months, contrary to the often dire and confident predictions of many," the statement said.

Further, Trump argues that the airstrike was legal under the 2002 AUMF because "The United States has long relied upon the 2002 AUMF to authorize the use of force for the purpose of establishing a stable, democratic Iraq and for addressing terrorist threats emanating from Iraq."

"Such uses of force need not address only threats from the Iraqi Government apparatus, but may also address threats to the United States posed by militias, terrorist groups, or other armed groups in Iraq. This has been a consistent application of the statute across Administrations, including the last Administration, which relied upon it to conduct operations in response to attacks and threats by Iran‑backed militias in Iraq," the US president said.