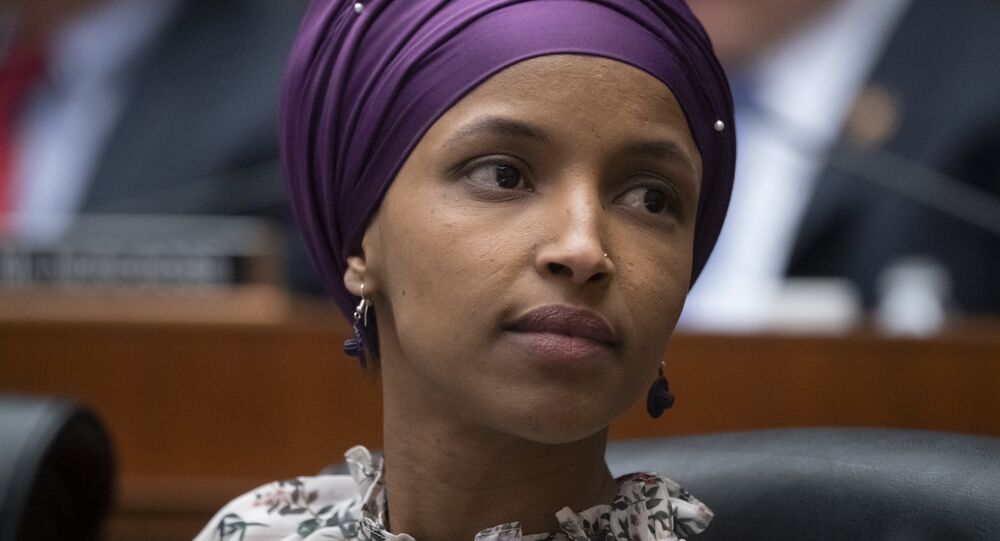 'She is a Disaster': Trump Backs Ilhan Omar's Opponent in US House of Representatives' Elections

The US president claimed that Ilhan Omar is looking to increase taxes and that she hates the US military and veterans, as he delivered his endorsement via social media.

US President Donald Trump has endorsed Lacy Johnson, a Republican candidate who is now poised to challenge Rep. Ilhan Omar (D-Minn.) in the upcoming 2020 US House of Representatives elections.

Delivering the announcement via Twitter, Trump stated that he believes Johnson deserves his endorsement, and that "Omar is a disaster", accusing the Democratic congresswoman of seeking to impose "much higher taxes" and of hating the US military and veterans, among other things.

And I’m Endorsing you also Lacy, you truly deserve it. You are doing a great job, and Omar is a disaster who wants much higher taxes, hates our Military & our Vets, demands Open Borders, and is fighting to take away our great 2nd Amendment. Good luck Lacy! https://t.co/RunIPCbTyc

​The president's tweet attracted the attention of social media users who didn't seem to think highly of Omar and who rooted for her opponent.

Anyone who will remove Ilhan Omar is what we need to get behind. Ilhan is a true danger to America, Israel and so many of our beloved American communities. Her ideas are dangerous, radical and truly antithetical to what this country was founded upon.

Ilhan Omar is an absolute disaster and embarrassment to the United States Congress. She must be voted out.

Every day that Ilhan Omar sits in the House is a disgrace to our nation.

Go Lacy! Get rid of that America-hating Omar!

Lacy Johnson himself also thanked Trump for the endorsement.

Thank you Mr. President. We need to keep using O Zone to build and grow ECONOMIES in neighborhoods like mine; rebuilding lives and FAMILIES with criminal justice reform, etc; improving EDUCATION with HBCU funding, etc; and get America back to work in a healthy way for all.

​Yet there were also those who slammed the US president, with a number of netizens criticizing him over his handling of the coronavirus crisis, and arguing that an endorsement from Trump would do more harm than good.

70,000 dead Americans, over a million infected & 30 million unemployed because of your genocidal negligence. An endorsement from you is a death sentence, you genocidal gaslighting ghoul. #TrumpGenocide

Shame on you, 68,000 people are dead, hundreds of thousands are unemployed, going with food, rent, @IlhanMN is fighting for the people while you’re campaigning during #COVID19 pandemic shame on you.

Lacy Johnson has announced his intent to challenge Omar for her congressional seat in a campaign video he shared last week on Twitter, noting that he feels humbled by the fact that the GOP endorsed him with a 90 percent vote.

According to the Star Tribune, Johnson is a North Minneapolis entrepreneur and a former IT professional who ran unsuccessfully for the Legislature in 2018.

As Johnson explained to the Townhall, he is aiming for two particular categories of voters: the "concerned Minnesotans who see what Omar is doing and think she’s almost an embarrassment to the district and state, and they’re looking for someone to run against her", and "open-minded individuals who don't have a stomach for partisan politics".