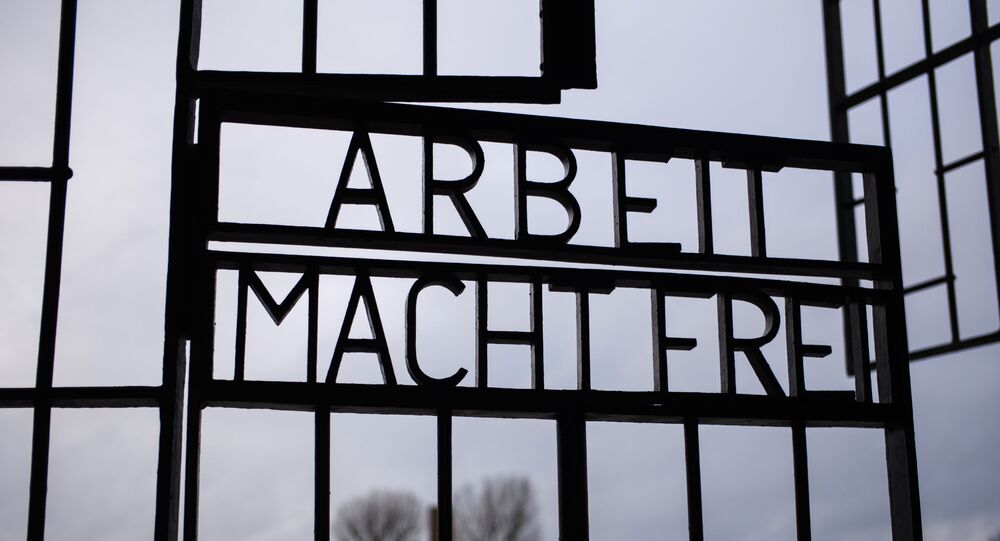 A woman brandished the controversial banner during a rally in Chicago. Illinois Governor JB Pritzker this week announced plans to start gradually reopening parts of the state where the infection rates and the occupancy of intensive care units have been falling steadily.

The Auschwitz Memorial has condemned an American protester for using a Nazi slogan during a protest against the coronavirus-induced lockdown.

A photo that surfaced on social media from Friday’s ‘Reopen Illinois’ rally in Chicago showed a woman holding out a banner reading, “Arbeit Macht Frei, JB”.

“Arbeit Macht Frei” is a German phrase for “Work sets you free”; it has been infamously used at the entrance of several Nazi concentration camps, including Auschwitz, in present-day Poland, where over 1 million people were killed during WW2. “JB” was an apparent reference to JB Pritzker, the Jewish governor of Illinois.

“Those words became one of the icons of human hatred,” the Auschwitz Memorial said of the slogan. “It's painful to see this symbol instrumentalised & used again to spread hate. It’s a symptom of moral & intellectual degeneration.”

"Arbeit macht frei" was a false, cynical illusion the SS gave to prisoners of #Auschwitz. Those words became one of the icons of human hatred. It's painful to see this symbol instrumentalized & used again to spread hate. It's a symptom of moral & intellectual degeneration. https://t.co/ZRxja8x6eS

According to Dennis Kosuth, the witness who took the photo, the protester assured him that she was not a Nazi, and had Jewish friends.

The veracity of his photo was called into question after the Associated Press debunked an image from a similar protest in Pittsburgh, Pennsylvania as fake. In it, a person was waving a sign sporting the slogan in English.
However, Kosuth insisted that his photo was genuine and tweeted a video from the scene to prove that was the case.

Large protests against the lockdown, which contributed to an economic downturn and caused a historic spike in unemployment, have been happening across the country, from New York to California, since mid-April.

President Donald Trump has left it up to governors to call the shots when it comes to reopening their states, with help from the federal government, and presented a phased-in plan which has already seen a dozen states reopen some businesses and ease social distancing restrictions.

The US has registered more than 1.1 million COVID-19 cases and almost 66,400 deaths, according to a database kept by John Hopkins University.