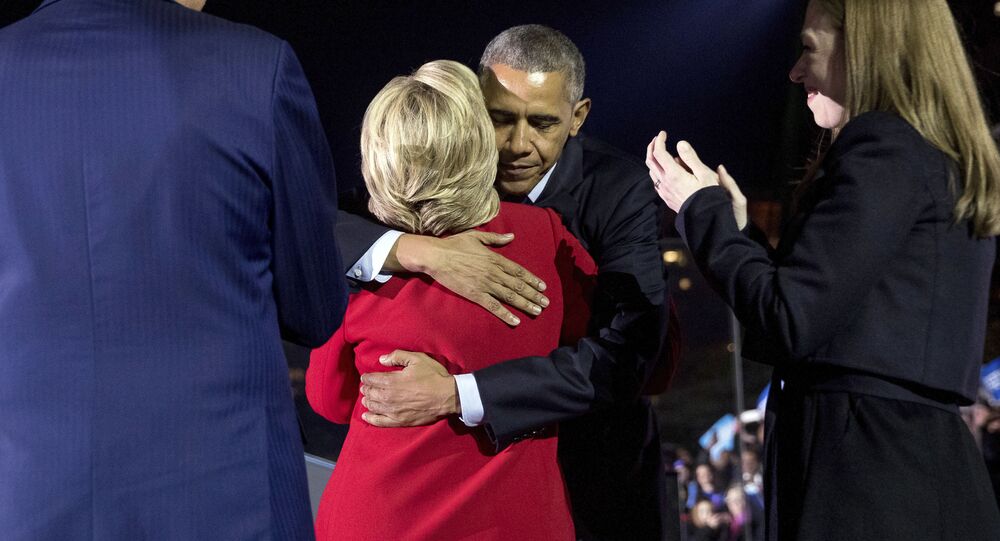 Former US Vice President Joe Biden has emerged as the presumptive Democratic party presidential nominee after his rivals suspended their campaigns. However, following a number of mounting scandals, including allegations of sexual assault, Biden might be losing ground.

Former Presidential Democratic candidate Hillary Clinton and 44th President of the United States Barack Obama may run under one ticket against Donald Trump in November, if Joe Biden drops out of the race, an opinion contributor for the Hill magazine, Douglas MacKinnon, suggested.

MacKinnon, who was a writer in the White House during the administrations of Presidents Ronald Reagan and George H.W. Bush, believes that this “truly out-of-the-box combination” with Clinton nailing the nominee position and Obama selected as her running mate, could create some real “trouble” for the incumbent president’s campaign in swing states and in terms of the overall vote calculus in general.

“Could such a scenario come to pass? If Biden flames out and the Democrats don’t want to hand the election to Trump, they would need to do something incredibly creative in a flash”, the political consultant wrote.

The alliance may face some legal trouble as the twenty-second Amendment to the US Constitution specifies that “no person shall be elected to the office of the President more than twice”, suggesting that Barack Obama would not be allowed to run alongside Clinton. However, MacKinnon believes that as the former president will be chosen to succeed Clinton rather than “elected” to the position in case anything happens to the acting president while in office, this does not contradict the law and makes it a more likely scenario.

MacKinnon’s article comes as former vice president and presumptive Democratic nominee Joe Biden is facing growing pressure following sexual allegations from his former Senate staffer Tara Reade that date back to 1993, as well as some traces from the scandal surrounding his son Hunter’s business dealings in Ukraine and speculation about the state of his mental health.

All this made the political consultant suggest that Biden may be forced to withdraw from the presidential race, leaving the position vacant. However, surprisingly, MacKinnon does not mention Vermont Senator Bernie Sanders as a potential replacement for the nominee position, although the Vermont Senator previously only “suspended” his presidential campaign, without formerly ending it, hinting at the possibility that his presidential bid might be far from over.

© AP Photo / Matt Rourke
'He Should Respond': Trump Weighs in on Sexual Assault Allegations Against Joe Biden
So far, Joe Biden has dismissed all the accusations. On 1 May he addressed the sexual assault claims from his farmer staffer for the first time, saying that the alleged incident never took place.

The Democratic National Convention, that will be held in mid-August, will finally confirm who will represent the party during the 2020 presidential elections as it seeks to deny president Donald Trump a second term.